Firefox Send, Mozilla’s free, encrypted file-transfer service, is officially launching to the public today following its debut as a “Test Pilot” experiment back in August 2017. The service allows web users to share files up to 2.5 GB in size through the browser, while protecting them with end-to-end encryption and a link that automatically expires to keep the shared files private.

When Mozilla first began testing the web-based Send tool, file shares were limited to 1 GB. Today, that remains the limitation until users sign up for a free Firefox account. They can then opt to share files up to 2.5 GB.

The system offers an alternative to email, where larger file attachments are more of an issue, as well as cloud storage sites, like Google Drive and Dropbox, which can be time-consuming when all you need to do is share a single file one time — not store the file, edit it or collaborate with others. 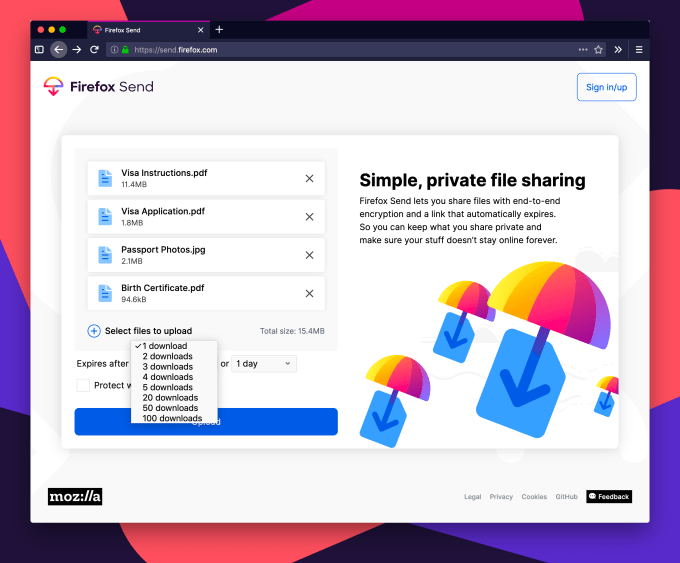 To use the service, the sender visits the Send website, uploads the files and sets an expiration period — a design choice seemingly inspired by Snapchat and its concepts around ephemerality. You also can opt to have the files protected with a password before sending.

Firefox Send then offers a link you can give to the recipient however you see fit, which they simply click to start the download. They will not need a Firefox account of their own to access the files, Mozilla notes.

The organization suggests that the new tool could be used for moving files around the web that you otherwise had worried about sharing — like financial information, for example.

However, security experts would still caution the use of any tool for sharing highly sensitive files through an online service, as there’s always the potential that something could go wrong with regard to unauthorized access.

That said, Mozilla is one of the more trustworthy organizations when it comes to things like this. Send, it says, is “Private By Design,” which means all files are protected. It designed Firefox accounts so users never send Firefox their passphrase, for example. It also says it stands by its mission to “handle your data privately and securely,” writes Mozilla in an announcement today. That speaks more to the organization’s ethos — that it believes privacy is a fundamental right.

Still, security experts need to test systems first-hand before signing off on their trustworthiness. As Send is only this morning debuting in its official, public iteration, that hasn’t yet been done.

The new tool could help Firefox attract a new audience to its web tools and services. Firefox was once a top web browser and household name, but its market share declined over the years as the built-in options from larger tech companies took hold — like IE, Safari and Chrome. However, with people’s increasing suspicion of big tech, as well as far-too-frequent data breaches, and the overall decline in online privacy, it’s the best time for Firefox to try to stage a comeback. Whether it will actually be able to deliver is another matter.

Firefox Send is launching today on the web at send.firefox.com and will be available as an Android app in beta later this week.