Russia has told internet providers to enforce a block against encrypted email provider ProtonMail, the company’s chief has confirmed.

In all, 26 internet addresses were blocked by the order, including several servers used to scramble the final connection for users of Tor, an anonymity network popular for circumventing censorship. Internet providers were told to implement the block “immediately,” using a technique known as BGP blackholing, a way that tells internet routers to simply throw away internet traffic rather than routing it to its destination.

But the company says while the site still loads, users cannot send or receive email.

“ProtonMail is not blocked in the normal way, it’s actually a bit more subtle,” said Yen. “They are blocking access to ProtonMail mail servers. So Mail.ru — and most other Russian mail servers — for example, is no longer able to deliver email to ProtonMail, but a Russian user has no problem getting to their inbox,” he said.

That’s because the two ProtonMail servers listed by the order are its back-end mail delivery servers, rather than the front-end website that runs on a different system. 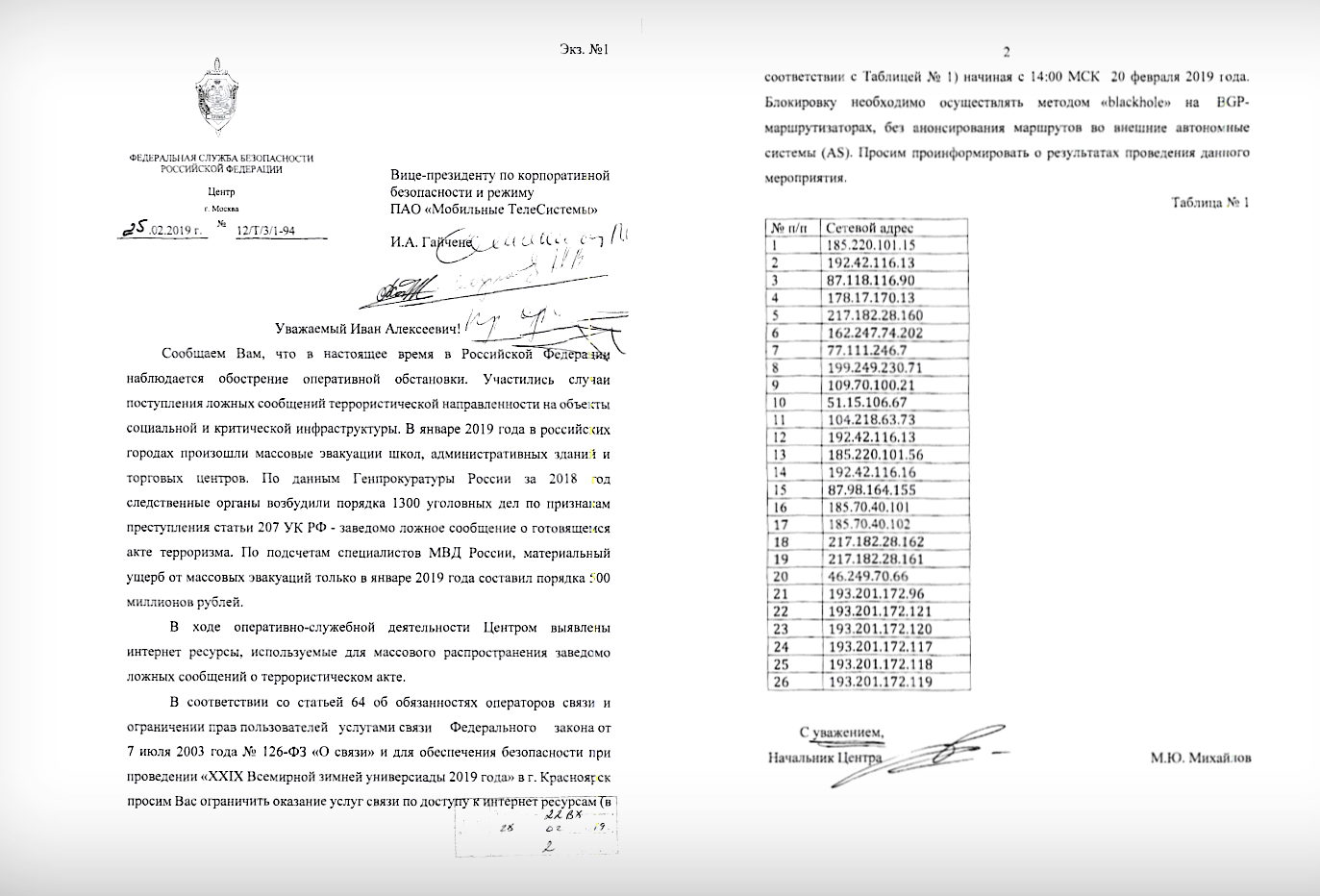 The letter, translated, says that the listed internet addresses caused “the mass distribution of obviously false reports of a terrorist act” in January, resulting in “mass evacuations of schools, administrative buildings and shopping centers.” (Image: supplied)

“The wholesale blocking of ProtonMail in a way that hurts all Russian citizens who want greater online security seems like a poor approach,” said Yen. He said his service offers superior security and encryption to other mail-providing rivals in the country.

“We have also implemented technical measures to ensure continued service for our users in Russia and we have been making good progress in this regard,” he explained. “If there is indeed a legitimate legal complaint, we encourage the Russian government to reconsider their position and solve problems by following established international law and legal procedures.”

Russia’s internet regulator Roskomnadzor did not return a request for comment.

Yen says the block coincided with protests against government efforts to restrict the internet, which critics have dubbed an internet “kill switch.” The Kremlin, known for its protracted efforts to crack down and stifle freedom of speech, claimed it was to protect the country’s infrastructure in the event of a cyberattack.

Some 15,000 residents protested in Moscow on Sunday, during which users started noticing problems with ProtonMail.

It’s the latest in ongoing tensions with tech companies in the wake of the Russian-backed disinformation efforts. Russia’s crackdown on the internet intensified in 2014 when it ratified a law ordering tech companies operating in the country to store Russian data within its borders. LinkedIn was one of the fist casualties of the law, leading to the site’s nationwide ban in 2016.

Last month, Facebook was told to comply with the law or face its own ban. Twitter, too, also faces a possible blackout.