Y Combinator revealed yesterday that its president, Sam Altman, is stepping down from his role to become the accelerator program’s chairman. This change, said YC, will allow Altman to “spend more time focusing on OpenAI,” the San Francisco-based nonprofit that was cofounded by Altman and Elon Musk three years ago to get ahead of the risks posed by artificial intelligence.

The timing may not be entirely coincidental. Two weeks ago, Musk explained that he hasn’t been “closely involved” for more than a year with OpenAI, whose operations Musk and Altman have funded, along with Reid Hoffman, Peter Thiel, YC cofounder Jessica Livingston, and Stripe’s former CTO Greg Brockman, who is today the CTO of OpenAI. Musk cited disagreements about the company’s development as reason to “part ways on good terms.” We now know that Altman actually intends to become CEO of the organization.

Either way, Altman’s newest move begs a question that industry watchers are likely to be asking for some time, and that is whether Altman – – who was part of the first YC startup class in 2005, began working part-time as a YC partner in 2011, and was made the head of the organization five years ago — made YC better or worse during his tenure at the top.

Certainly, it is much changed. When Altman was handed the reins, YC had just graduated 67 startups, all of them from the U.S. It was a record number at the time, but Altman has since more than tripled the number of startups that YC will process in one batch, with YC set to present 205 startups to investors over two days across two stages in San Francisco two weeks from now.

Those numbers merely hint at Altman’s ambition. In the past two years, YC has launched Startup School, a free 10-week online program; the Series A program, which coaches seed-stage alums on how to nab follow-on funding; the YC Growth program, a 10-week dinner series that it characterizes as a kind of grad school program; Work at a Startup, a platform that connects engineers with YC companies; and YC China, a standalone program that will be run out of Beijing once it gets up and going.

Even with a network that has 4,000 alumni and 1,900 companies, Altman has long said that he thinks YC can do even more. “Part of our model is to make the cost of mistakes really low, and then make a lot of mistakes,” he said at TechCrunch Disrupt in 2017. “We’ll fund a lot of people doing a lot of things that sound really dumb, and most of the time they will be. And some of the time, it will seem like a bad idea and be jaw-droppingly brilliant. The very best startup ideas are at the intersection of the Venn diagram of, ‘sounds like a bad idea,’ ‘is in fact a good idea.'”

Some worry that Altman may have taken YC to unsustainable extremes, encouraging too many people with wobbly ideas to forsake safer, more conventional options for a chance to become the next Brian Chesky, and encouraging them, specifically, to come to the Bay Area for its accelerator program, despite overcrowding and soaring costs.

Others wonder if startups might eventually revolt against YC’s terms, which see it investing $150,000 in exchange for 7 percent of each company — a stake that it can maintain throughout the company’s life it it so chooses, per its pact with its founders.

While the halo effect of YC is real, giving away so big a piece of one’s company for so little funding vexes some founders later. 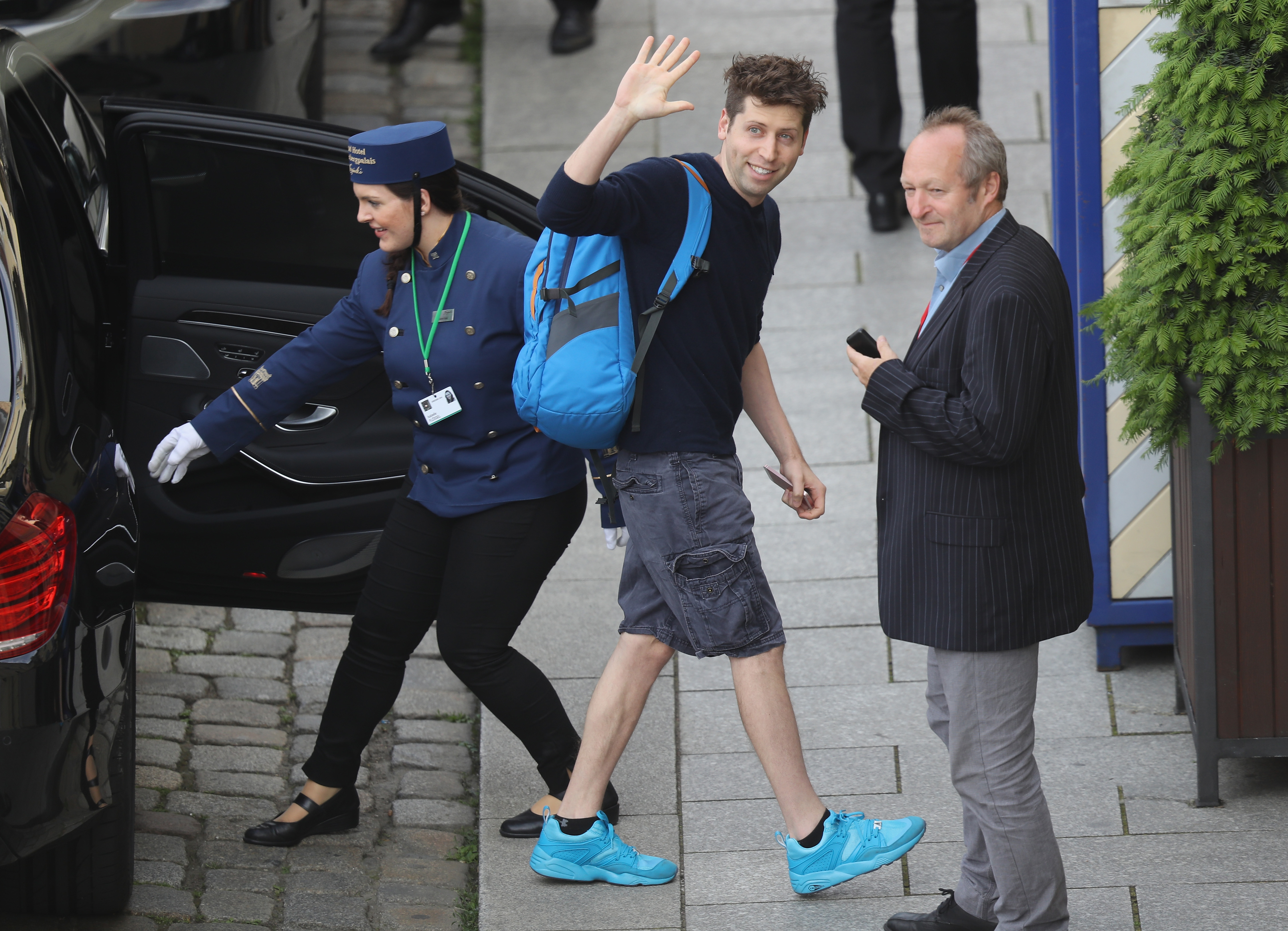 DRESDEN, GERMANY – JUNE 09: Sam Altman, President of Y Combinator, arrives at the Hotel Taschenbergpalais Kempinski Dresden for the 2016 Bilderberg Group conference on June 9, 2016 in Dresden, Germany. The Taschenbergpalais is hosting the 2016 Bilderberg Group gathering that will bring together 130 leading international players from politics, industry, finance, academia and media to discuss globally-relevant issues from today until June 12. A wide spectrum of groups have announced protests to be held nearby. Critics charge the secretive nature of the Bilderberg Group annual meetings is undemocratic. (Photo by Sean Gallup/Getty Images)

VCs — many of whom have a love-hate relationship with the powerful accelerator  — have also whispered at times about possible conflicts of interest owing to Hydrazine Capital, a venture fund that Altman formed before being appointed as head of YC, with “significant investment” from Peter Thiel, as described in a 2017 New Yorker article about Altman.

Still, even people who might be tempted to take Altman down a notch say he has done a phenomenal job of running Y Combinator, including by turning the outfit into a global brand, creating a constant stream of new products, and by overseeing the development of infrastructure and software that has allowed the company to continue to scale for the foreseeable future.

Altman also diversified the types of founders that YC admits (though it could do better); 15 percent of the founders to pass through the accelerator last summer were women. And whereas the program was once dominated by consumer startups, it now graduates business-to-business software and services startups, healthcare startups, blockchain startups, real estate, govtech and fintech startups, among others.

Equally important, Altman — a masterful networker who isn’t known for being a terribly warm boss — ensured that everyone at the partner level at Y Combinator enjoys the same economics. It’s a surprisingly rare structure in venture capital, where it’s more often the case that a small group of investors is accruing most of the financial rewards based on how long they’ve been involved with an outfit or their specific contributions.

Indeed, Altman’s obvious drive will make it all the more interesting to see what he does with OpenAI, which just two weeks ago said it had developed an AI system that can create fake news so authentic looking that it decided not to release the full research to the public so it can better weigh its ramifications.

In the meantime, one guesses that YC, where Altman has not been involved operationally for some time, will be fine without him at the helm, including thanks to the continued involvement of Altman and YC founders Livingston and Paul Graham at the board level. More crucially, YC has Michael Seibel, its CEO, who has led the core YC program for the last four-and-a-half years. (Others of its numerous partners have also been with the firm for years.)

As one VC told us yesterday, even with a YC that looks very different than it did five years ago — or perhaps because of it — investors would be “idiots not to pay attention” to the founders it backs. Many of even the most nascent YC startups have begun raising funding at valuations that make it too expensive for angels or some seed-stage firms to participate — and that these founders may later regret when the market downturn inevitably comes.

But for Series A and later-stage investors, there’s still no better avenue to reaching up-and-coming founders. When it comes to curating talent, says this investor, YC “is just too good.”

Update: This post originally reported that Musk had more recently parted ways with OpenAI. Apologies for the mix-up.