Red Cat, a startup that wants to store drone flight data on the blockchain to guarantee immutability, announced the second beta of its drone data platform today.

Jeff Thompson, CEO of Red Cat, says in 2017 he was looking at what was holding back the commercial drone business and the need for a black-box kind of system became apparent to him. The so-called black box is really a flight recorder that tracks data about a flight. He believed he could create a platform to reproduce this capability for drones and store it on the blockchain to take advantage of the immutability of blockchain data.

“People want to be able to have some accountability and trackability to be able to start utilizing our information, whether it’s regulators or insurance companies, guys that have to write checks if you do a lot of damage,” Thompson told TechCrunch.

This tool could help these interested parties should there be an investigation into a crash, a near-miss with a plane or an incident like the drone that shut down Gatwick Airport in London last year. They can check the record in Red Cat and be assured that the data they are viewing is accurate and hasn’t been tampered with in any way. 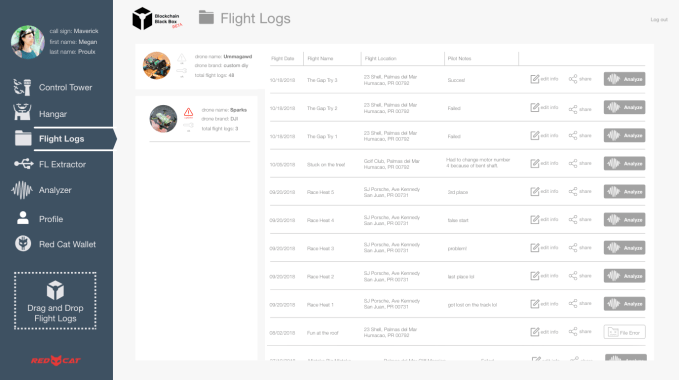 Thompson believes having a system like this in place is absolutely essential if the industry is going to mature and be able to share airspace with other types of commercial air traffic. The company wants to do more than create the data tracking system, however. It wants to give drone companies detailed insight into exactly what’s happening with their drones as they travel to different destinations.

The goal is to help companies control and monitor their drone traffic and better understand how they are being utilized. The company is still refining all of this. This is actually the second beta, with 200 people actively using it in the first round. The purpose of this new beta is to elicit additional feedback from the drone community, including companies, pilots, regulators and insurance companies that could benefit from having access to data stored in Red Cat.

The company is based in Puerto Rico and has raised $2.2 million to date.