Wefox Group, the Berlin-based insurtech startup behind the consumer-facing insurance app and carrier One and the insurance platform Wefox, has raised $125 million in Series B funding. Notably, the round is led by Abu Dhabi government-owned Mubadala Ventures (which is also an LP in SoftBank’s Vision Fund) and is the first investment from Mubadala’s newly created European Investment Fund. Chinese investor Creditease also participated.

The investment, which Wefox Group says is the first tranche in the Series B round, will be used for expansion into the European broker market. The German company will also grow its product and engineering teams, specifically in relation to applying “advanced data analytics” to realise Wefox’s vision for an all-in-one insurance platform that places personalisation at the heart of how various insurance coverage is sold and delivered.

In a call with Wefox Group co-founder and CEO Julian Teicke, he disclosed that Wefox has grown its revenues to around $40 million since being founded in 2014. The company now serves more than 1,500 brokers and more than 400,000 customers, making it “Europe’s number one insurtech platform.”

As it exists today, Wefox Group consists of two main products and subsidiaries: Wefox, and One.

Wefox is a platform that connects insurance providers, brokers and customers in an attempt to drag the insurance industry into the digital age. Rather than bypass human brokers entirely, Wefox lets independent brokers on-board their existing customers onto the platform to help deliver a better experience and more easily manage their clients’ coverage.

Efficiencies are achieved through a degree of automation, helping a broker scale the admin side of their business while also ensuring customers get the most appropriate coverage. From a consumer’s perspective, the Wefox app and website also acts as a “digital” wallet, where they can store details of the various insurance coverage to which they have subscribed.

Teicke says that about 80 percent of customers on the Wefox platform come via brokers. The remaining 20 percent sees customers sign-up direct. In this scenario, Wefox effectively acts as a lead generation or matching service for local brokers. 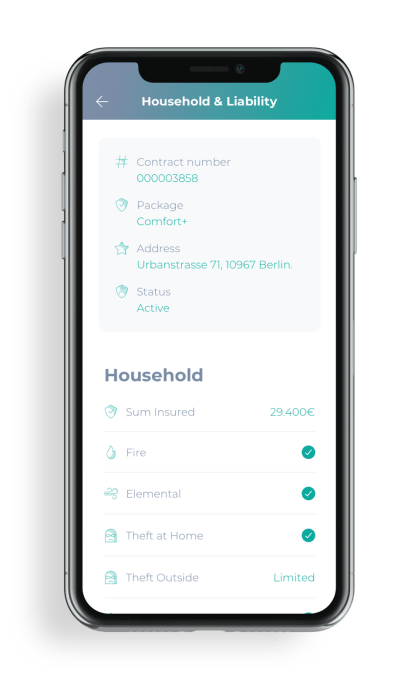 One is a direct-to-consumer fully digital insurance provider, offering various personal insurance coverage — and is only one of multiple insurance providers that reside on the Wefox platform and can be recommended by brokers. Teicke says it is also modular in design, letting customers select areas of coverage and essentially plugging in additional coverage based on their needs and appetite for risk at any given time. This includes pioneering the use of IoT and other data, customer permitting, to make insurance coverage proactive rather than reactive.

“The modular, timestamp and IoT triggered product design will be the role model for all insurance incumbents,” says Teicke. Related to this, Wefox Group plans to make the underlying technology of One available to other insurance providers so they too can plug proactive insurance provision into the Wefox platform, based on specific cohorts, scenarios and specialist coverage.

Ultimately, the grand vision and big bet — and no doubt what attracted such large amounts of capital into this Series B round — is that insurance will transition to a platform play, fueled by responsibly harnessing various types of data. The will see a platform exist to deliver the right coverage at the right time from a multitude of providers rather than the outdated and disparate model that exists today.

“Our hypothesis is that insurance will be massively impacted by the IoT data revolution,” says Teicke. “Insurers will have access to an exponentially grown number of real-time variables in order to price insurance products in real time. This trend will change insurance from a pure financial service to a service that offers proactive advice to reduce risk and consists of a financial service component only as an add-on to the core business model.”

Meanwhile, the new round of funding draws a line under a particularly tough period for Wefox Group after it was threatened with a lawsuit by New York-based insurance platform Lemonade. The complaint, filed in the U.S. District Court Southern District of NY, alleged that Wefox reverse-engineered Lemonade to create One, and infringed Lemonade’s intellectual property. Ultimately, however, the dispute panned out to be a “much ado about nothing,” with Lemonade quietly dropping the lawsuit a few months later.