Volkswagen has added another member to its ever-expanding I.D. line of concept electric vehicles that’s meant to showcase the automaker’s electric future. This time it’s the I.D. Buggy, an all-electric dune buggy with some 1960s California subculture flair.

The I.D. Buggy, which made its global debut Monday at the 89th Geneva International Motor Show, is meant to show the versatility of the automaker’s modular electric drive toolkit chassis, or MEB. The MEB, which was introduced in 2016, is a flexible modular system — really a matrix of common parts — for producing electric vehicles that VW says make it more efficient and cost-effective.

For instance, the two-seater buggy can be converted to a 2+2-seater and an additional electric motor can be added to the front axle in order to make four-wheel drive possible, the company said. The modular design allows for the composite upper body to be detached from the MEB chassis, which VW argues will open up a “world of possibilities for third-party manufacturers, as the original Meyers Manx kit did for the first buggies.” The Meyers Manx kit was the creation of California engineer, boat builder and surfer Bruce Meyers who modified the original Volkswagen Beetle to make it suitable for desert racing.

The I.D. Buggy is equipped with a a 62kWh lithium-ion battery and a 201-horsepower electric motor in the rear to give it an expected range of 155 miles on the WLTP cycle, the company said. There are no doors or a roof in the two-seater, which VW says gives drivers the “purest experience of classic beach cruising.”

The vehicle has three-dimensional oval LED headlights and taillights and an LED VW logo. The automaker also touts the buggy’s body that seems to “float above the chassis,” an effect achieved by how its painted. 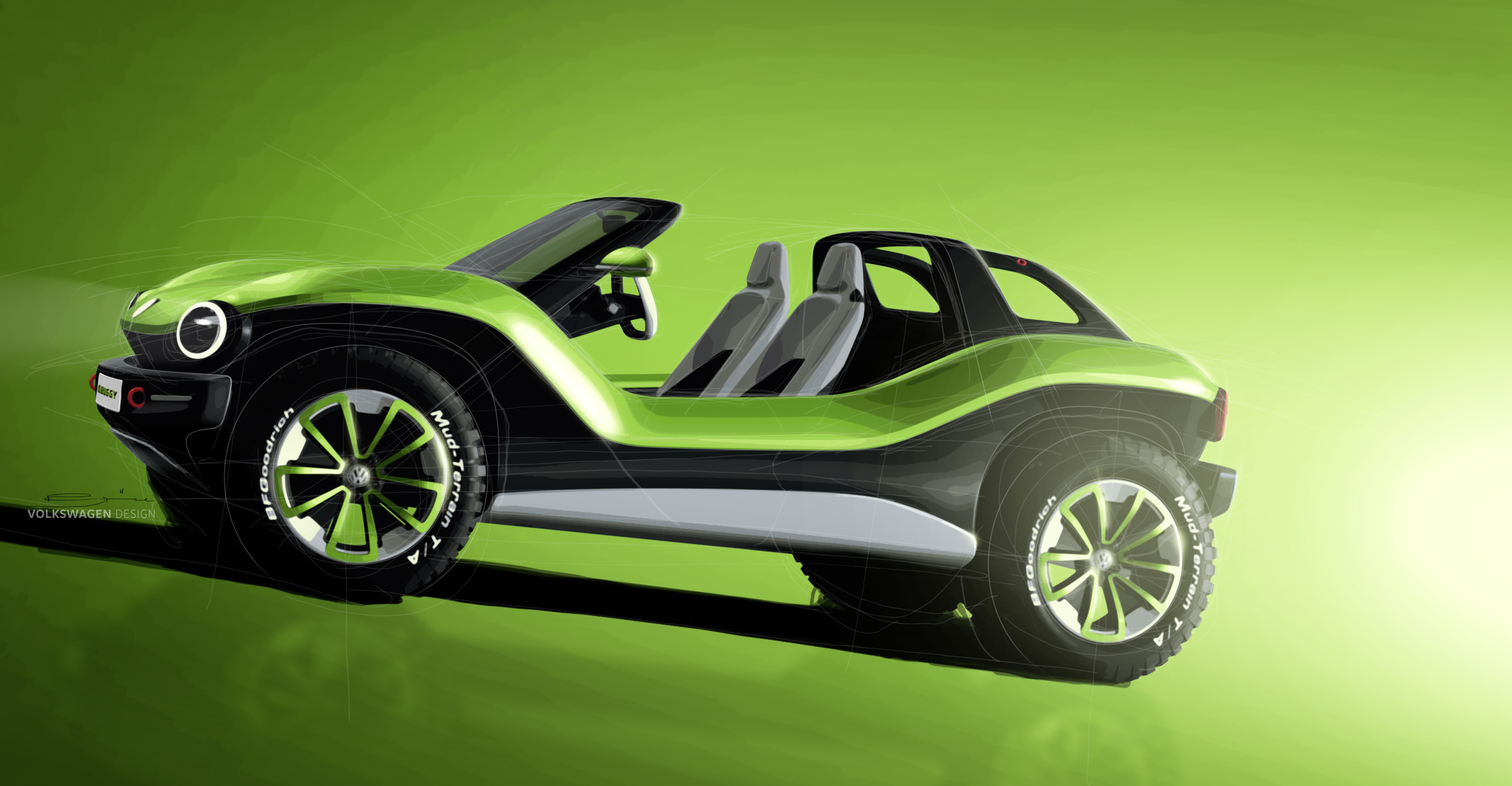 Volkswagen has been showing off its I.D. line of concept electric vehicles for several years now.  And some of them are even going into production. There is the electric all-wheel drive microbus called I.D. Buzz, a futuristic take on the family camper van that VW introduced as a concept in 2017, the I.D. Vizzion self-driving sedan concept, and of course, the I.D. Crozz SUV concept that was first shown at the North American International Auto Show  last year.

The I.D. Crozz and I.D. Buzz are going into production. It’s not clear if the I.D. Buggy will ever be anything more than concept.

Earlier this year, VW announced plans to spend $800 million to expand a U.S. factory in Chattanooga, Tenn., that will produce the automaker’s next generation of electric vehicles.

VW’s Chattanooga expansion is just a piece of the automaker’s broader plan to move away from diesel in the wake of the emissions cheating scandal that erupted in 2015. The company is also building a European facility in Zwickau, Germany, set to begin EV production in 2019 and adding EV-production at facilities in Anting and Foshan, in China, in 2020, and in the German cities of Emden and Hanover by 2022.

The Tennessee factory (along with the other new facilities) will produce EVs using Volkswagen’s MEB chassis. Volkswagen of America says it will offer the first EV based on the MEB platform to customers in 2020. Electric vehicle production at the Tennessee site will begin in 2022.