Facebook is taking legal action against a cluster of Chinese websites that sell fake accounts, likes and followers both on Facebook itself and on Instagram. The company announced the legal action in a short blog post late Friday afternoon (a move unusual enough to pique our curiosity a little). Of course, the fact that Facebook isn’t allowed in China might be a complexifier, in Bezos-speak.

The lawsuit, filed with the Northern District of California, alleges that starting in 2017 four Chinese companies and three individuals based in China “operated a series of websites promoting the sale of fake accounts (e.g. using fake names or other false identifiers) and inauthentic accounts (e.g. used for inauthentic activity),” infringing on Facebook and Instagram’s trademarks and terms of service in the process. 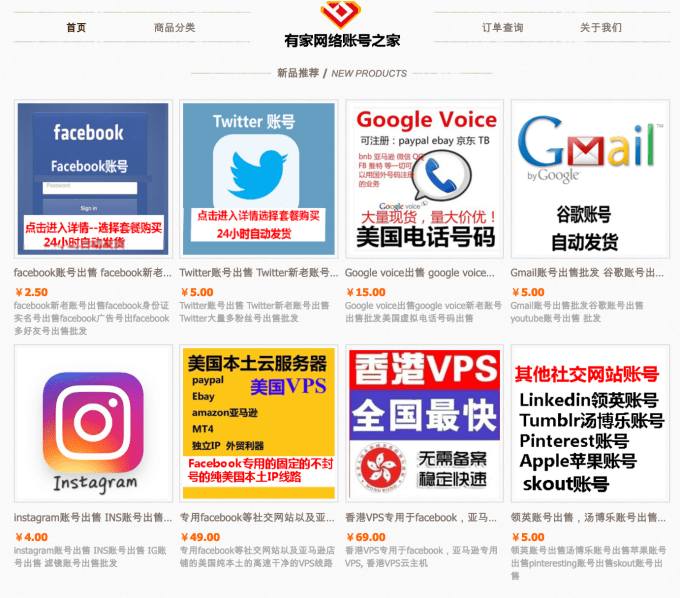 Trademark infringement is certainly nothing new for the biggest social network on the planet, so our guess is that the activity must have been on a fairly large scale to attract Facebook’s legal ire. The company is asking for $100,000 in damages each for six websites it lists in the complaint for trademark infringement, terms of service violations and cybersquatting domains using its name. At the time of writing, the domains in question mostly still appeared online and operational — another factor that may have contributed to Facebook’s choice to pursue legal action. Some of the websites also sell accounts for services from Google, Twitter other American tech companies.

As Facebook notes in the filing, “According to their websites, these Defendants… engage in the registration and sale of accounts, in bulk, for various social networking sites.” When we looked into one of the websites, 9xiufacebook.com, we found that most people discovered it through a Chinese web search for “Facebook account purchase.”

The court filing is embedded below.