Against a backdrop of public backlash and looming federal regulations, the world’s biggest e-cigarette manufacturer has released video of the original thesis presentation that launched Juul, with the hopes of making the case that its purpose is to do no harm — or at least less harm.

The founders of Juul have told their story before — the two met and became friends over smoke breaks at Stanford University, and eventually decided to design an alternative product to cigarettes. Juul today released a video of that thesis, presented by James Monsees (MFA in Product Design) and Adam Bowen (MSME in Product Design).

Bowen and Monsees say they started with the principle of harm reduction, aiming to keep the “good” and eliminate the “bad” from cigarettes. The people they spoke to said they were attracted to the ritual of smoking, and the satisfaction of basic human cravings like an oral fixation. However, smokers were tired of smelling like a cigarette and complained that, even if they weren’t being judged, they felt judged. Of course, hanging over all of this like a storm cloud is the fact that smoking is inherently bad for your health.

Monsees says in his presentation:

Back in 2004, when the presentation was given, Monsees and Bowen identified one of the strongest pillars of Juul’s value proposition as a cigarette replacement.

Professor at NYU’s College of Global Public Health David Abrams, who has advised Juul but not been compensated by them, told The New Yorker that the stigma of cigarettes has followed e-cigarettes.

“Cigarettes were a wolf in sheep’s clothing,” he said. “Now, with vaping, we have a sheep in wolf’s clothing, and we cannot get the wolf out of our minds.”

Part of the reason we can’t get the wolf out of our minds is the fact that minors have taken up e-cigarettes, and Juul in particular, in staggering numbers. For young people, nicotine and nicotine addiction have a far more egregious affect on health than they would for an adult former smoker. To teenagers, nicotine is indeed a wolf.

And it’s this issue that poses the greatest existential threat to Juul Labs. The FDA has asked for Juul and other e-cig companies to create and enforce new policies that will stymie use of these products by minors, but thus far Commissioner Gottlieb doesn’t seem too impressed.

In the presentation from 2004, Bowen presents a slide that shows the future company’s predicted demographic. On a scale from social smokers to pack-a-day smokers, Monsees and Bowen estimated that it would pick up users across the spectrum, with the majority of adoption coming from social/light smokers. 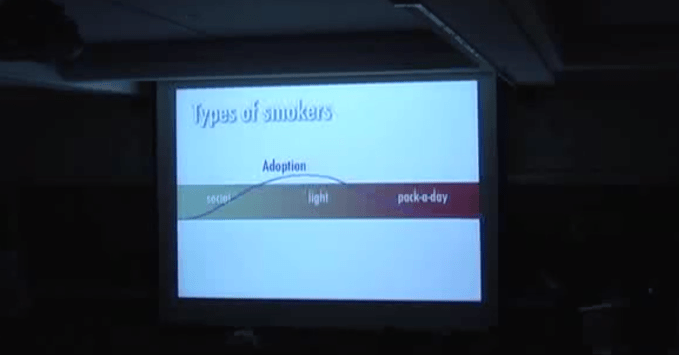 Ten years later, however, when the thesis project had evolved into Ploom which then evolved into the Juul we know today, the company made a marketing decision that surely still haunts them. The early marketing campaign for the device showed young, hip models using the device. To this day, the campaign is cited by critics of the company for starting the youth craze over the device, which the FDA calls an epidemic.

Juul Labs has taken action to reverse this trend, including a $30 million investment in youth prevention, removal of non-tobacco-flavored nicotine pods from retail stores, deleting its social media, enforcing stricter age verification for online sales, an offensive legal push against counterfeiters and copycats and a new $10 million ad campaign focused on attracting smokers to “make the switch” to Juul.

“It [underage use] is an issue we desperately want to resolve,” chief product officer and co-founder James Monsees said in August. “It doesn’t do us any favors. Any underage consumers using this product are absolutely a negative for our business. We don’t want them. We will never market to them. We never have. And they are stealing life years from adult cigarette consumers at this moment, and that’s a shame.”

Whether Juul’s efforts will be enough to prevent further regulation remains to be seen.

But from an entrepreneurial perspective, it’s interesting to see the earliest seed of a company that has now become a behemoth in its respective industry. In fact, Juul has grown to the point where Altria, makers of Marlboro cigarettes, have invested $12.8 billion in the company.

It’s also fascinating to watch the rhetoric around Juul evolve based on the state of regulation. In early conversations with Juul, back when it was called Ploom, the team was highly sensitive to the concept that the device was a smoking cessation product, lest it be regulated as such. With regulation now inevitable, cessation has become the top focus of the company.

Studies show that 40 to 55 percent of adult smokers who used Juul switch fully from combustible cigarettes within 90 days.

Alongside the thesis video, Juul also released a video of present-day Monsees and Bowen recalling the product design process for Juul.

“We started this project with the firm belief that innovation could address all the problems associated with smoking,” said Bowen in the video. “I would tell people, anyone who would listen, ’50 years from now no one will smoke cigarettes, they’re going to look back and think Oh my God, I can’t believe people used to do that.’ And now I think that’s actually going to happen much faster. In large part because of the progress that we’ve made.”