This year’s MWC has been very much the beginning of a new phase for Light. Until now, the Palo Alto startup has been best known for its 16-lens DSLR competitor, an utterly fascinating, if not particularly practical device.

At this week’s show, however, we’re seeing a wholly different side of the company, one focused on partnerships. The event has seen the company announce three big alliances — Nokia device maker HMD, Chinese handset company Xiaomi and Sony, whose component manufacturing division will be teaming with Light to develop advanced modules for its near-near-ubiquitous camera hardware.

It’s a promising new start for the five-year-old company, and one that could help Light become a major player for mobile cameras going forward. In an interview, CEO Dave Grannan told TechCrunch that the trio of deals are just the beginning, with more partnerships planned for a 2019 announcement.

The Nokia 9 is the first product of these deals. Announced at the show this week, the five-camera limited-edition flagship is the product of a module that appeared last year, utilizing the array to create complex composite image similar to the sorts of RAW shots one takes with an SLR. It’s one of a number of different arrays that can utilize Light’s technology to build a better mobile multi-camera system. 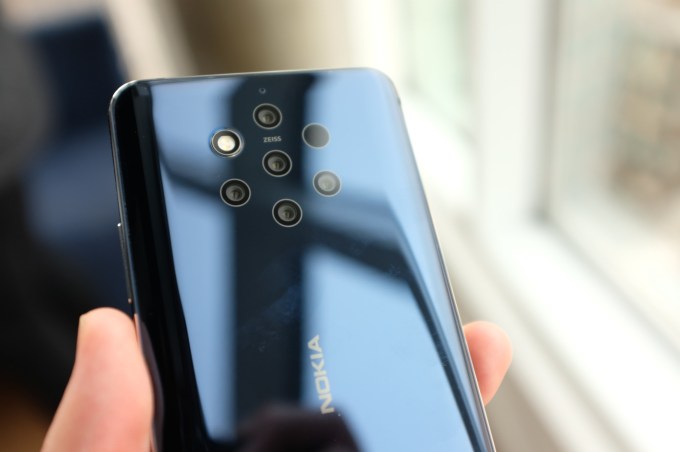 “When we started Light five years ago, it wasn’t obvious that we would build a dedicated camera to begin with,” Grannan tells TechCrunch. “We realized that we really needed to build a reference device. Something to show the world what could be done. The idea from the first days was to prove to the world that it could be done and then start licensing our technology into other verticals starting with mobile phones.”

The proof-of-concept 16-camera system was always meant to be a limited-edition product, according to the executive, and it ultimately sold out of its initial run. That number was in the tens of thousands, according to Grannan, though he won’t go into any more detail beyond that.

He was happy to discuss the startup’s future, however. In July, Light raised a whopping $121 million, led by SoftBank, bringing its total funding up to $181 million. It was the CEO Masayoshi Son who suggested the next step in the company’s evolution, moving to autonomous vehicles. While Light would be a new entrant in a field that already involves dozens of focused startups, Grannan believes it can offer imaging systems at a fraction of the cost of current LIDAR rigs — at around $5,000 apiece.

Light also plans to expand into security cameras, helping systems better process the information they collect. For now, however, it’s focused on mobile. And in spite of a push toward a more software-focused approached to mobile camera improvement, Grannan believes that phone camera arrays will continue to expand — though perhaps not quite to the 16-camera level Light implemented on its own devices. Currently the company is working on a nine-camera module.

“Within a couple of years, three cameras will seem quaint,” Grannan says. “People are going to need this approach because it’s never good enough with imaging.”