The Federal Trade Commission announced on Tuesday evening that it has brought its first case against using fake reviews to sell products online. The Commission said it will settle with defendant Cure Encapsulations Inc., a New York City-based company, and owner Naftula Jacobwitz, who it accused of making false claims about a weight loss supplement and paying a third-party website to post fake reviews on Amazon.

Fake reviews are a constant nuisance for Amazon shoppers, despite algorithms designed to safeguard its review system, and the company has hit back with a series of lawsuits against websites that offer to post fake verified reviews.

According to the FTC’s complaint, Cure Encapsulations sold pills with garcinia cambogia, a tropical fruit also called brindleberry that is sometimes used as a “natural” weight loss aid. Called Quality Encapsulations Garcinia Cambogia, the pills were sold only on Amazon. Jacobwitz paid a website called www.amazonverifiedreviews.com to post favorable reviews in order to boost its rating (Chris Embry, operator of Amazonverifiedreviews.com, was one of the defendants named in a lawsuit filed by Amazon in 2016). 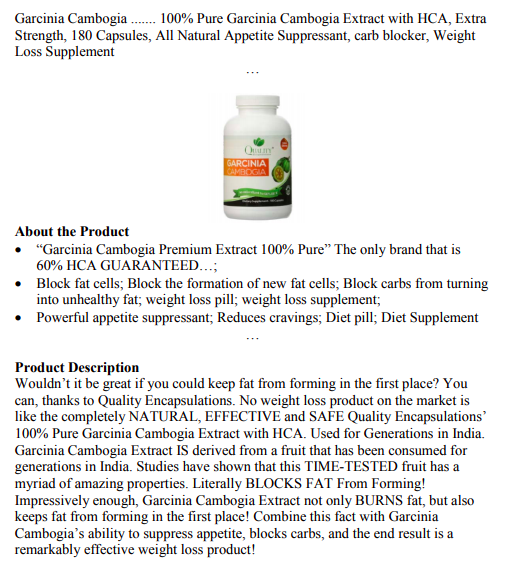 An exhibit from the FTC’s complaint against Cure Encapsulations Inc.

On October 8, 2014, Jacobwitz sent an email to the site’s operator saying he’d pay a total of $1,000 for 30 reviews, three per day, with the goal of increasing its 4.2 rating to 4.3, which he claimed was necessary in order to have sales. He also wrote that he wanted the product to “stay a five star.”

Www.amazonverifiedreviews.com then posted a series of fake five-star reviews praising the pills. The FTC said the reviews made false claims, including that the pills were a powerful appetite suppressant, caused weight loss of up to 20 pounds and blocked the formation of new fat cells.

The proposed settlement includes a judgement of $12.8 million, to be suspended upon payment of $50,000 to the FTC and certain unpaid income tax obligations. The settlement also bans Cure Encapsulations and Jacobwitz from making weight-loss, fat-blocking or disease-treatment claims for dietary supplements, food or drugs, unless they have reliable scientific evidence from clinical trials in humans. They are also prohibited from making misrepresentations about endorsements, including fake reviews, and must tell Amazon which reviews were faked and email customers who have bought the pills to give them information about FTC’s allegations.

In a press release, Andrew Smith, director of the FTC’s Bureau of Consumer Protection, said, “When a company buys fake reviews to inflate its Amazon ratings, it hurts both shoppers and companies that play by the rules.”

In a media statement, a Amazon spokesperson said, “We welcome the FTC’s work in this area. Amazon invests significant resources to protect the integrity of reviews in our store because we know customers value the insights and experiences shared by fellow shoppers. Even one inauthentic review is one too many. We have clear participation guidelines for both reviewers and selling partners and we suspend, ban, and take legal action on those who violate our policies.”