This follows the announcement last fall of what the company calls In-Stream Reserve advertising — video ads with a curated list of hundreds of publishers, at a set price, with Nielsen-verified audiences. In fact, Facebook said at a press event today that In-Stream Reserve ads are reaching nearly 100 million U.S. viewers each month.

“That’s TV-like scale,” said Head of U.S. Agency Sales Erik Geisler (pictured above). He added that Facebook offers an effective way to reach the younger audiences that are moving away from linear TV, since 43 percent of In-Stream Reserve viewers are between the ages of 18 and 34.

How does Showcase change things? It combines this video advertising with the ability to run ads on a specific content category (including sports, fashion/beauty and the new additions of food and news), and to exclusively sponsor individual shows. And now advertisers can buy those ads for the 2019-2020 broadcast year.

“It takes In-Stream Reserve from a quarter-by-quarter opportunity [to something] more in line with the upfronts,” Geisler said. 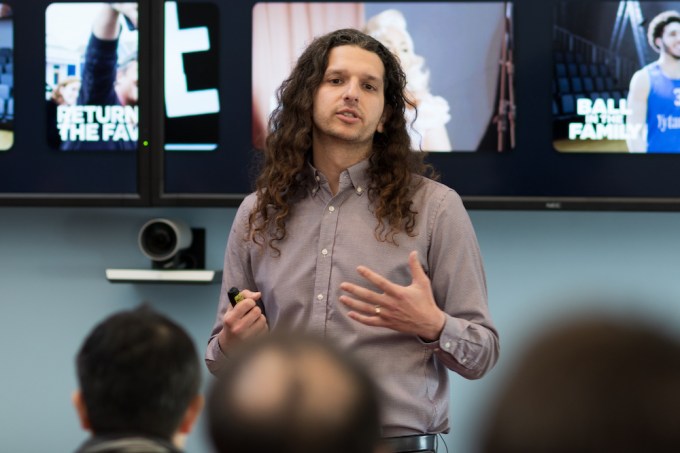 Facebook’s video destination Watch doesn’t exactly seem like a runaway success. In fact, Digiday just reported that Facebook won’t be renewing two-thirds of the news shows that it commissioned for Watch. However, Matthew Henick, who leads Facebook’s content and planning strategy, said he actually expects news content on Facebook to grow.

“We’re not cutting two-thirds of what our final output would be, we’re reexamining previous commitments,” he said.

Henick said that there are “three main pillars” to Facebook’s video strategy: community, interactivity and the ability to “co-watch” a show with others.

He also announced a new animated comedy called “Human Discoveries,” which will star Zac Efron and Anna Kendrick and premiere sometime this year, while also revealing more details about Facebook’s upcoming revival of “The Real World” — apparently it will also be streaming old seasons of the show, as voted on by Facebook users.

And while Watch is at the center of Facebook’s premium video strategy, it’s worth noting that Showcase ads aren’t limited to Watch; they can be viewed across Watch, the News Feed and Facebook Pages.

Facebook Watch is finally growing as payouts get spread thin