As subscriptions continue to grow into a sizable revenue stream for mobile app developers, Apple has had to make adjustments to its guidelines, rules and even its tools for subscription management in recent weeks. It issued stricter guidelines around how subscriptions are to be presented to consumers, and it made the setting for canceling existing subscriptions more accessible. Now, Apple is rolling out new tools for developers that will help them retain their current customers and win back lapsed subscribers.

But these offers could only be made to first-time customers. The new promotional offers will allow developers to cut similar deals for existing subscribers or to win back the business from those who used to pay for the subscription but had canceled.

While the new promotional offers allow for the same sort of discounts as introductory offers, they’re more flexible in terms of how they’re used. 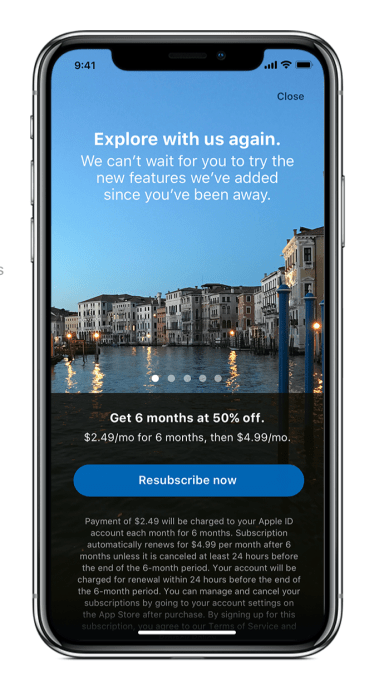 And developers are in control of when an offer displays to a customer, in which territories and how many offers a customer can redeem.

In addition, while introductory offers may display in the App Store when promoted, the promotional offers will not. That means developers can use business logic that targets winning back their most valuable customers with offers that may be better from those shown to others — and no one would be the wiser. It also means developers can offer different deals to lapsed customers — like maybe a discounted subscription — compared with promos meant to retain current subscribers.

As an end-user looking to save money, these changes mean it may be worth toggling off your subscriptions from time to time to see if you’re offered a better deal to resubscribe.

Developers were alerted to the new features last week, but the offers themselves aren’t yet publicly available.

To create the offers, developers have to download the latest Xcode 10.2 beta and will need to implement the new StoreKit APIs. They can then test their offers on the latest beta version of iOS 12.2, macOS 10.14.4 and tvOS 12.2. Apple said the offers will be made available to the public “soon.”