An Atlas cargo plane flying on behalf of Amazon Air — Amazon’s own freight delivery service that competes with FedEx and UPS, among others — has crashed outside Houston, Texas, killing three people on board.

Amazon and Atlas both confirmed the accident with short statements. Neither provided any details on the nature of the accident.

“Our thoughts and prayers are with the flight crew, their families and friends along with the entire team at Atlas Air during this terrible tragedy. We appreciate the first responders who worked urgently to provide support,” said Dave Clark, SVP of worldwide operations at Amazon.

“This is to confirm that an Atlas Air 767 cargo aircraft Flight No. 3591 operating from Miami to Houston has been involved in an accident this afternoon,” reads a statement from Atlas. “We understand the aircraft went down near the city of Anahuac, Texas, in the Trinity Bay. We can confirm there were three people on board the aircraft. Those people and their family members are our top priority at this time. Atlas Air is cooperating fully with the FAA and NTSB. We will update as additional information becomes available.”

The Boeing 767 cargo jetliner lost contact on radio and radar around 12:45pm local time after crashing into Trinity Bay close to Anahuac, a small city about 30 miles from Houston. Local news reported officials on the ground saying there is unlikely to be survivors.

The aircraft, Atlas Air Flight 3591, was flying from Miami on behalf of Amazon, according to flight tracking site Flightradar24.

Many are reporting the crash as a “Prime Air” incident, but this isn’t completely accurate. Originally, Amazon Air was branded “Prime Air”, and this appears to be the logo that still runs on many of these planes — but Amazon rebranded the service in December 2017. Amazon Prime Air now refers to the company’s efforts to build a drone delivery network.

As we have noted, it is not yet clear what caused the crash. The Federal Aviation Administration confirmed the accident in a statement, deferring the investigation to the National Transportation Safety Board, which said in a tweet that it has dispatched investigators to the crash site. 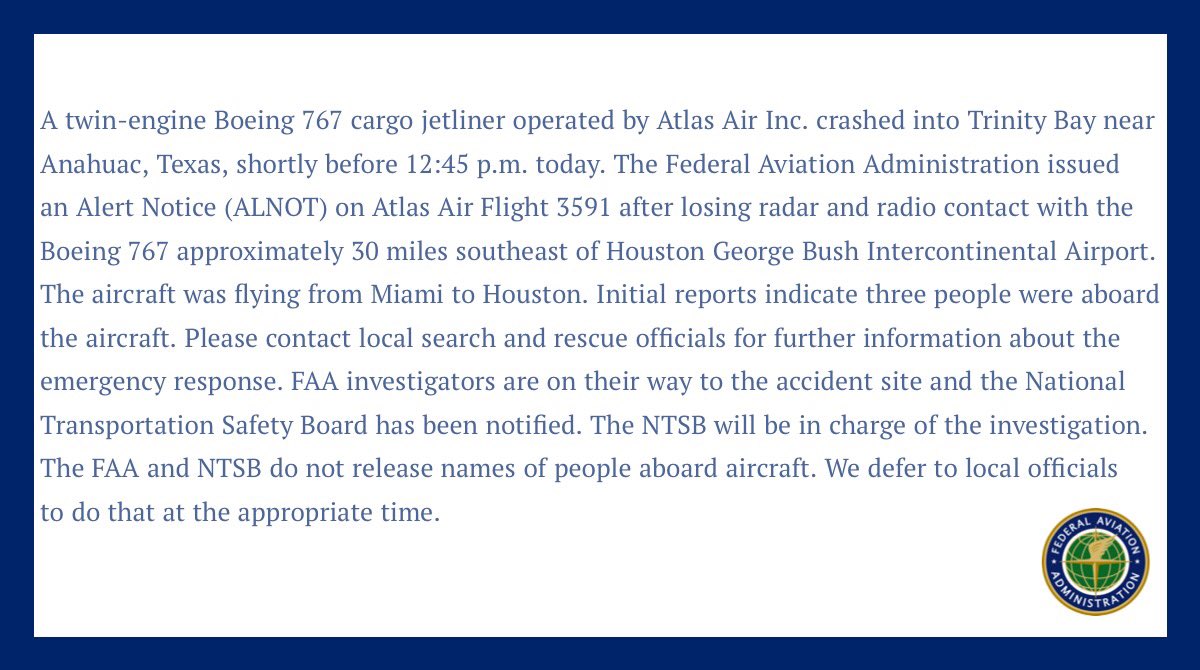 Counting today’s plane, Amazon has 40 aircraft operating under the Amazon Air brand, serving some 23 airports in the U.S.

One looming question is how and if today’s incident will impact Amazon’s bigger strategy with freight delivery.

The company has been building its own network of cargo planes since 2015, a strategy that serves a couple of purposes. It gives Amazon more control (both in terms of scheduling and costs) over air-based logistics for the transport of goods that it sells; and it gives Amazon a shot at taking on some of the air shipping business that FedEx and UPS provide for other companies.

Amazon Air has quietly but steadily grown over the years. Amazon currently has plans to add another 10 aircraft during 2019 and 2020, leasing them from Air Transport Services Group, an Atlas competitor. Notably, Amazon has stakes in both Atlas and ATSG as part of this bigger bet on taking on other larger cargo carriers with its own freight delivery service.