Viber, the messaging app owned by Japanese e-commerce firm Rakuten, is poised to implement a controversial new strategy that will see it charge companies that run chatbots on its platform.

The conventional wisdom is to work with content companies to help bring users to messaging platforms and keep them engaged, but Viber, which has struggled to keep up with rivals like WhatsApp and Line, is turning that on its head.

Starting April 1, Viber will charge chatbot operators $4,500 per month for the ability to send up to 500,000 messages to users. Those that exceed that range will be eligible to send up to one million messages per month for $6,500. The new fees are being communicated to companies that operate Viber chatbots, but Viber hinted at its new monetization plans in an email to TechCrunch.

“Bots can be published for free; however, to ensure the highest discoverability and quality of content for bots, we will be introducing a commercial commitment in the coming months. A key aim with this move is to ensure that users are presented with a steady stream of highly relevant and relatable content and a commercial commitment is one key tool for ensuring a quality experience for users,” Debbi Dougherty, head of B2B Marketing & Communications for Viber, explained.

This is a risky strategy that is likely to alienate companies that operate chatbots on Viber, as well as brands that bought into a bot strategy.

These costs have come out of the blue, much to the surprise of startups that spent time developing chatbots for the Viber platform.

Balčikonis said his startup was attracted to the Viber platform because it provided all the necessary documentation and APIs to build a chatbot upfront and in public. Having spent eight months developing its Viber bot, Eddy Travels plans to double down on its efforts with Facebook Messenger and Telegram, where its bot-based service runs without charge and has seen multiples more users and engagement.

“Viber encouraged us to build the bot, but never discussed the price and there’s no price in the website documentation,” he said. “Messenger is showing way more traction for us… we didn’t get any significant engagement on Viber.”

Indeed, the strategy seems to be quite the opposite that Viber needs to take if it is to gain market share from the chat app leaders. WhatsApp — the world’s largest messaging service with more than 1.6 billion monthly active users — doesn’t currently support chatbots, but instead of playing to its strengths, Viber is trying to squeeze additional revenue here under the cloak of “a quality user experience.”

Times are already hard though at Viber. TechCrunch spoke to six chatbot startups that develop a range of services for customers, including banks, insurance companies and media, but we found that none run any projects on Viber. Each said their desire to work on the Viber platform would diminish further if they were forced to pay for the privilege.

The Viber service is popular in pockets of the world, including the Philippines, Myanmar and some Eastern European markets. Current CEO Djamel Agaoua, a seasoned advertising executive, promised to work on the revenue and business model when he took the helm in 2017. Under his leadership, Viber has pushed its communities chat feature for brands and tried to tap into e-commerce, but little is known of how that has progressed.

Rakuten’s recent 2018 financial report was released this month and it made scant reference to Viber, other than to note that the service and Rakuten Mobile, the company’s MVNO offering in Japan, had “substantially increased revenue thanks to their full-scale aggressive sales activities.”

No raw figures were provided but Rakuten’s “Internet Services” division, which houses Viber, and Rakuten Mobile, saw its annual revenue increase by 15.9 percent to 788.4 billion JPY. That’s around $7.1 billion, and it sounds impressive, but the bulk of that revenue is from Rakuten Mobile, which has teamed up with traditional operator KDDI to take a crack at Japan’s mobile market.

What we know about Viber is that it has increased its content monetization — which included advertising, sponsored stickers and more — and that now accounts for the bulk of its revenue, surpassing income from Viber VoIP calling packages. 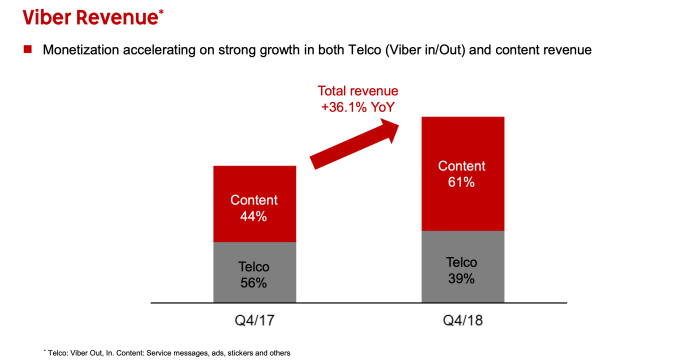 But, again, there’s no raw revenue data here. Rakuten also no longer provides active user information for Viber, which it said has registered more than one billion users since its creation in 2011. That’s not an informative statistic.

Things seem to be so bad that Viber doesn’t even provide an active user number to advertisers, according to a pitch deck seen by TechCrunch. The data shown includes a selection of actions that Viber claims happen per minute, including 1.2 million logins, but there’s no headline monthly active user statistic. Barcelona, which counts Rakuten as a sponsor, and Coke are among the brands that use Viber.

Now the service’s content monetization push has extended into chatbots, but the obvious risk is that companies and brands will simply go elsewhere where, frankly, they already have a larger and more captive audience.

Rakuten bought Viber for $900 million in January 2014, just one month before Facebook forked out $19 billion to acquire WhatsApp. The Viber deal seemed prescient. Sure it didn’t have the same scale as WhatsApp, but it was comparable — 300 million registered compared to WhatsApp’s 450 million active — and teaming with a major internet company would bring a larger budget and opportunities.

The sad reality of today, however, is WhatsApp has grown into one of the world’s most important social services but Viber has floundered. Policies that are as short-sighted as monetizing chatbots will ensure Viber continues to be an also-ran. That surely wasn’t how Rakuten envisaged its acquisition progressing.