José Ancer is first of all a startup lawyer, with a client portfolio of startups of various stages based around Texas and other similar ecosystems outside of Silicon Valley. He’s also the CTO of Egan Nelson LLP, a boutique firm, where he actively is also building automation software to help the firm compete against larger firms. He also writes on his blog “Silicon Hills Lawyer” publicly and pointedly about his profession — and often takes shots at certain practices common among startup law firms, including Silicon Valley firms. You can get a sense of what’s in the full interview via these excerpts.

On not being “owned” by VCs and repeat players

“José has a depth of expertise in startup/company formation/funding issues and is very founder-friendly. He was able to guide us through our seed stage while staying efficient and keeping the billing reasonable.” Mary Haskett, Austin, Texas, CEO, Blink Identity

“I believe, and our clients would confirm, that independence from the VC/repeat player community, combined with deep knowledge of startup financing and high-stakes corporate governance (board issues), allows us to say things, do things, and even write things (on my blog) that the startup community absolutely needs to see and hear, but that “captive” lawyers have been unwilling to offer because of the very real risk of retaliation from influential money players who refer them business. I’ve become a bit of a bête noire of lawyers who’ve built their practices by flouting conflicts of interest and working as company counsel despite being “owned” by VCs across the table.”

On early-stage and being “right-sized”

“I wrote a blog post called ‘The Problem With Chasing Whales.’ It talks about this problem of entrepreneurs hiring law firms that are overkill for what they’re building. We’ve had a lot of clients switch to us from the marquee law firm names, and while the largest complaint is cost — our rates are hundreds of dollars an hour lower because we keep our overhead very lean, while still having top-tier lawyers and lean infrastructure for scalability — another common complaint is responsiveness. You’ve got a million dollar convertible note deal that you need to get done, and to you and your employees, that deal is the world, but the BigLaw lawyer you’re working with has IPOs and unicorn deals pushing your deal to the back of the line. It’s a real problem. Our target profile client exits under $300M in a private deal; which is a type of startup that we think has been very underserved by the traditional hyper-growth oriented law firms in the market.”

On legal technology and automation

“I spend a lot of time talking to legal tech entrepreneurs, because efficiency via legal tech has always been a core value proposition of our firm. As I’ve reviewed and contemplated various tools, one thing I’ve always come back to is this unavoidable tension between flexibility and automation. Software, even cutting edge machine learning, can only handle a minimal level of variation before it breaks down and becomes more hassle (and cost) than it’s worth… Some firms have opted to lean very heavily on the fast automation and standardization side, and accept the rigidity that it inevitably introduces into their workflows… We’ve consciously gone a different direction… Our clients tend to think that constraining the advice startups get by boxing it into inflexible software (and pricing) is not only a penny-wise, pound-foolish confusion of priorities; it’s also exactly the kind of approach that benefits investors at the expense of one-shot common stockholders.” 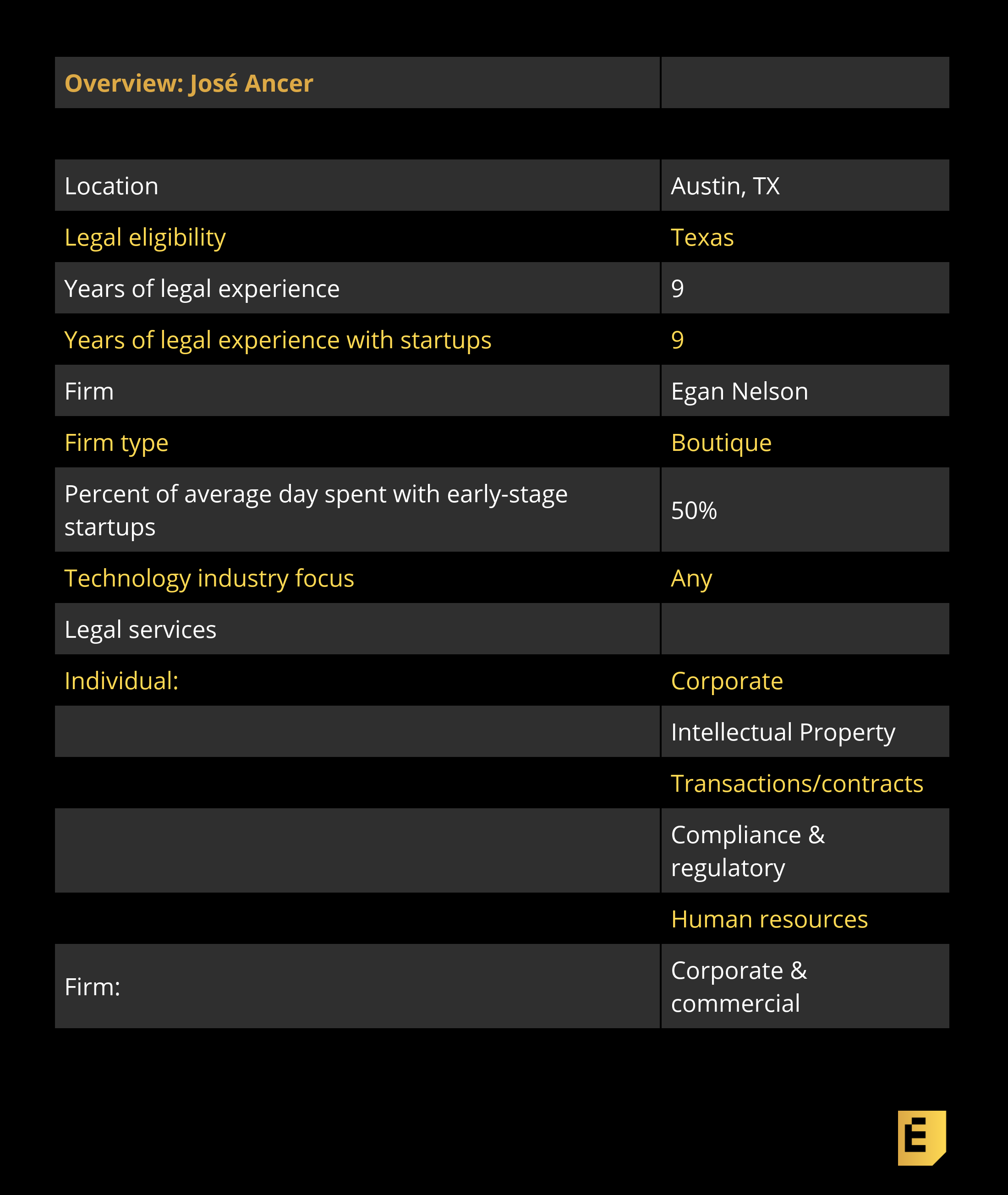 Below, you’ll find the rest of the founder reviews, the full interview, and more details like their pricing and fee structures.

This article is part of our ongoing series covering the early-stage startup lawyers who founders love to work with, based on this survey we have open and our own research. If you’re a founder trying to navigate the early-stage legal landmines, be sure to check out our ongoing series lawyer interviews, plus in-depth articles like this checklist of what you need to get done on the corporate side in your first years as a company. 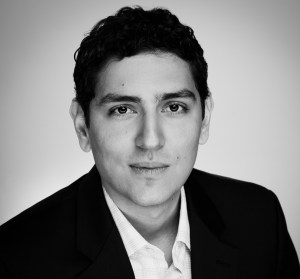 Eric Eldon: You’re pretty outspoken about the state of startup law these days. Break it down for me: what is Egan Nelson doing differently from the other law firms out there?

José Ancer: If you look at the startup legal market, everyone knows the marquee, high priced firms. They represent Facebook, Uber, Palantir, Apple, etc. But when you pay those firms $700 an hour, as an example, 25% ballpark is going to compensation for the lawyers doing the main work. 75% is paying for other stuff. So then the question obviously becomes, how much of that other stuff is really necessary?

Our view is that there’s this segment of the startup market, and I call them non-unicorns, that is far more serious and scaled than what a tiny firm or solo lawyer can handle, but for whom BigLaw is completely overkill. We see these companies a lot more in places like Austin, Denver, Seattle, New York, etc., and it’s why our focus is on those markets.

If you look at our lawyers’ credentials, you’ll see a whole lot of Stanford, Yale, Harvard, etc., as well as marquee firm alumni. What you won’t find at our firm is ludicrously expensive office space, cute events that have nothing to do with legal counsel, or armies of staff that don’t deliver real value to the end-service for clients.

Our legal talent is paid very well, but our overhead infrastructure is designed for companies that sell as a private company for under $300 million, or perhaps operate indefinitely as profitable companies. These are “startups” that might be derisively labeled as “doubles” or “singles” in parts of Silicon Valley, but we think have been substantially underserved by the market.