Twitter’s new prototype testing program isn’t the only way it’s working to fix conversations on its site. The company confirmed it’s currently running another public-facing test focused on making Twitter “more conversational” — but this time with Retweets instead of Replies. The test involves using a thin line to connect a quote-style retweet to the person commenting on the tweet, instead of placing the quoted tweet in a box as before.

Here are some visual aids. 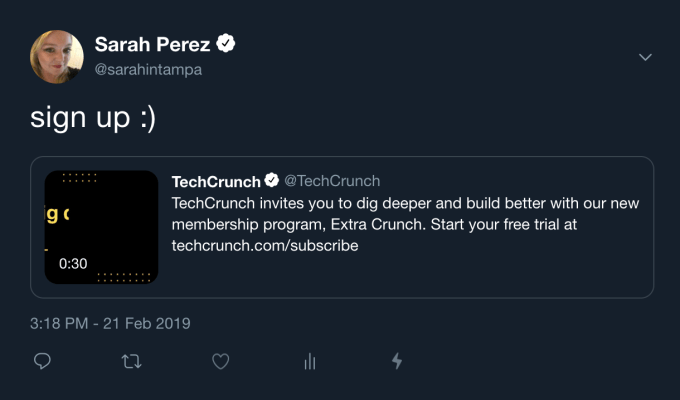 The new test sees Twitter eliminating the box entirely, and connecting the comment to the tweet using the same sort of line that is used today with Replies.

For example, here is a before and after of the change. (Click through to the tweet to view the images larger). You can see the original look on the left, and the update using the line on the right:

We asked Twitter if this was a permanent change or just a test, and a spokesperson confirmed it was the latter.

The test was available on Android on Tuesday of this week, but began rolling out to iOS users yesterday.

Despite the launch of the new testing program, the company said it would continue to A/B test various conversational features and other changes within its public app.

“The fact that we’re doing this [Twitter prototype testing program] doesn’t mean that we don’t do regular testing – like we do with all our development processes in our regular app all the time,” Sara Haider, Twitter’s director of product management, noted in an interview at CES in January.

The prototype program, meanwhile, serves as more of an experimental testing grounds where Twitter users are able to directly influence the development process with their feedback and opinions.

Twitter had learned over the years that some of the best ideas come from the community itself. Many of its products — including @ Replies, the hashtag (#), tweetstorms (now “threads”) and Retweets (originally “RT”) — were developed in response to how people were already using Twitter. Now, Twitter hopes to tap into the hive mind to build whatever else is coming next.

But not all of Twitter’s changes are community-driven. (After all, I’m not sure anyone was really all that concerned about how Retweets were displayed.)

Whether or not the lines will eventually come to replace the box for Retweets still remains to be seen, however. While it does make the comment seem more like someone is continuing a conversation, the update arguably makes it easier to confuse a Retweet with a Reply, too.

“We’re working on updates to Retweet with Comment as part of our efforts to make Twitter more conversational,” a spokesperson for Twitter confirmed to TechCrunch. They also hinted we’d see more tests of this nature in the future, as well.