Pressed to explain who is using them, and why, 99 percent of cryptocurrencies let out all their air, go flying around the room making a raspberry sound, hit the wall and fall behind the couch forever.

The party is over. A few, however, can present a credible use case. “Tokenized securities” could be one of them: a more open and efficient way to transact shares and notes as well as distribute cash flows.

Proponents of “security token offerings” (STOs) have been telling that story now for a little more than a year. This data report canvases the market, finds few are buying it, interviews market participants for perspective and reveals gaps in the use case at the ground level that explain its failure to thrive.

In October 2017, the market for “initial coin offerings,” or ICOs, reached a peak, with more than 100 capital raises closing through the sale of crypto tokens, according to market data provider Token Data. Proponents thought these tokens were an innovation on par with the joint stock corporation: not a claim on cash flows, but a vessel to participate in and directly capture the value latent in network effects. “Tokenized” networks raising money that month ranged from the prosaic, like a no-fee crypto exchange called Cobinhood ($13.2 million), to the ludicrous, like Dentacoin, “the blockchain solution for the global dental industry” ($1.1 million).

At the time, it was nearly unheard-of for such a project to acknowledge its token might be a security like the mundane stock certificate. In the following months, the US Securities and Exchange Commission (SEC) sent dozens of subpoenas to token issuers, indicating that they disagreed. By the following March, the number of SEC registrations for new token offerings equaled more than half the total ICO deal activity for the month.

As SEC moved in and ICOs cooled, a new enthusiasm for paperwork 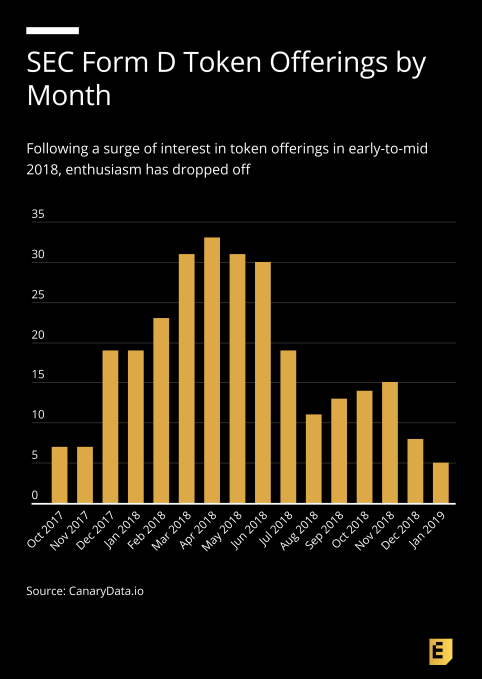 The sudden popularity in 2018 of the so-called “security token” was undoubtedly a scramble to paper over cash grabs. However, there is a use case for “tokenized securities” that is worth considering. Bitcoin showed how ownership could be digitally secured and transferred without intermediaries. A tokenized security could do the same for investment contracts. “Smart contracts” are a value proposition that has been discussed in cryptocurrency since long before Bitcoin.

There is reason to be optimistic that this form of programmable ownership can bring efficiency, transparency, liquidity and access to the $1.7 trillion annual US private placement market. The value proposition is that smart contracts will reduce the cost of compliance in primary issuance and secondary trading. Issuers benefit by reduced liquidity premiums and more buyers to compete for their offering. Investors benefit by gaining more access to opportunities for growth-stage investment. This is a compelling story in US capital markets that have, for nearly two decades, starved retail investors of exposure to growth-stage investments.

This value proposition, and a narrative of regulatory chill in the markets, have led some to believe that tokenized securities would bring back a bull market in crypto. The Wall Street hype machine has moved on from crypto; security tokens are one of the few areas in which the avid listener can detect faint echoes of its passing.

From 30,000 feet up, the use case for tokenized securities looks compelling. As with many blockchain-based projects, zoom down to the user level and misaligned incentives appear for key market participants.

If you build it, will they come?

To determine whether new tokenized security issuance is finding a fit in the market, Canary Data, an open crypto research initiative, undertook an exhaustive search of news wires and the SEC’s EDGAR database, beginning in 2017 and ending mid-January, looking for public statements and filings related to security token offerings. It’s an imperfect method; our database of offerings is constantly evolving as new information becomes available. But in an emerging segment of the financial markets it reflects the level of credible, mainstream activity.

We filtered out tokens that are in the mold of the ICO “utility token,” offering a financial instrument as a form of access to a valuable network effect. Many of these have registered as securities, but it is the value proposition of a tokenized tradtional security — a claim on cash flow, represented as a token — that we are interested in.