In what may well be the most Samsung move in Samsung history, Samsung just introduced four new Samsung S10 models. For the 10th anniversary of the flagship line, Samsung is going all in on this thing. And with more information expected on Samsung’s upcoming foldable, well, that’s a lot of Samsungs, Samsung. 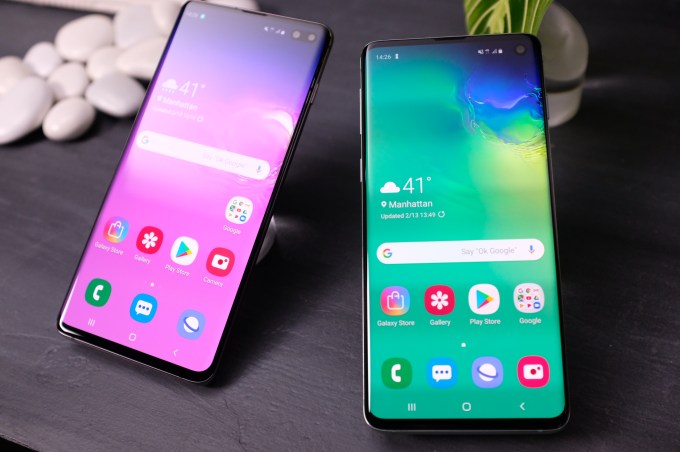 Before we dive in to what’s bound to be a lot of words about a lot of phones, here’s the basic breakdown of the line:

And hey, look, Greg made a handy chart of all of the key specs.

As for what’s new beyond the sheer number of devices, the top-line features are as follows: edge-to-edge display with pinhole cutout, three rear-facing cameras and Wireless PowerShare, which uses the phone to wirelessly charge other handsets and the company’s new Galaxy Buds. Of course, some of those features vary by SKU.

Unlike the 10th anniversary iPhone a couple of years back, the S10 isn’t an attempt to rethink the product on the occasion of the line’s own first decade. Instead, the device finds Samsung adding more flagship features atop of what is already a pretty massive pile.

Those who’ve followed the Galaxy line with even passing interest will find that the S10 looks pretty familiar.  The most distinguishing bit of design language this time out is, naturally, the “Infinity-O” display. One of several screen technologies the company highlighted at last year’s developer conference, the “O” is exactly what it sounds like — a hole punch up top for the camera to peek through. 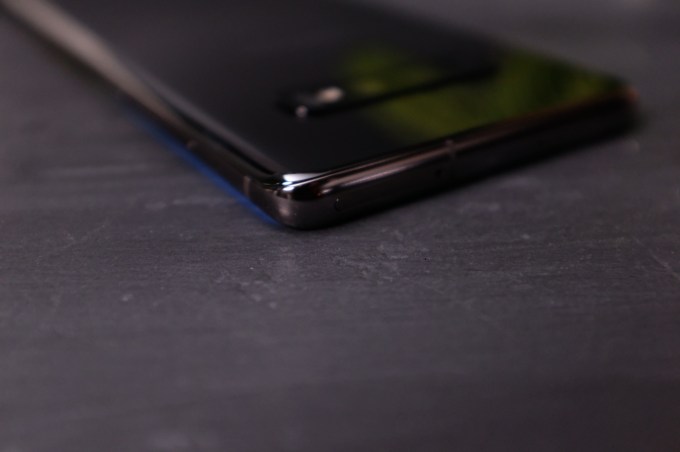 Unlike most of the rest of the industry, Samsung just skipped over that whole notch business, in favor of even more screen. Of course, the S10’s not the first handset with a pinhole — hell, it’s not even the first Samsung with one. That designation, interestingly enough, belongs to the A8, a mid-range handset introduced late last year for the China market — surely an indication of a company dealing with increased pressure from companies like Huawei and Xiaomi.

The company says the feature was designed with a “precision laser,” leaving the phone with an impressive screen-to-body ratio of 93.1 percent. This is helped along with the addition of an under-display fingerprint reader. Again, the S10 isn’t the first handset with an in-screen fingerprint sensor (OnePlus, among others, brought one to market last year), but the company is among the first to use Qualcomm’s new technology. 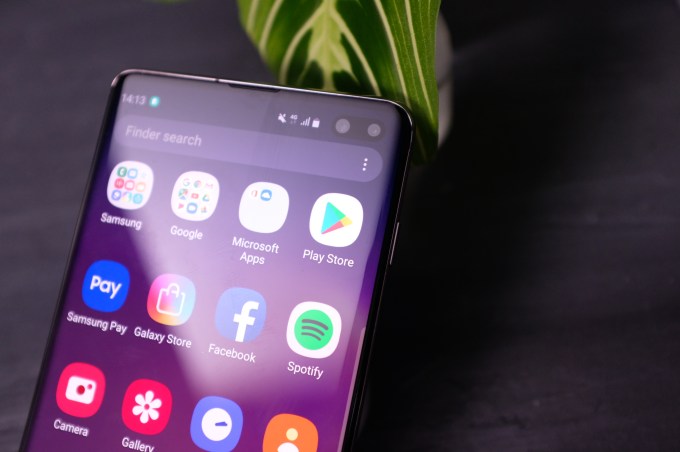 Announced in December at the Snapdragon summit, the reader adds an extra level of security beyond some of the already available options. The ultrasonic technology gives the system a fuller, more three-dimensional look at the fingerprint, making it more difficult for would-be thieves to spoof. Fingerprint info is stored on-device in a secure Knox folder.

It can be activated without turning the screen on, for quicker access, though, notably, may have some difficulty with thicker screen protectors. Samsung — and, likely, everyone else who utilizes Qualcomm’s new tech — will be working with accessory makers to market ones that play nicely with the tech.

The most fun feature here is, no doubt, Wireless PowerShare. It’s another spot where Huawei beat the company to the punch, but it’s a compelling feature nonetheless  — and hey, it definitely beat Apple to the feature. Closest you get for iOS devices is the new iPad Pro’s ability to charge handsets via USB-C. 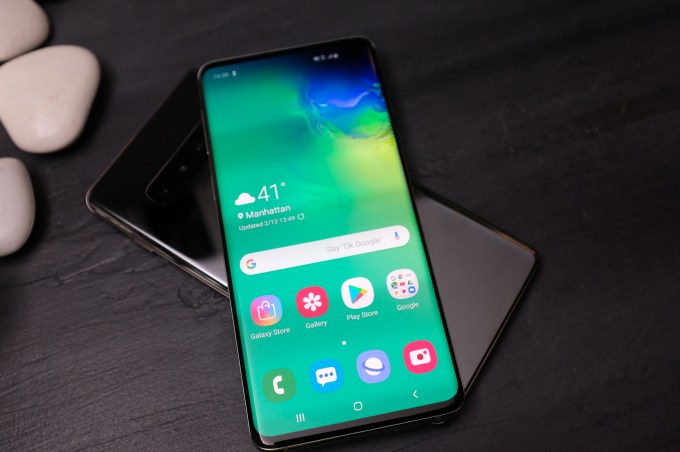 Here, all of the charging is done on contact — which means, granted, that you won’t be getting much use out of the phone while using the feature. It’s still handy, particularly when traveling. Plug in the S10. Plop it down and charge up another handset while you charge it up. The tech is compatible with Qi, so it will play nicely with third-party charging pads. It also, naturally, works with the Galaxy Buds, Samsung’s newly announced Bluetooth earbuds that beat Apple to the punch with a wireless charging case.

All of this is powered by some pretty beefy batteries, at 3,100 mAh for the S10e, 3,400 for the S10 and 4,100 for the S10+. Samsung notably began loosening up a bit on battery size last year, with its Note 7 woes now safely in the rear-view. As a matter of fact, the 5G packs a whopping 4,500 mAh battery to help offset drain from cellular usage and that massive display.

Of course, it wouldn’t be a new Galaxy without some camera news. Once again, the leaks were true. The base-line sports three cameras, configured horizontally, along with a flash. Honestly, the cutout looks a bit like a Microsoft Kinect camera configuration. What, precisely, the three lenses do wasn’t clear until now, however. After all, handset makers are using multiple camera setups for all manner of different reasons. 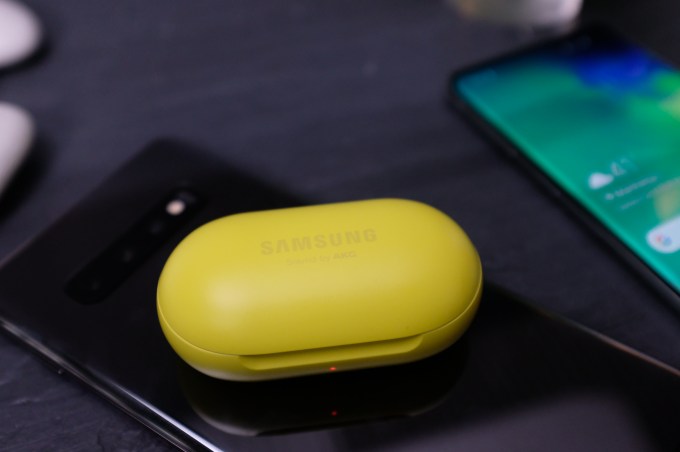 Here, the different cameras are being put to use to offer different focal points. There’s an ultra-wide lens offering 123-degree shots (16 megapixel), a standard wide lens with 77-degree shots and a third that does 2x optical zoom  (both 12 megapixel). Rear-facing video gets improved digital image stabilization, while the  front-facing can now do 4K, for ultra-high-res selfies, I suppose.

Of course, most of the camera upgrades we’ll be seeing in the foreseeable future will be powered by software, and as such, there are a number of improvements on that side, as well. Most notably is the use of neural processing to identify up to 30 different scenes and offer shot suggestions accordingly. Again, similar to much of the AI applications currently in use with various different Android handsets — as ever, I’m excited to get my hands on the damn thing to take it through its paces.

All of the above are, naturally, 1P68 — and yes, the headphone jack is still on-board. Samsung has done a good job turning that one-time ubiquitous port into a feature and differentiator from an increasing number of competitors. All sport the latest Snapdragon 855, and the S10 offers up to 1TB of storage.

Pre-orders for the S10e, S10 and S10+ start February 21. The handsets go on sale March 8. The 5G, meanwhile, is set to arrive at some point in Q2, as a Verizon exclusive. Sprint and T-Mobile versions will follow later.