Although it’s not the sexiest of industries, the hefty construction sector in 2018 attracted not only the attention but, more importantly, the dollars of investors.

Historically, the multi-trillion-dollar sector has been slow to adopt new technologies, as builders rely on a variety of disparate systems to manage projects, traditional building methods to construct homes and non-smart materials.

But a wave of startups is looking to capitalize on opportunities within the sector. Companies that have developed software solutions aimed at streamlining processes and increasing efficiencies are increasingly common. Prefab construction has evolved thanks to innovation in that space, and 3D printing technology can create homes in a matter of days.

Investors are taking notice. Funding in U.S.-based construction technology startups surged by 324 percent, to nearly $3.1 billion in 2018 compared with $731 million in 2017, according to Crunchbase data. While the 2018 numbers are impressive, it’s important to note that a few large rounds did take place last year and thus skewed the results. One startup alone, Menlo Park-based Katerra, brought in $865 million from SoftBank Vision Fund, RiverPark Ventures and Four Score Capital in a Series D round last January. And, smart glass company View closed a $1.1 billion Series H in November. Also, Procore, a (unicorn) provider of cloud-based construction management applications, in December raised a $75 million Series H round from Tiger Global Management. 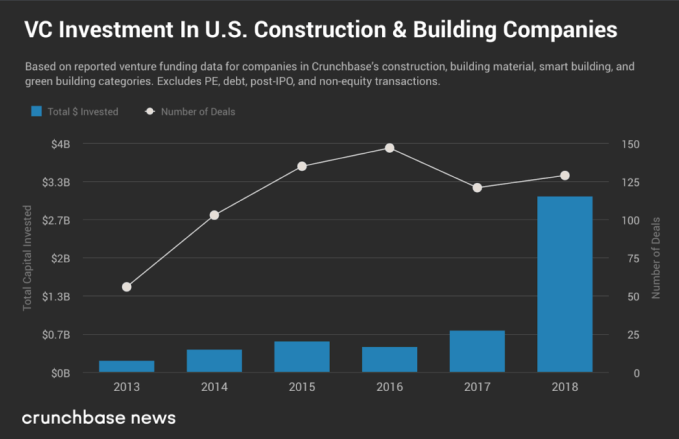 The industry continues to see M&A activity. Larger software companies are recognizing that it makes more sense to acquire companies in this space rather than try to reinvent the wheel from within. For example, in the fourth quarter of last year, 3D design software provider Autodesk announced plans to acquire two cloud-based software startups in the space: PlanGrid for $875 million and BuildingConnected for $275 million. Publicly traded software developer Trimble in July acquired construction management software startup Viewpoint for $1.2 billion.

Jerry Chen, partner at Greylock Partners, is bullish on the sector and expects 2019 will only see more funding and acquisitions. His firm invested in San Francisco-based Rhumbix, which has raised $28.6 million to grow its mobile platform designed for the construction craft workforce. That company, he says, had a “record year” in terms of customers and users.

“2018 was an inflection point for the construction tech industry,” Chen told Crunchbase News. “Major venture investing and strategic M&A by incumbent players continued… and I think you will see other major enterprise software companies begin to invest more in construction in 2019.”

One construction tech startup founder, Nick Carter of Chicago-based IngeniousIO, believes that despite the big numbers, the industry has a ways to go in terms of true startup growth. Part of that is simply due to one thing: tech founders and some investors are intimidated by the space.

“A lot of people don’t understand it,” he said. “There’s a massive learning curve. Companies have been building buildings the same way for hundreds of years and not everyone understand its complexities.”

The fact that construction is a largely unregulated industry is also a factor, Carter believes.

“Eventually money will flow into the sector because of the pure size of the market,” he told Crunchbase News. “The money is there. There are VCs at every angle wanting to get into this space, but they’re looking for the right opportunities. There just aren’t a ton of startups in the space.”

Construction is also a very cyclical business, and one has to wonder if a potential economic downturn would give investors pause. But to Carter, a downturn would only create more need for products like the one his company is working to build. IngeniousIO’s platform uses artificial intelligence to redefine the process of construction projects by creating what Carter describes as “a unifying, data-driven approach.”

“Tighter budgets are where a company like ours can do very well,” he said. “Companies wouldn’t have the overhead of outdated apps that take a significant amount of support to manage, scale and implement.”

The construction sector may not have the cache of other more Twitter-friendly markets, but it does have the sheer size and potential to provide ripe soil for investors willing to break ground on new opportunities.