ChargedUp, a U.K. startup that offers a mobile charging network that takes inspiration from bike sharing, has closed £1.2 million in seed investment. Leading the round is Sir John Hegarty’s fund The Garage, and the ex-Innocent Smoothie founders fund JamJar. The funding will be used to grow the offering across the U.K. and for international expansion.

Founded by Hugo Tilmouth, Charlie Baron, Hakeem Buge and Forrest Skerman Stevenson, ChargedUp has set out to solve the dead mobile phone battery problem with a charging network. However, rather than offer fixed charging points, the team has developed a solution that lets you rent a mobile charging pack from one destination and return it at a different location if needed. That way, mobile phone use remains mobile.

“It’s annoying and inconvenient to be out and about with a dying phone battery,” says CEO Hugo Tilmouth. We’ve all been there and I was inspired to do something about it through my own experiences. I was at a cricket match at London’s Lord’s Cricket Ground and waiting for a call for a last round interview with a large tech firm, and was running very low on charge! I ended up having to leave the cricket ground, buy a power bank and then rode a Boris Bike home and the light bulb went off in my head! Why not combine the flexibility of the sharing economy with the need of a ‘ChargedUp’ phone!”

The solution was to create multiple distribution points across a city, located in the venues where people spend most of their time. This includes cafes, bars and restaurants. “Our solution uses an app to enable users to find the nearest stations, unlock a sharable power bank and then return it to any station in the network and only pay for the time they use. Our goal is to be never five minutes from a charge,” adds Tilmouth. 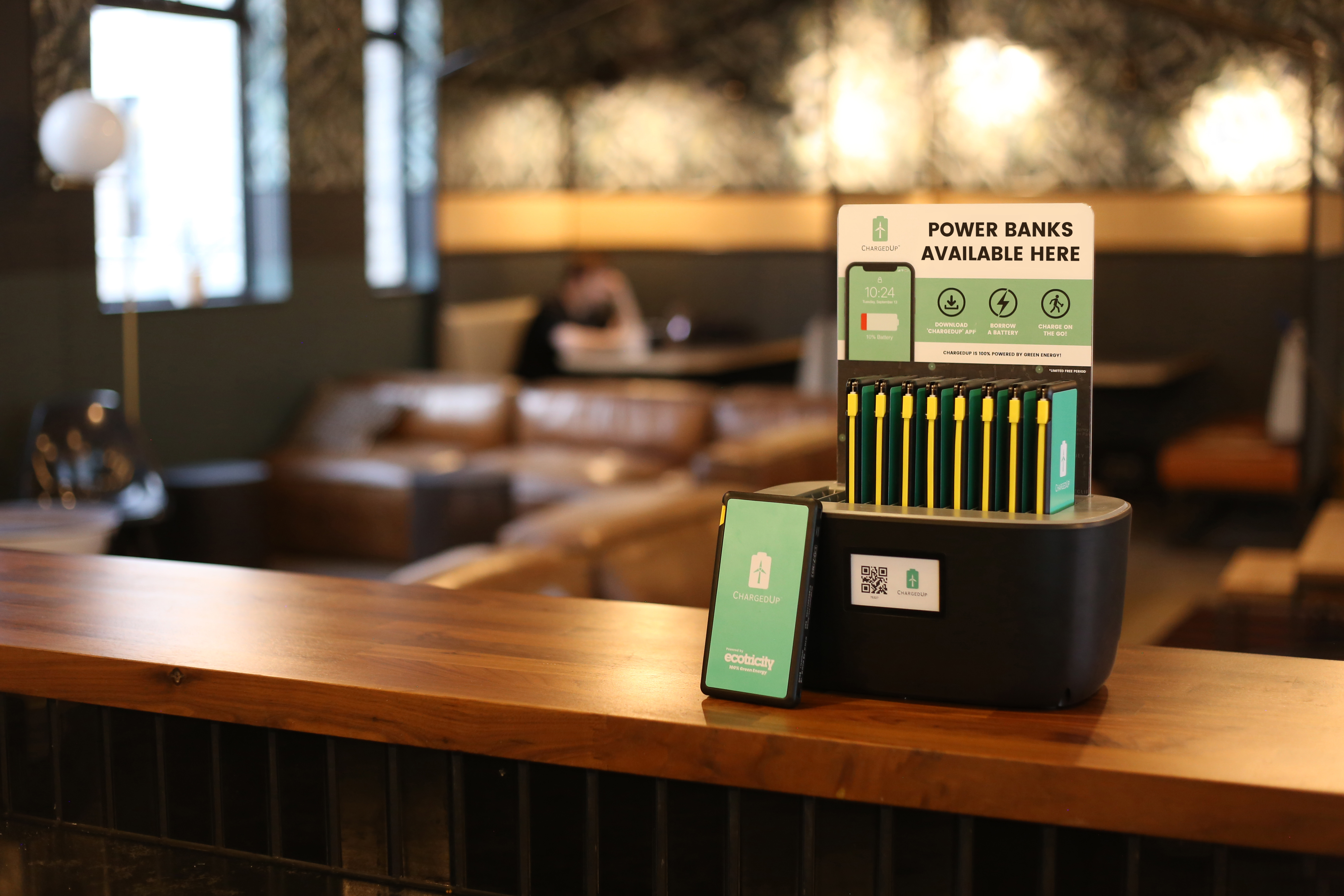 In the next six months, ChargedUp says it will expand its network of over 250 vending stations in London’s bars, cafes and restaurants across to other large metropolitan areas in the U.K. Last month, the young startup partnered with Marks & Spencer to trial the platform in its central London stores. If the trial is successful, ChargedUp says it could lead to providing its phone-charging solution to all M&S customers by the end of 2019.

“Since launch we have delivered over 1 million minutes of charge across the network, and our customers love the service,” says Tilmouth. “Like the sharing scooter and bike companies, we operate a time-based model. We simply charge our users a simple price of 50p per 30 mins to charge their phones. We also make revenue from the advertising space both on our batteries and within our app.”

With regards to competition, Tilmouth says ChargedUp’s most direct competitor is the charging lockers found in some public spaces, such as ChargeBox. “We do not see this as a viable alternative to ChargedUp as users are forced to lock their phones away preventing them from using them while it charges. They are also prone to theft and damage. We are also differentiated by our use of green energy offsetting throughout the network,” he says.

Meanwhile, in a statement, investor Sir John Hegarty talks up the revenue opportunities beyond rentals, which includes advertising, rewards and loyalty. “At its simplest, ChargedUp addresses a massive need in the market, mobile devices running out of power. But more than that, ChargedUp provides advertisers with a powerful medium that connects directly with their audience at point of purchase,” he says.

Prior to today’s seed round, ChargedUp received investment from Telefonica via the Wayra accelerator and Brent Hoberman’s Founders Factory.