Twitter has been secretly developing an enhanced camera feature that’s accessible with a swipe from the home screen and allows you to overlay captions on photos, videos, and Live broadcasts before sharing them to the timeline. Twitter is already used by people to post pictures and videos, but as it builds up its profile as a media company, and in the age of Snapchat and Instagram, it is working on the feature in hopes it will get people doing that even more.

Described in Twitter’s code as the “News Camera”, the Snapchat-style visual sharing option could turn more people into citizen journalists… or just get them sharing more selfies, reaction shots, and the world around them. Getting more original visual content into Twitter spices up the feed and could also help photo and video ads blend in. 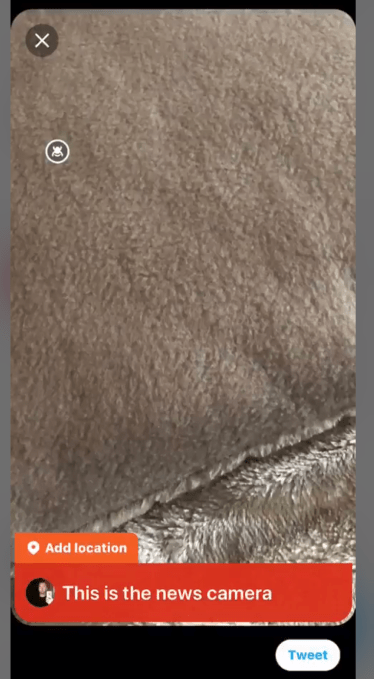 Prototypes of the new Twitter camera were first spotted by social media consultant Matt Navarra a week ago, and he produced a video of the feature today.

He describes the ability to swipe left from the homescreen to bring up the new unified capture screen. After you shoot some media, overlays appear prompting you to add a location and a caption to describe “what’s happening”. Users can choose from six colored backgrounds for the caption and location overlay card before posting, which lets you unite words and imagery on Twitter for the first time to make a splash with your tweets.

Has a redesigned composer UI too.

Meanwhile, code digger and frequent TechCrunch tipster Jane Manchun Wong has found Twitter code describing how users should “Try the updated Twitter camera” to “capture photos, videos, and go live”. Bloomberg and CNBC had previously reported that Twitter was building an improved camera, but without feature details or screenshots.

Twitter confirmed to TechCrunch that it’s currently developing the new camera feature. A Twitter spokesperson told us “I can confirm that we’re working on an easier way to share thing like images and videos on Twitter. What you’re seeing is in mid-development so it’s tough to comment on what things will look like in the final stage. The team is still actively working on what we’ll actually end up shipping.” When asked when it would launch, the spokesperson told us “Unfortunately we don’t have a timeline right now. You could expect the first half of this year.” 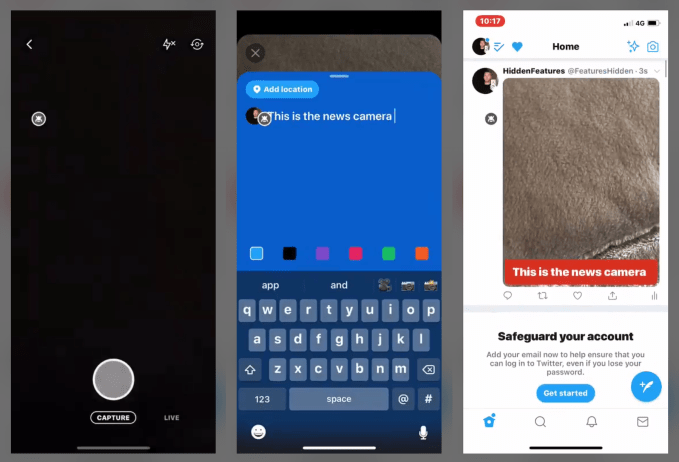 Twitter has largely sat by as visual sharing overtook the rest of the social media landscape. It’s yet to launch a Snapchat Stories feature like almost every other app — although you could argue that Moments was an effort to do that — and it seems to have neglected Persicope as the Live broadcasting trend waned. But the information density of all the words on Twitter might make it daunting to mainstream users compared to something easy and visual like Instagram.

This month, as it turns away from reporting monthly active users, Twitter reported daily active users for the first time, revealing it has 126 million that are monetizable compared to Snapchat’s 186 million while Instagram has over 500 million.

The new Twitter camera could make the service more appealing for people who see something worth sharing, but don’t always know what to say,