Two older iPhone models are back on sale in Apple stores in Germany — but only with Qualcomm chips inside.

The iPhone maker was forced to pull the iPhone 7 and iPhone 8 models from shelves in its online shop and physical stores in the country last month, after chipmaker Qualcomm posted security bonds to enforce a December court injunction it secured via patent litigation.

Apple told Reuters it had “no choice” but to stop using some Intel chips for handsets to be sold in Germany. “Qualcomm is attempting to use injunctions against our products to try to get Apple to succumb to their extortionist demands,” it said in a statement provided to the news agency.

Apple and Qualcomm have been embroiled in an increasingly bitter global legal battle around patents and licensing terms for several years.

The litigation follows Cupertino’s move away from using only Qualcomm’s chips in iPhones after, in 2016, Apple began sourcing modem chips from rival Intel — dropping Qualcomm chips entirely for last year’s iPhone models. Though still using some Qualcomm chips for older iPhone models, as it will now for iPhone 7 and iPhone 8 units headed to Germany.

For these handsets Apple is swapping out Intel modems. Although the injunction obtained by Qualcomm via the patent litigation affects chips from another chipmaker, Qorvo, according to Reuters. The litigation itself relates to a patented smartphone power management technology.

An Intel spokesman told us that Qorvo chips are not contained in its modems and are a separate part, sourced separately by phone makers. “The modem and the Qorvo chip do interact with each other for power management,” he said.

Despite that, Apple has swapped out Intel components in the handsets headed to Germany, where its local webstore is again listing the two older iPhone models for sale… 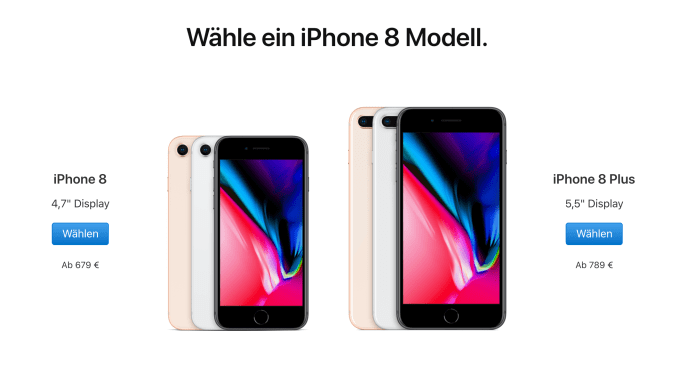 Newer iPhones containing Intel chips remain on sale in Germany because they do not containing the same components subject to the patent injunction.

“Intel’s modem products are not involved in this lawsuit and are not subject to this or any other injunction,” Intel’s general counsel, Steven Rodgers, said in a statement to Reuters.

While Apple’s decision to restock its shelves with Qualcomm-only iPhone 7s and 8s represents a momentary victory for Qualcomm, a separate German court tossed another of its patent suits against Apple last month — dismissing it as groundless. (Qualcomm said it would appeal.)

The chipmaker has also been pursing patent litigation against Apple in China, and in December Apple appealed a preliminary injunction banning the import and sales of old iPhone models in the country.

At the same time, Qualcomm and Apple are both waiting the result of an antitrust trial brought against Qualcomm’s licensing terms in the U.S.

Two years ago the FTC filed charges against Qualcomm, accusing the chipmaker of operating a monopoly and forcing exclusivity from Apple while charging “excessive” licensing fees for standards-essential patents.

The case was heard last month and is pending a verdict or settlement.

This report was updated with a correction after we reported that Qorvo chips are contained in Intel modems. In fact Intel told us the Qorvo components are separate to its modems and separately sourced by device makers