Patreon is aggressively pursuing a new three-year product vision that is, in the words of SVP of Product Wyatt Jenkins, to build “the world’s best membership SaaS product for creators.” With about 90 engineers and product managers, the company sees an opportunity to own a particular niche that’s not well served by other B2B software and is also a growing market.

In this section of the Patreon EC-1, I dive into Patreon’s product strategy, analyzing its history and current approach.

Reading time for this article is about 18 minutes. It is part of the Extra Crunch EC-1 on Patreon. Feature illustration by Bryce Durbin / TechCrunch.

The six-year-old startup enables independent content creators to finance their pursuits by converting their most dedicated fans to monthly memberships. Those memberships provide special perks to the fans — like exclusive content, access to private discussion groups, first dibs on tickets, etc. — and stable, recurring revenue to the creator. (Patreon makes its money by taking a cut of that revenue.)

Patreon is building business software distinct to the fan-artist relationship. Creators have a base of superfans who want to support them and get special access. Creators are their business — their fans specifically want them and the content they create. This is why creators often get a manager or agent to handle their business when they find success, whereas a small business owner would normally do the opposite (become a manager and delegate product creation and customer interaction).

Creators need business tools for non-business people. As a result, Patreon’s core product includes a CRM, CMS, analytics, and payments platform with a lot of proactive guidance on what to do (like telling creators in a step-by-step manner when to, say, message certain patrons in order to reduce their risk of churning).

This is what SVP of Product Wyatt Jenkins calls “a lean-forward CRM.” It is simplified for non-technical users to navigate (lacking a lot of the flexibility other businesses want), which results in an ongoing challenge to make it more advanced without making it more complicated.

Patreon acts a bit like a business partner, not just a tech platform. In terms of human interaction, it goes beyond technical support to provide advice on business strategy, both on a creator-by-creator basis and in a scalable way through educational webinars, articles, and events. The business model of earning a commission rather than charging a monthly subscription, like normal SaaS companies do, also fits the particular dynamics of media and entertainment, where it is standard for a creator’s business partners (talent manager, agent, business manager, lawyer) to get paid on commission.

“We’re not here to help them do art. They don’t need help doing art,” explained Jenkins, “We’re here to be their hard-core business manager friend who is like ‘no no no, you need to do this.’” He added that there’s an emotional element that is distinct in working with artists as well: “We deal with a constituency for whom price creates anxiety…it’s all wrapped up in their self-worth. So it’s part of our job in that onboarding funnel to give them the confidence to say ‘the thing you do is real and valuable…you should be okay charging for that.’”

The early product development of Patreon

For the majority of Patreon’s life, its platform has been — to varying degrees — a social marketplace with creator profiles requesting funding and featuring content, patron profiles showing the creators they support, and discovery features for patrons to find new creators. 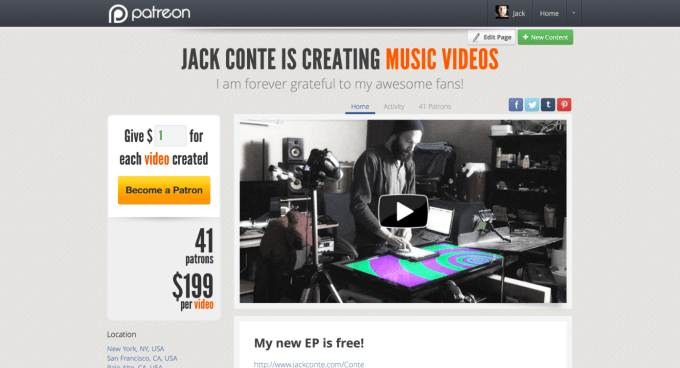 Modeled as a recurring Kickstarter, the “ask” on each creator’s profile when Patreon first launched was to commit to funding them at a set dollar amount for each creation (video, song, cartoon, etc.) they released. The creator would keep posting their content online for free, but incentivized potential patrons with perks for committing to certain donation tiers ($1, $3, $10, etc.). Fans entered a dollar amount to contribute and set a cap for the maximum they could be charged per month. 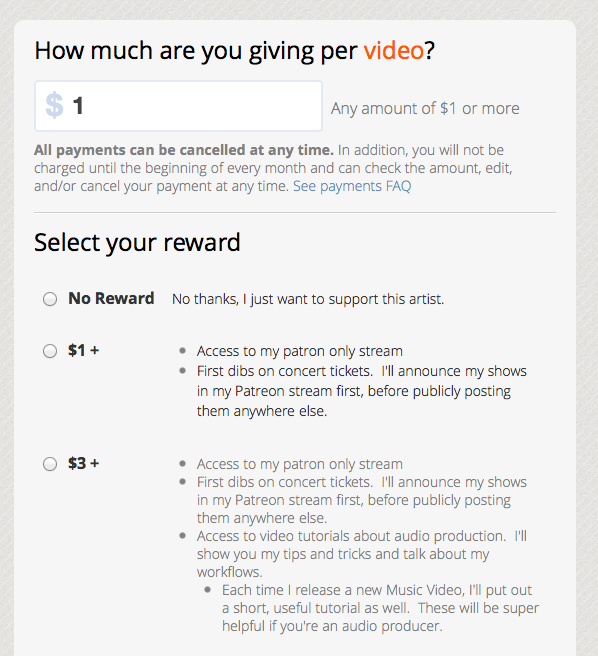 In the original conception of Patreon, patrons would pay per piece of content that a creator made.

Co-founder and CEO Jack Conte was the first creator on the platform and explained the concept to his fans in the video below.

During the first two months of Patreon, the team noticed many creators were trying to “hack” its model of paying per creation to offer a flat per month payment option, so they added that functionality. By 2015, roughly 80 percent of creators were using the per-month payment model that now defines Patreon’s membership business model, according to CTO Sam Yam. Per-month payment was made the default setting for creator benefit tiers and later the option for new creators on the platform to choose the per-creation model was removed.

In 2014, Patreon redesigned its platform to emphasize content consumption rather than creator profiles. It was a move to become more like a media platform for consumers, with the discovery and crowdfunding of creators happening as a natural byproduct. At the time, Conte told TechCrunch’s John Biggs, “Think about why people love and share something online. It’s because of the content. We wanted to showcase what the artists were doing instead.” 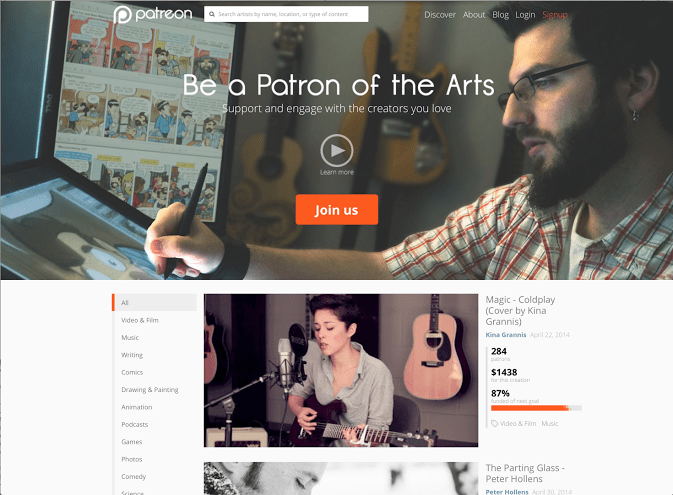 Patreon soon faced a tension in its burgeoning marketplace. To increase engagement, it wanted to help patrons discover more creators. Yet, many patrons were coming in on the recommendation of a creator, and so Patreon was essentially taking that superfan and awkwardly directing that user to other creators — possibly even competitors. So the product shifted its focus back to the pages of individual creators, which were the primary landing pages for new patrons.

One year ago, the company launched Patreon Lens, a copycat of Snapchat Stories and Instagram Stories enabling creators to share daily behind-the-scenes video exclusively with their patrons. It was the last major product release in pursuit of the vision that Patreon should be a daily destination for content consumption — competing with YouTube, Instagram, Snapchat, and other dominant social platforms — in order to help creators convert and retain patrons. 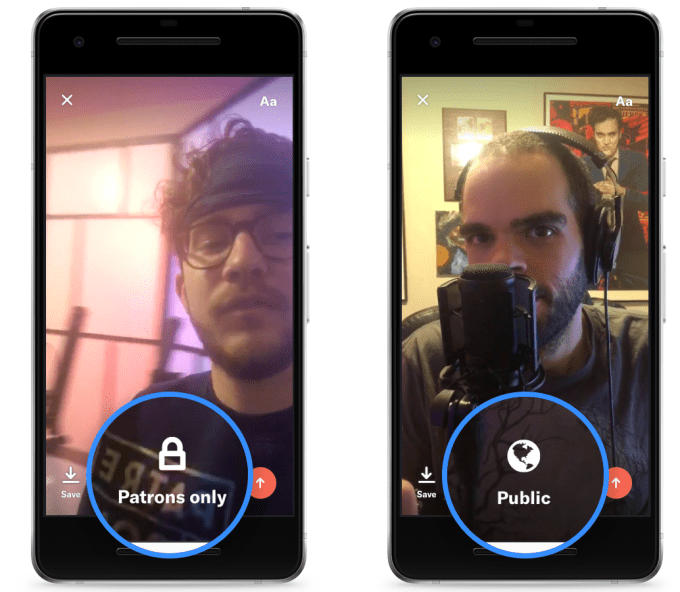 A screenshot of Patreon’s app Patreon Lens, which allowed users to view behind-the-scenes content from creators