China celebrated Lunar New Year last week as hundreds of millions of people travelled to their hometowns. While many had longed to see their separated loved ones, others dreaded the weeklong holiday as relatives awkwardly caught up with them with questions like: “Why are you not married? How much do you earn?”

Luckily, there are ways to survive the festive time in this digital age. Smartphone usage during this period has historically surged. Short video app TikTok’s China version Douyin noticeably took off by acquiring 42 million new users over the first week of last year’s holiday, a report from data analytics firm QuestMobile shows. Tencent’s mobile game blockbuster Honor of Kings similarly gained 76 percent DAUs during that time, according to another QuestMobile report.

People also hid away by immersing themselves in the cinema during the Lunar New Year, a movie-going period akin to the American holiday season. This year, China wrapped up the first six days of the New Year with a record-breaking 5.8 billion ($860 million) yuan box office, according to data collected by Maoyan, Alibaba’s movie ticketing service slated for an initial public offering.

The new benchmark, however, did not reflect an expanding viewership. Rather, it came from price hikes in movie tickets, market research firm EntGroup suggests. On the first day of Year of the Pig, tickets were sold at an average of 45 yuan ($6.65), up from 39 yuan last year. That certainly put some price-sensitive audience off — though not by a huge margin as there wasn’t much to do otherwise. (Shops were closed. Fireworks and firecrackers, which are traditionally set off during the New Year to drive bad spirits away, are also banned in most Chinese cities for safety concerns.) Cinemas across China sold 31.69 million tickets on the first day, a slight decline from last year’s 32.63 million. 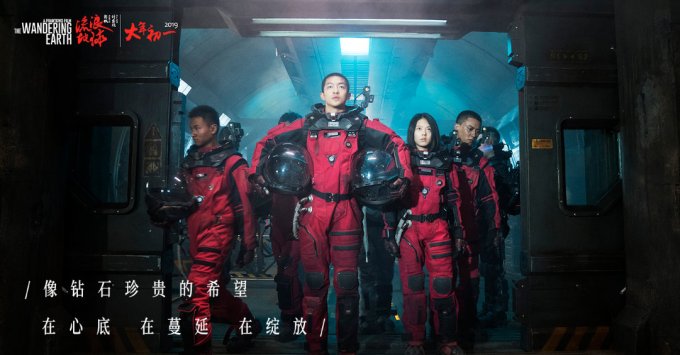 Many Chinese companies don’t return to work until this Thursday, so the box office results are still being announced. Investment bank Nomura put the estimated total at 6.2 billion yuan. What’s also noticeable about this year’s film-inspired holiday peak is the fervor that sci-fi The Wandering Earth whipped up.

American audiences may find in the Chinese film elements of Interstellar’s space adventures, but The Wandering Earth will likely resonate better with the Chinese audience. Adapted from the novel of Hugo Award-winning Chinese author Liu Cixin, the film tells the story of the human race seeking a new home as the aging sun is about to devour the earth. A group of Chinese astronauts, scientists and soldiers eventually work out a plan to postpone the apocalypse — a plot deemed to have stoke Chinese viewers’ sense of pride, though the rescue also involves participation from other nations.

The film, featuring convincing special effects, is also widely heralded as the dawn of Chinese-made sci-fi films. The sensation gave rise to a wave of patriotic online reviews like “If you are Chinese, go watch The Wandering Earth” though it’s unclear whether the discourse was genuine or have been manipulated.

This record-smashing holiday has also been a big win for Alibaba, the Chinese internet outfit best known for ecommerce and increasingly cloud computing. Its content production segment Alibaba Pictures has backed five of the movies screened during the holiday, one of which being the blockbuster The Wandering Earth that also counts Tencent as an investor.

Tech giants with online streaming services are on course to upend China’s film and entertainment industry, a sector traditionally controlled by old-school production houses. In its most recent quarter, Alibaba increased its stake to take majority control in Alibaba Pictures, the film production business it acquired in 2014. Tencent and Baidu have also spent big bucks on content creation. While Tencent zooms in on video games and anime, Baidu’s Netflix-style video site iQiyi has received wide acclaim for house-produced dramas like Yanxi Palace, a smash hit drama about backstabbing concubines that was streamed over 15 billion times.

Seeing all the entertainment options on the table, the Chinese government made a pre-emptive move against the private players by introducing a news app designed for propaganda purposes in the weeks leading to the vacation.

“The timing of the publishing of this app might be linked to the upcoming Chinese New Year Festival, which the Chinese Communist Party sees as an opportunity and a necessity to spread their ideology,” Kristin Shi-Kupfer, director of the research area on public policy and society of German think tank MERICS, told TechCrunch earlier. “[It] may be hoping that people would use the holiday season to take a closer look, but probably also knowing that most people would rather choose other sources to relax, consume and travel.”

A government propaganda app is going viral in China

The article has been updated to correct Kristin Shi-Kupfer’s title.