Bumble, currently Tinder’s biggest rival in the dating app market, today launched its own version of Tinder’s “Boost” feature. On Bumble, it’s being called “Spotlight,” and allows users to pay to bump their profile to the front of the queue in order to be seen by more people than they would otherwise.

Very much like Tinder Boost, the idea here is that getting to the front of the line will allow you to pick up matches more quickly, as you don’t have to wait until users swipe through other profiles before they see yours. Plus, depending on how far in the back of the line you are typically, Spotlight could help you be seen by those who would have never made it to your profile page at all.

Spotlight — or Boost, for that matter — isn’t something every dating app user needs.

Dating apps today organize their queues with profiles based on a number of factors — including things like profile popularity, whether you swipe right on everyone or are more selective, whether your photos are higher quality or blurry and many other signals. If you tend to get matches easily on the apps, you may not need Spotlight. But if you suspect your profile is farther down the line, or just want to make sure your profile is getting seen, the feature could help. 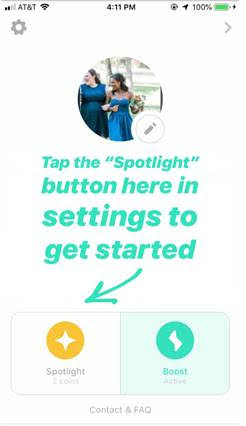 To use Spotlight, Bumble users must pay two Coins (bought through a separate in-app purchase). One coin is $0.99 in the U.S., or £1.99 in the U.K. Spotlight will then show your profile to more users for the next 30 minutes. Your profile is not flagged or labeled in any way, so no one knows you used Spotlight to be promoted. However, the user who purchased Spotlight will know it’s active as they’ll see stars appear across the top part of the Bumble app while it’s enabled.

Spotlight represents another way that Bumble continues to challenges Tinder head-on by rolling out similar features, after already co-opting the swipe-to-like and the super-like, for example.

The move also comes following another successful quarter by Match Group, led by the earnings from its flagship app, Tinder. 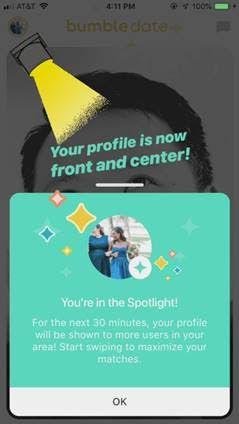 Combined with its other dating app properties, Match pulled in $457 million in revenue, up 21 percent year-over-year, and topping analyst estimates. Tinder reported its paying subscriber base grew to 4.3 million as of year-end, out of a total user base that tops 50 million. (The company doesn’t disclose the number of users it has.)

Spotlight is one of several in-app purchases offered by Bumble, alongside the recently launched option to access more profile filters, for example, as well as free features, like Snooze, which lets you take a digital detox from online dating.

Shortly after Bumble announced the launch of its new feature, Hey Vina – an app for women who want to make friends – announced that Bumble had stolen the concept and name from them. Notably, Tinder has an investment in Vina.

“Vina launched the ‘Spotlight’ feature version of Tinder Boost a month ago,” wrote Hey Vina CEO Olivia June, in an email to TechCrunch. “I just wanted to point this out given that the feature is so similar to ours, that they named it the same as ours, and that Vina (being Tinder’s move in the friendship space) launched before Bumble BFF.”

Bumble and Tinder have been at odds for some time, following Match’s inability to acquire Bumble. The two are involved in lawsuits, and now regularly rip each other off.