Apple announced this morning it has partnered with the U.S. Department of Veterans Affairs (VA) to make the Health Records feature on iPhones available to veterans. The deal will allow veterans to view their medical information across participating institutions, including the VA, organized in the Apple Health app.

These health records include allergies, conditions, immunizations, lab results, medications, procedures and vitals, and will be displayed alongside other information, like Apple Watch data. This gives VA patients a more comprehensive view of their medical history and health data, Apple says.

The medical information is also secured through encryption and protected by the iPhone user’s passcode, Touch ID or Face ID.

Apple was reported to be in discussions with the Department of Veterans Affairs about this deal back in November of last year. At the time, it was said that in addition to the health record integration on iPhones, Apple would provide engineering support to the agency. 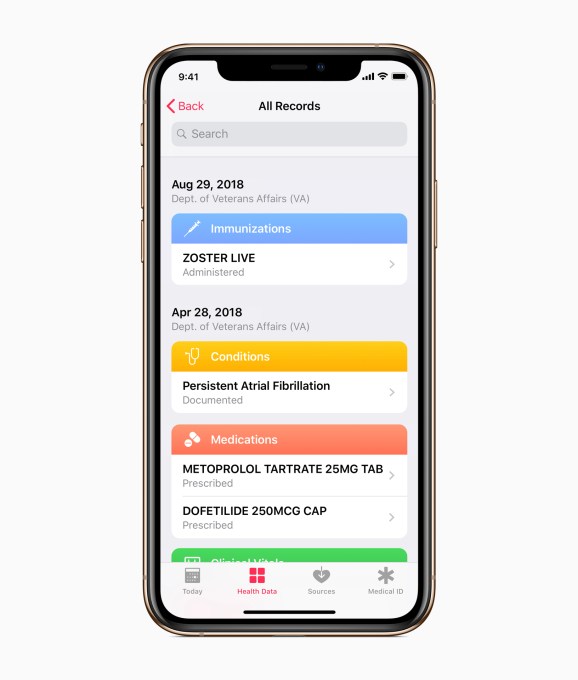 The partnership is a big win for Apple, as it provides the iPhone maker a means of reaching the more than 9 million veterans currently enrolled in the VA’s system across its 1,243 facilities. It also represents another success by the company in terms of getting healthcare institutions to support its Health Records feature on iPhones. Today, that list includes a growing number of hospitals and clinics across the U.S.

The Health Records feature on the iPhone will be the first record-sharing platform like this available to the VA, Apple also noted.

“We have great admiration for veterans, and we’re proud to bring a solution like Health Records on iPhone to the veteran community,” said Tim Cook, Apple CEO, in an announcement about the new partnership. “It’s truly an honor to contribute to the improved healthcare of America’s heroes.”

“When patients have better access to their health information, they have more productive conversations with their physicians,” added Jeff Williams, Apple’s COO. “By bringing Health Records on iPhone to VA patients, we hope veterans will experience improved healthcare that will enhance their lives.”

A number of tech companies over the years have tried to offer platforms for centralizing health records, but have faced challenges because of the fragmentation across the industry, as well as other technical hurdles. Google Health, for example, closed down in 2011 after failing to gain traction. To combat these issues, Apple has been putting together individual deals with various institutions to get them to support the Health app’s Health Records feature, following its January 2018 launch. However, the partnership with the VA is one of Apple’s most significant deals to date.

Apple is not the only major tech company today involved in the healthcare space.