Fitbit has a new fitness tracker, but it’s one that you can’t buy in stores.

The company quietly uncorked the Inspire on Friday, releasing its first product that is available only to corporate employees and health insurance members. The idea is to offer a fully subsidized wearable that helps the company dig deeper into the corporate and business worlds.

The new devices are available as a wristband with the option of a clip. The basic tracker’s features are pretty standard and include activity and sleep tracking, calory burn and alerts from a connected phone. A higher specced model includes heart rate tracking, GPS for fitness tracking and deeper analytics on sleep. No prices are displayed on the website, but eligible customers won’t need to pay.

In an interview with CNBC, CEO James Park said the company has 6.8 million users on wellness programs include Fitbit devices via employers, health plans or hospital programs. In offering the Inspire — which is Fitbit’s cheapest device yet — the goal is to grow that number further still. Indeed, Park said Fitbit is a named covered fitness benefit in 42 Medicare Advantage plans across 27 U.S. states while it is working with insurance firms like UnitedHealth. 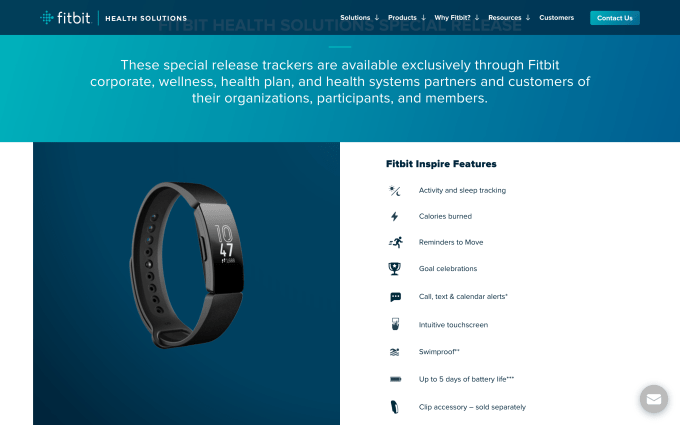 It makes sense that Fitbit is moving into that space because the consumer market is a tough one. Wearables are no longer an early novelty and competition is fierce. Apple dominates at the high end with the Apple Watch — which has doubled down on health features — while, at the cheaper end, companies like Xiaomi and its partner Huami offer basic trackers from as little as $30.

Fitbit went public in 2015. While its share price rallied to $6.48 on Friday on this news, it is still down massively from its list price of $20 and first-day trading close of $29.68. Today the company’s market cap stands at around $1.6 billion.