Opera became the first browser-maker to bundle a VPN with its service, and now that effort is expanding to mobile.

The company announced today that its Android browser app will begin offering a free VPN. The feature will be rolled out to beta users on a gradual basis. The VPN is free and unlimited, and it can be set to locations in America, Europe and Asia as well as an “optimal” setting that hooks up the fastest available connection. Switching on the VPN means that user traffic data isn’t collected by Opera, while it makes it harder for websites to track location and user data.

There are granular settings too, which include limiting VPN usage to private tabs and switching it off for search engines to get more local results.

Opera previously offered a free VPN app for Android and iOS, but that project was closed last year. The new strategy, it seems, was to bake that technology directly into the browser to give it a more competitive advantage and use the tech to bring more users into the Opera ecosystem. There’s no word on an iOS launch.

“The reason why we are including this built-in VPN in our Android browser is because it gives you that extra layer of protection that you are searching for in your daily mobile browsing,” the company — which listed on the Nasdaq last year — said in a blog post. 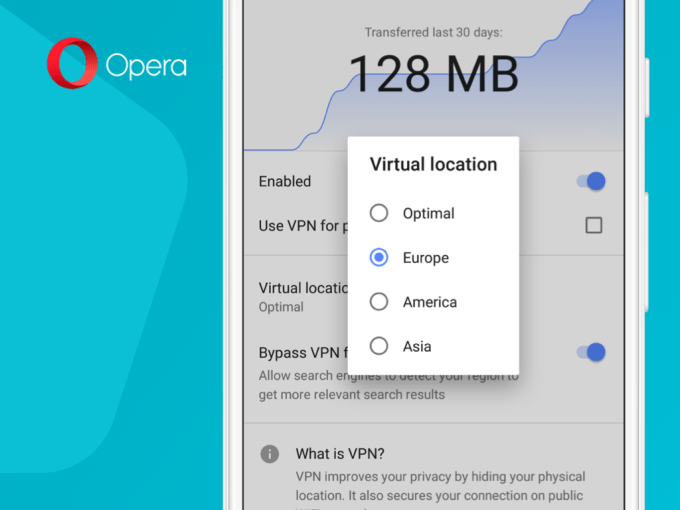 The VPN — which is powered by a 2015 acquisition — is one of a number of privacy features that Opera offers. Others include cookie dialog box blocking, cryptojacking and ad blocking. The company has also offered support for crypto with the addition of a crypto wallet, support for Web 3 apps and — as of this week — a feature that lets users buy crypto from inside their browser.

Besides its core apps, Opera also offers a “Touch” browser that is optimized for devices that don’t have a home button. It launched on Android and expanded to iOS late last year.