Ticketing app Gametime is taking its last-minute approach about as far as it can go, with the launch of a new feature called LastCall. This allows users to purchase tickets through Gametime until 90 minutes after an event has started.

Why would you want to do that? Well, prices usually drop precipitously after the event starts — for example, Gametime said that 48 hours before a game, the median price for a Major League Baseball is (coincidentally?) $48, but it’s dropped to $13 by 90 minutes after the first pitch.

Founder and CEO Brad Griffith acknowledged that most fans probably aren’t interested in just showing up for the fourth quarter or ninth inning of a game, or for the last song in a concert. On the other hand, if you could get a big discount and still catch most of the event, then it might be worth it.

Meanwhile, if you’re a team or a venue with empty seats, or if you’re a ticket-holder who realizes at the last minute that you can’t attend, then it’s good to have one last shot at selling those tickets.

In fact, it sounds like this is one of those “announcements” that’s partly acknowledging what’s already happening, both in the Gametime app and elsewhere. Griffith said the company is “doubling down” on this last-last-minute category of tickets, adding that it’s “constantly working through” what it’s actually including under the LastCall umbrella. 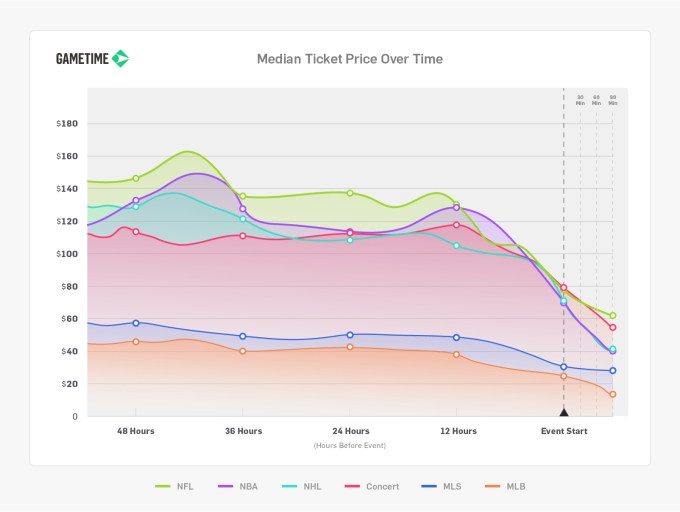 “The key element is the research that we’ve done, how it relates to the growth of this phenomenon” he said.

That research includes a survey of 287 event attendees, some who use Gametime and some who don’t. Apparently 27 percent said they’ve already purchased tickets after an event’s start time, and 62 percent of those late buyers were either Generation Z or millennials.

And while Gametime started out with a focus on sports, LastCall will include tickets from a variety of live events. In fact, Griffith said concerts are now the app’s fastest-growing category, and he suggested that this approach could help with the declining number of total concert tickets sold.

“We’re starting to see a bifurcation of windows, where the on-sale is still healthy, is strong, and the middle is maybe cratering in terms of transaction volume,” he said. “And then last-minute is vibrant and growing fast. That is where we aim to do our best work.”