Weather and climate-related disasters cost the U.S. economy $80 billion last year — and have hit the nation’s bottom line to the tune of roughly $100 billion per year over the last five years, according to a new survey from the National Oceanic and Atmospheric Administration.

That tally comes as NASA reported that 2018 was also the fourth warmest year ever recorded — continuing a trend of record-breaking global temperatures.

It looks like the anthropogenic causes of climate change are becoming harder to ignore.

Indeed, the NOAA’s Climate.gov report was very blunt about the causes of the increasing frequency with which natural disasters are occurring across the country:

The past three years (2016-2018) have been historic, with the annual average number of billion-dollar disasters being more than double the long-term average. The number and cost of disasters are increasing over time due to a combination of increased exposure, vulnerability, and the fact the climate change is increasing the frequency of some types of extremes that lead to billion-dollar disasters.

In total, the U.S. was hit by 14 separate disaster events whose costs were more than $1 billion: the litany of climatological horrors included two tropical cyclones, eight severe storms, two winter storms, prolonged drought and wildfires (that probably burned all the partridges out of their pear trees). 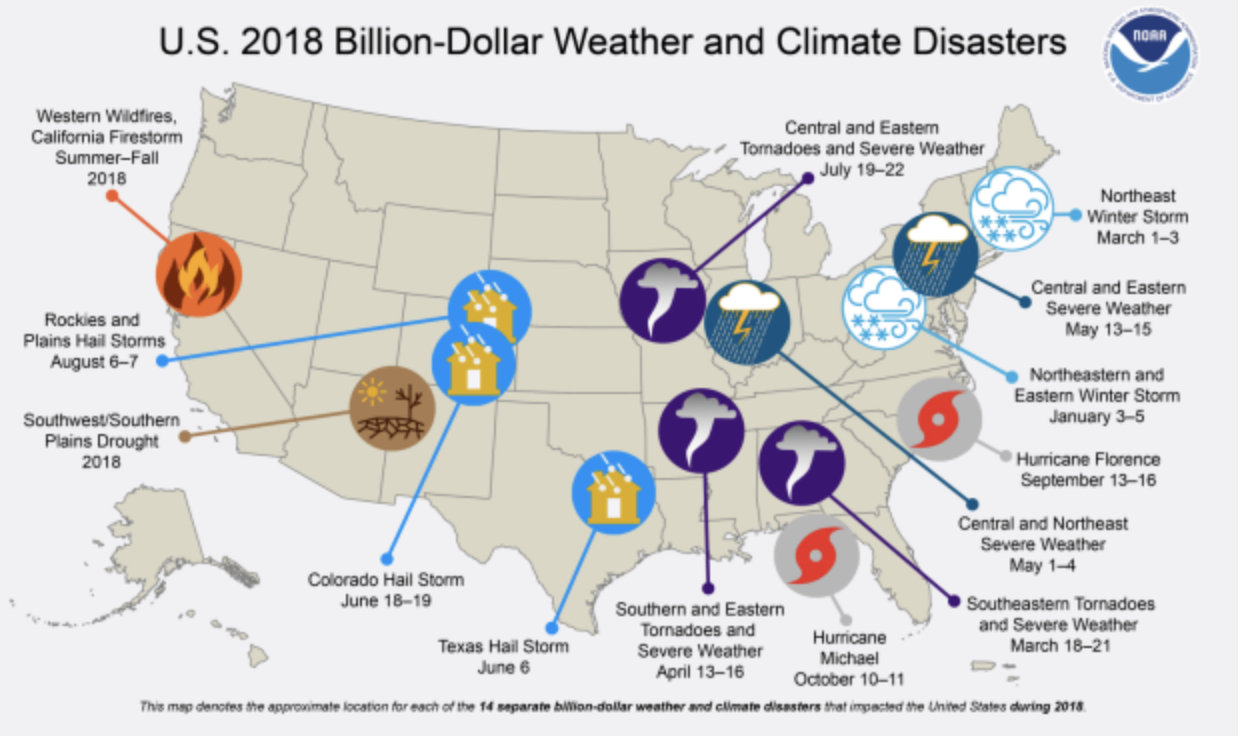 As the NOAA report notes, this tally is the fourth highest number of total events ever recorded — behind 2017 and 2011 (tied at 16 natural disasters) and 2015, which saw 15 natural disasters worth more than $1 billion slam the U.S.

Last year was also one of the costliest for the American economy in terms of the impact from natural disasters. The $80 billion price tag is only topped by 2017, when storms, fires, floods and drought cost the economy $312.7 billion (a record); 2005, when the number hit $220.8 billion and 2012 when $128.6 billion was lost due to climate-related disasters. 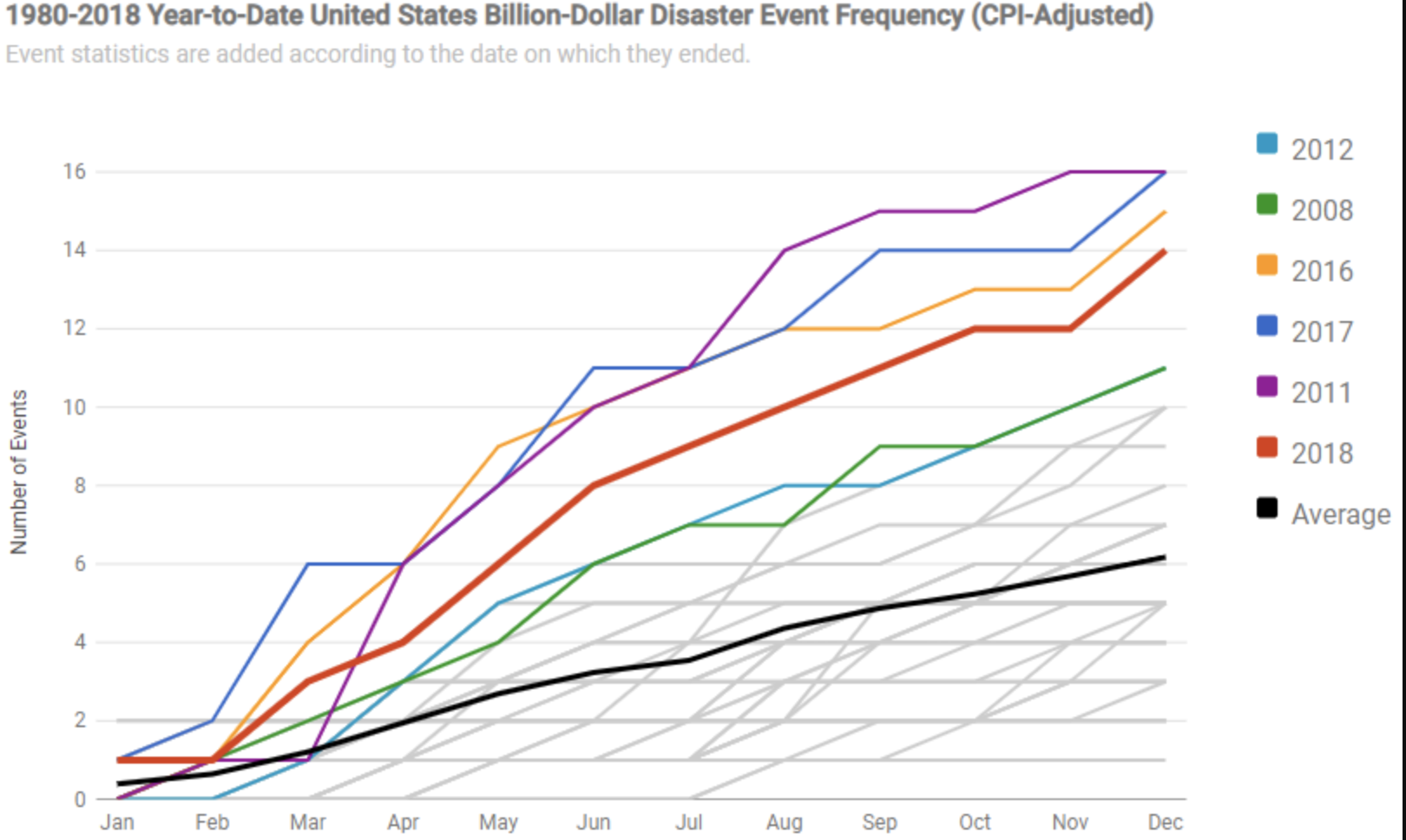 Of the events that are the most damaging and costliest to the U.S. economy, hurricanes rank the highest. And from 2016-2018 the U.S. was impacted by six separate hurricanes that cost the economy more than $1 billion. In all, those disasters wrought some $329.9 billion in economic damage and killed 3,138 people.

While there’s a tragic, historic precedence for the damage caused by hurricanes, the Western wildfire seasons of the past two years are unprecedented in size and scope in modern history. With costs running over $40 billion, the wildfire costs in the U.S. for the last two years are equal to the cost from fires for the previous 37 years combined.

Meanwhile, NASA scientists have said that the past five years have been, collectively, the warmest years in the modern record.

“2018 is yet again an extremely warm year on top of a long-term global warming trend,” said GISS Director Gavin Schmidt, in a statement.

Since the 1880s, the average global surface temperature has risen about 2 degrees Fahrenheit — and this warming is caused in large part by increased emissions into the atmosphere of carbon dioxide and other greenhouse gases, Schmidt said.

“The impacts of long-term global warming are already being felt — in coastal flooding, heat waves, intense precipitation and ecosystem change,” said Schmidt, in a statement.

It’s important to note that overall global warming contributes to drastic shifts in climate patterns and climate change. It doesn’t mean that there won’t be conditions of extreme cold as (ahem) some people seem to think.

In the beautiful Midwest, windchill temperatures are reaching minus 60 degrees, the coldest ever recorded. In coming days, expected to get even colder. People can’t last outside even for minutes. What the hell is going on with Global Waming? Please come back fast, we need you!

There is a plan being proposed by Democrats in the House of Representatives that aims to push the U.S. to rapidly decarbonize its economy in a bid to offset some of the worst effects that are expected should global temperatures continue to rise (and if anyone wants to send that to me, I’d be obliged).

If anyone wants to send me a version of this draft that's circulating I'm at shieber at techcrunch dot com. Would be great to see it. KTHANXBYE cc: @SenMarkey, @AOC https://t.co/BlstRPD78a

Given that most reports put a 12-year time frame around reversing the worst impacts of climate change, and U.S. reports put the potential economic damage of unchecked warming at somewhere close to $500 billion, getting a move on toward possible solutions seems like a good idea. Let’s hope Congress can follow through.