Microsoft’s Build developer conference is returning to Seattle May 6 to 8. This is a bit of a surprise since Microsoft itself leaked May 7 to 9 as Build’s dates last month, after all. But then Google’s announced exactly those dates for its I/O confab and like last year, Microsoft probably had to scramble a bit… and we’ll get back-to-back developer keynotes from Microsoft and Google in early May.

To say that timing is a bit awkward is an understatement, but we’ll be there and do our thing and then fly out to California at night and do it all over again for Google I/O. For developers, this shouldn’t be too much of an issue, though, given that the target audience for both events is quite different. 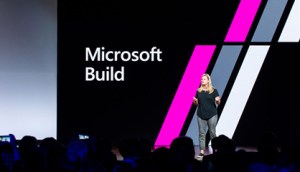 Build is typically Microsoft’s biggest show for developers. Other events, including its massive Ignite show in Orlando, have a stronger emphasis on IT and productivity, but Build is where you can expect announcements around Windows, new developer tools and its Azure cloud, but also updates to how developers can integrate their tools and services into products like Office.

Because Microsoft will likely announce the next version of its HoloLens at MWC in Barcelona in just a few weeks, I think it’s a safe bet that Microsoft will also emphasize its mixed reality platform at Build.