Does your Twitter timeline spark joy? If you’re like most people, probably not. Over the years, you probably politely followed back a few too many Twitter accounts, and now have a timeline filled with all sorts of random tweets from people you can’t even remember following in the first place. A new Twitter tool, Tokimeki Unfollow, may help.

Designed by Julius Tarng, previously of Facebook and Branch, “tokimeki” roughly translates to “spark joy.” It’s a nod to Tarng’s source of inspiration for the new tool — Marie Kondo’s hugely popular Netflix show “Tidying Up.” The series, based on the decluttering expert’s own KonMari method of organization, has prompted many to start purging their homes of unwanted and unloved clothing, books, papers, toys and more in the weeks following the series’ debut.

After all, if anything is a source of clutter these days, it’s the build-up of timeline junk thanks to poor following choices in years past.

Tokimeki Unfollow is easy to use, though its newfound popularity may have it running a little slow at times, we found.

The tool works by using cookies and your browser’s local storage to save its progress. If you opt in, it can save your “keep” and “unfollow” progress secured on the Glitch servers.

The tool also uses your Twitter authentication to pull in your follows, their tweets and to unfollow accounts and help you manage your lists. 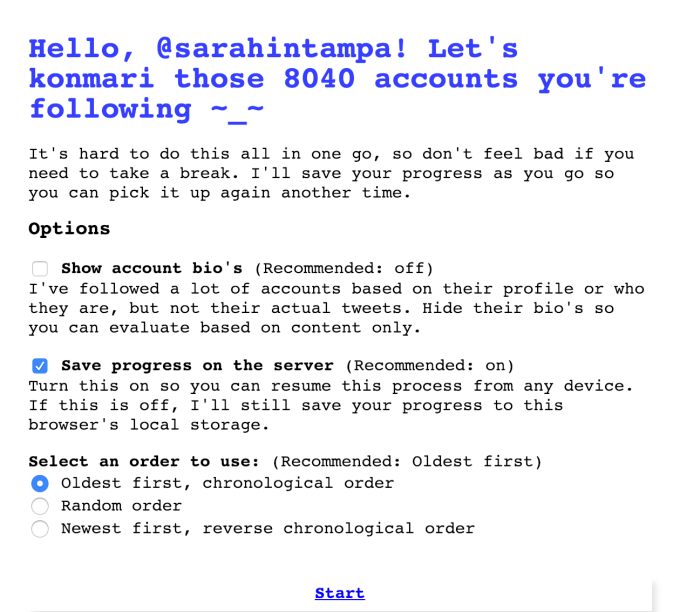 Above: I may never be able to KonMari my way out of this

The tool will ask you which order you want to use to begin the decluttering, with “oldest first” as the recommended default. It suggests that you hide the account’s bio — in case you’re too swayed by who someone is, rather than what they tweet. But you can toggle this setting on or off as you prefer.

Once up-and-running, the tool asks you if the tweets still spark joy or feel important?

You then have to choose to keep following the account or unfollow it. 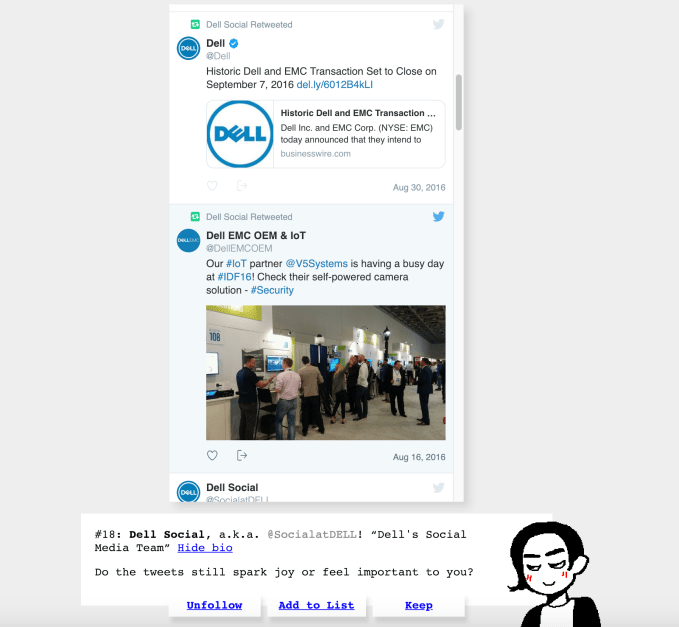 Above: Apparently, there was a time I followed Dell on Twitter

If you unfollow, the tool even reminds you to thank the account for all the tweets you enjoyed before.

You can also organize accounts into lists along the way, which is handy.

List-making is a good middle ground for those times when there are accounts you want to track — like perhaps those with memes or jokes, or those dedicated to favorites celebs, musicians, sports figures and teams, etc. — but don’t want in your main timeline.

Unfortunately, the tool missed pulling in a couple of my lists (perhaps I have too many…), but you can open the Twitter user’s account in a separate tab and add them to a list from there, if need be.

The process of decluttering Twitter this way will take time, but it will also give you the chance to truly consider whose content is worth following.

For those who have been on Twitter from day one, it may be impossible to ever get through the decluttering process this way — but it’s at least a productive time filler.

We asked Tarng to give us more info about the idea behind building Tokimeki Unfollow and how it helps to clean up messy Twitter accounts.

TC: Were you a fan of Marie Kondo and the KonMari method before the Netflix series?

JT: I wouldn’t say “fan” but I had adopted her clothes folding techniques since her book made the rounds a few years ago. The new Netflix show was definitely a reminder, and it was interesting and (at times disappointing) to see American mixed reactions to it!

TC: Have you practiced the method yourself at home?

JT: I actually had always been pretty good about getting rid of stuff since I was young, so KonMari was actually more of a confirmation to me that I wasn’t the only one that thought that way. But I loved the idea of thanking the objects before throwing or donating them away — it’s a very thoughtful way to think about your possessions.

JT: Well, I had just come back to the states after a year abroad and a year off of Twitter. I really missed the human connection, but my feed had become very anxiety-inducing. I saw some joke tweets about KonMari for Twitter, and that was the confirmation for me that I should spend some time building it! Firstly, it was for myself, so some of my personal opinions are in there — like hiding people’s bios so I wouldn’t be swayed by who they were, [and] focusing on the content itself.

TC: How long did it take to build?

JT: I started about three weeks ago. Finished this past weekend. The code is open source on Glitch and you can rewind the history to see the development unfold!

TC: Did anyone help?

JT: I had some guidance from my fiancée and some friends, but I did most of it myself.

TC: What should people know about using this tool?

JT: The tool is more about the process than the end result. Even if people use it for 15 minutes and stop, I hope those 15 minutes help them construct new rules for themselves for who and what type of account to follow in the future. I hope they reflect on how they’ve changed as a person through their follows over the years! I recommend using the “Oldest first” option to really get a look at your past.

TC: The tool has received a lot of attention in the past couple of days (see, for example, Wired, Fortune and Motherboard’s reports, among others). Do you plan to keep working on it or adding more features, as a result?

JT: It is open source so I’m hoping others remix it on Glitch and customize their experience. It is a personal tool that happened to become popular, so I won’t add features I wouldn’t use myself. I still have 600/1,000 to go myself, so however long it takes to go through the rest I’ll tweak it!