Snapchat isn’t growing again, but at least it didn’t hemorrhage any more users in its Q4 earnings report. The company stayed flat at 186 million daily users after falling from 191 million in Q1 to 188 million in Q2 to 186 million in Q3. It exceeded an expected quarterly count of 184.2 million user, though 186 million is still down 0.3 percent year-over-year. It reached record revenue of $390 million in the holiday quarter, up 36 percent year-over-year to beat the $378 million Wall Street estimate, and Snapchat lost just $0.04 per share compared to Wall Street’s $0.08 loss estimate for a beat in Q4 earnings. 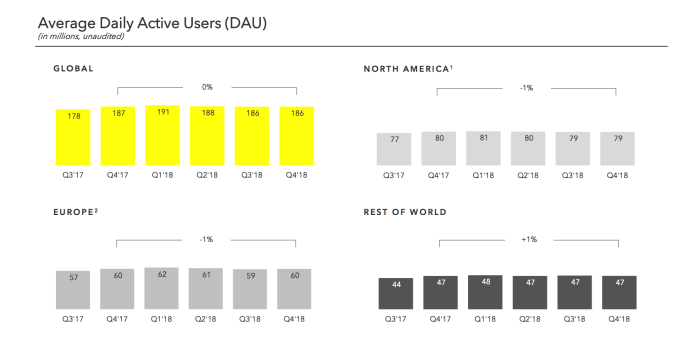 The highlight of the earnings report was that Snap has managed a 68 percent year-over-year improvement in its adjusted EBITDA losses, which came in at $50 million (though net loss was still $158 million). With 43 percent full-year revenue growth in 2018, “This limited our Q4 losses to just 13 percent of our revenue, compared to just one year ago when our Q4 losses totaled more than 50 percent of revenue” CEO Evan Spiegel wrote in his opening remarks. That means Snap might make it to profitability in the next year or two before running out of cash and having to take more from big investors or consider being acquired. 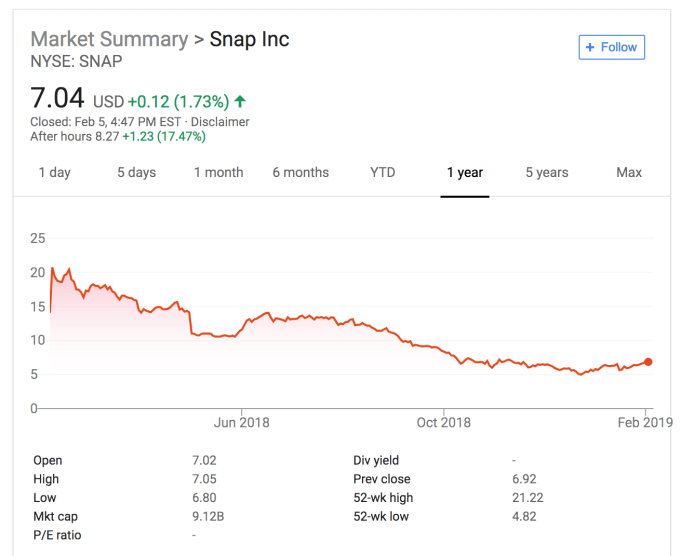 Importantly, Snapchat grew its Europe user count from 59 million to 60 million and stayed flat at 79 million in North America. Since those are its two best monetizing markets, stopping the shrinkage there was critical. That helped spur a 37 percent year-over-year increase in global average revenue per user, and a 30 percent boost over Q3.

Looking forward, Snap expects between $285 million and $310 million in Q1 2019, which would be a 24 percent to 34 percent year-over-year increase, while its adjusted EBITDA losses are expected to be between $165 million and $140 million, down from $218 million in Q1. It ended the year with $1.3 billion in cash and securities.

On the content and engagement front, Snap is reaching 70 percent of total US 13 to 34 year olds with premium mobile video, which could be very lucrate if it can keep its user count stable or growing. 70 precent of users played with or viewed a lens each day, though Snap didn’t provide an update on its Snaps Created Per Day metric that’s useful for judging the health of its messaging feature. But it does say that users still average 30 minutes per day on the app.

30 percent more people are watching its Discover section’s Publisher Stories and Shows every day versus last year, with Snapchat’s new algorithmically personalized Bitmoji Stories seeing 40 million viewers in December. That’s powerful because since Snap makes the content in-house, it doesn’t have to share ad revenue with anyone. 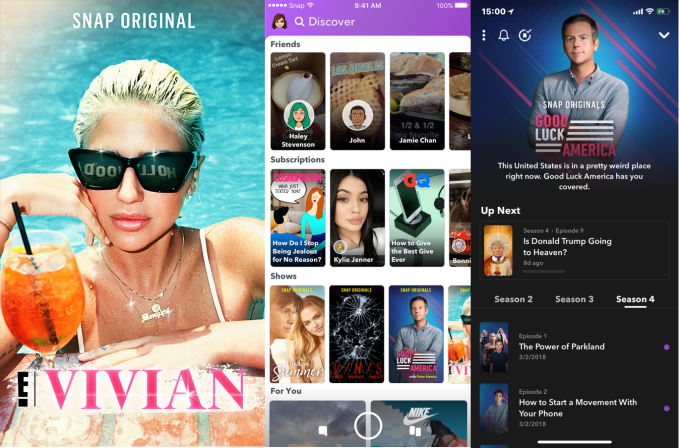 Meanwhile, Snapchat announced it’s finally starting to roll out its Android rebuild to some users, and the initial test results were promising. App startup time was reduced 20 percent, and the improvements could reinvigorate Snapchat for Android’s growth after years of bugs and slow loading dragging down Snapchat’s user count.

Snapchat’s future hinges on its ability to get to profitability so it can keep financing R&D in augmented reality and hardware. Snap won’t be able to keep up with dedicated AR companies like Magic Leap or tech giants like Facebook and Apple if it’s constantly trying to cut costs. It could still be years before fashionable and useful AR eyewear is feasible and Snap must weather the storm until then. The fact that it’s no longer bleeding users and its losses are falling shows great progress in that direction. Most tech giants like Apple and Google end up sitting on their cash, unsure what to invest in. Snapchat seems to have plenty of options if it can just start stockpiling cash instead of spending it all.