While it appears that overall economic activity could be slowing down, one area that continues to soar is the cloud business. Just this week, Amazon and Microsoft reported their cloud numbers as part of their overall earnings reports.

While Azure’s cloud growth was flat from the previous quarter, it still grew a healthy 76 percent. The Intelligent Cloud division overall brought in $9.4 billion in revenue, or a $37.6 billion run rate. Meanwhile AWS, Amazon’s cloud division, grew 46 percent to $7.4 billion, or a $29.6 billion run rate. That’s up from $5.11 billion a year ago. As always, it’s important to remember that it isn’t necessarily an apples to apples comparison, as each company counts what they call cloud revenue a little differently, but it gives you a sense of where this market is going.

Both businesses also face the law of large numbers in terms of growth; that is, the bigger you get, the harder it is to keep growing at a substantial rate. The two companies are doing quite well, though, considering how mature their offerings are.

Last year Synergy Research reported the overall cloud market worldwide grew 32 percent to $250 billion. In Synergy’s last report on cloud market share in October, it had Amazon well in the lead, with around 35 percent and Microsoft around 15 percent. A Canalys report from the same time period had AWS with 32 percent and Microsoft with 17 percent, so close you could call it a tie for statistical purposes.

Alibaba just reported earnings was up 84 percent, but only have a small worldwide market share. IBM, which bought Red Hat for $34 billion last year hoping to grab a bigger piece of the hybrid cloud market, reported cloud revenue was up only 12 percent for 2018 in its earnings report last week, which seems pretty paltry compared to the rest of the market. It’s worth noting that the Red Hat sale won’t close until later this year. Google will be reporting at the beginning of next week, but has not been breaking out cloud revenue recently. It will be interesting to see if that changes. 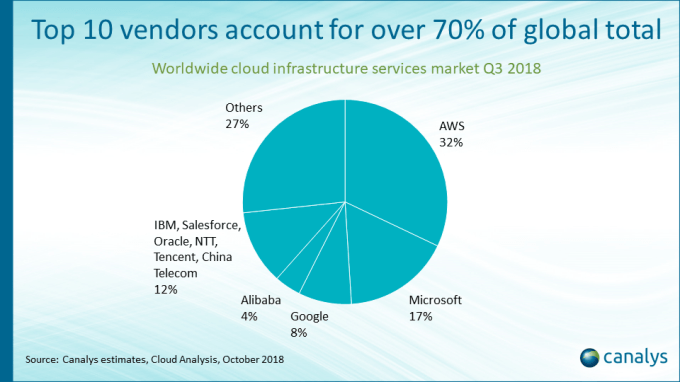 Most experts agree that we are just beginning to scratch the surface of cloud adoption and that the vast majority of workloads are still locked in private data centers around the world. That means even if there is a broader economic downturn in the future, the cloud could be somewhat insulated because companies are already in the process of moving parts of their businesses to the cloud.

As these companies grow, it requires increasing numbers of data centers to deal with all this new business, and a Canalys report found that Microsoft and Amazon have been busy in this regard. Amazon currently has 60 cloud locations worldwide, with another 12 under construction. Canalys reports that the company’s CapEx spending (which includes non-data center spend) reached $26 billion, up a modest 7 percent. Meanwhile Microsoft, which is chasing AWS, had much more aggressive infrastructure spending, with expenditures up 64 percent to $14 billion.

You can expect that unless something drastic happens, the market pie will continue to expand, but the numbers probably won’t change dramatically as these two market leaders have hardened their market positions and it will become increasingly difficult for competitors to catch them.