We’ve written extensively about LG’s struggling mobile business, which has suffered at the hands of aggressive Chinese Android makers, and now that unit has dragged its parent company into posting its first quarterly loss for two years.

The Korean electronics giant is generally in good health — it posted a $2.4 billion profit for 2018 — but its smartphone business’s failings saw it post a loss in Q4 2018, its first quarterly negative since Q4 2016.

We’ve known for some time that LG’s mobile business is struggling — the division got another new head last November — but things went from bad to worse in Q4. LG Mobile saw revenue fall by 42 percent to reach KRW 1.71 trillion, $1.51 billion. The operating loss for the period grew to KRW 322.3 billion, or $289.8 million, from KRW 216.3 billion, $194 million, one year previous.

Over the full year, LG Mobile posted a $700 million loss (KRW 790.1 billion) but the company claimed things are improving thanks to “better material cost controls and overhead efficiencies based on the company’s platform modularization strategy.” 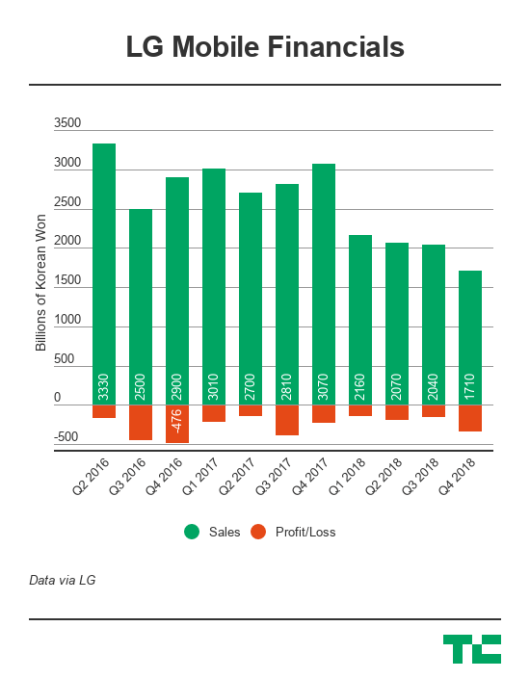 LG used CES to showcase a range of home entertainment products — that division is doing far better than mobile, with a record annual profit of $1.35 billion in 2018 — so we’ll have to wait until Mobile World Congress in February to see exactly what LG has in mind. Already, though, we have a suggestion, and it isn’t exactly set-the-world-on-fire stuff.

“LG’s mobile division will push 5G products and smartphones featuring different form factors while focusing on key markets where the LG brand remains strong,” the company said in a statement.

It will certainly take something very special to turn things around. It seems more likely that LG Mobile head Brian Kwon — who also heads up that hugely profitable home entertainment business — will focus on cutting costs and squeezing out the few sweet spots left. Continued losses, particularly against success from other units, might eventually see LG shutter its mobile business.

Still, things could be worse for LG — it could be HTC.