The second time around, the council promised to explore the tax incentives that made the deal possible, along with the potential impact such a move could have on the city, residents and infrastructure.

Last year, New York was revealed to be one of two cities that would house a second headquarters for the retail giant. The other, Crystal City, North Virginia, approved $750 million in subsidies after a brief debate earlier this week. 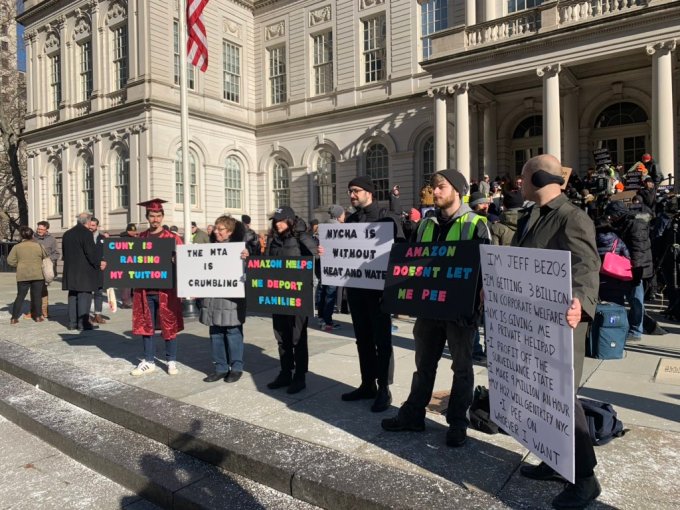 The company has been subject to a larger pushback in New York, where rent prices and infrastructure are already feeling the strain of the city’s 8.6 million residents. Both the company and city officials came under scrutiny for backdoor dealings ahead of the official announcement.

“In this case, the deal was done backwards,” Speaker Corey Johnson said in his opening remarks. “The City and State made a deal with HQ2 in Long Island City and agreed to give away at least $3 billion in public subsidy before they did their due diligence.”

Amazon Vice President of Public Policy Brian Huseman attended the hearing to represent the retail giant’s position. “We believe our new headquarters should provide job opportunities for all New Yorkers,” he hold the Council. “Amazon’s investment in Long Island City will create 25,000 jobs over 10 years with an average salary of more than $150,000.”

Huseman was also quick to cite plans this week to fund high school classes in the city and used the opportunity to announce partnerships with LaGuardia Community College (LAGCC), the City University of New York (CUNY) and the State University of New York (SUNY), which would create a cloud computing certificate program for students. Both serve the clear function of demonstrating Amazon’s commitment to the community while providing a potential pipeline for future employees.

The site chosen for the office space, council members were quick to point out, was previously designated for two public schools, 5,000 units of affordable housing, parks and commercial space.

An upcoming hearing will feature statements from the community. For now, however, those who made it through the chamber doors were asked to sit quietly. The crowd largely heeded the warning, save for a few outbursts and the constant presence of bright orange handbills reading, “Caution: Amazon Lies,” along with a frowning face playing off the company’s familiar “A to Z” logo.

As Huseman delivered his opening remarks, twin black banners were unfurled from the balcony, claiming that “Amazon Delivers Lies” and “Supports Deportation.” Police escorted protesters out, before a third shouted complaints about Amazon’s union policies. He, too, was escorted out, as security issued a warning that any additional outbursts would force the balconies to be cleared. 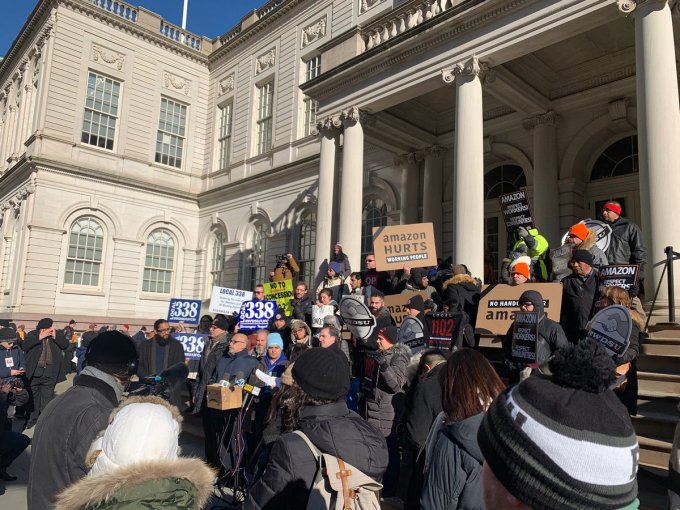 Union policies were a recurring theme throughout. Council member Daniel Dromm declared that “New York is a Union town,” while Deputy Leader Jimmy Van Bremmer shamed the company for an anti-union stance.

Johnson pressed Huseman, asking whether the company would agree to remain neutral with regards to workers unionizing. “No sir,” the executive answered. Pushed whether Amazon’s surveillance technology has been employed by agencies like ICE to deport immigrants, Huseman answered, “We cannot disclose who our customers are without their consent.”

Amazon also conceded that tax incentives were one of several motivating factors in the decision. “Labor was the primary driver,” a representative said. “The cost of doing business was also a driver.”

No date has been announced for the third hearing.