Credit cards are a relatively new invention that have entered into something of an innovation rut. Reward programs seem stale, mobile apps remain mired in early-2000s UX paradigms and, all too often, critical financial decisions (and their expensive associated fees) are hidden like booby-traps for users. Little wonder, then, that consumers are fed up with their credit card providers.

Worse, credit cards are not accessible to millions of people, whether due to a lack of credit history, immigration status or because they are unlikely to be profitable since they often won’t use certain fee-based services.

Credit card issuer Petal wants to change that status quo, and now has another $30 million to do it.

The New York-based startup announced today that it raised a Series B equity round from Valar Ventures, which also led the company’s $13 million Series A round almost exactly a year ago (bringing the company’s total to $46.6 million, including its seed round). Petal had previously announced in October that it raised a $34 million credit facility to power its product. It was founded in 2016 by a quad of founders, including CEO Jason Gross, and currently has 60 employees.

Petal uses a more holistic and comprehensive underwriting model to determine the creditworthiness of credit card applicants compared to traditional banks that rely predominantly on an applicant’s FICO score. The goal is to focus more on cash flows rather than a static score, since that measure provides a more accurate assessment of a potential user’s payback capability. The hope for Petal is that its modern data models will allow more customers to qualify for credit, and for customers who qualify to receive a higher credit line.

After testing its model privately, Petal publicly introduced its Petal credit card product this past October, which is on the Visa network. Among its key features are eliminating many of the fees that credit card issuers have tacked on over the years, including the overdraft fee, late fee, international fee and annual fees. Petal makes money through interest rates and through the transaction fees charged with use.

The company has seen success with customers so far: More than 100,000 potential applicants signed up during the company’s private beta phase, according to Petal, and since then thousands of customers have gotten a Petal card following its public release. 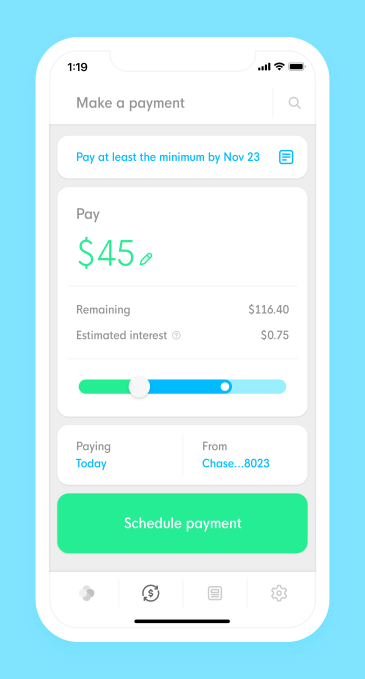 Petal shows options for how to pay a credit card balance, and tries to transparently show the cost of interest when borrowers don’t pay off their whole statement.

Petal’s CEO Gross told me that one of the big goals for this new round of capital was to expand the product to more customers while also offering more features. “The card is really simple, but there is a lot more we want to do over time … and this funding allows us to reach that next level of what we can offer to consumers,” he said. Gross also noted that while there are adjacent opportunities to help consumers around their financial lives, Petal is heads down focused on the credit card market.

Valar Ventures has now led two equity rounds in the company. Gross explained that “the insiders have a lot more information … and they took a look at it and they decided they would rather do it themselves.” Valar has built up an unusually strong consumer fintech portfolio that includes money transfer business TransferWise, smartphone banking service N26, digital investment platform Stash, mobile tax filer Taxfix and paycheck smoothing/budgeting app Even.

Greyhound Capital joins Petal’s cap table as a new investor in this round. Greyhound is focused on fintech, particularly in Europe. Gross said that he thinks bringing European financial innovation to the U.S. will be critical for Petal’s success. “We are hoping to learn a lot about best practices globally,” he said.

Credit cards have been getting more attention from venture investors recently. In addition to Petal’s series of rounds, Brex, a startup based in Silicon Valley that targets the corporate credit card market, has seen a slew of equity rounds, raising $182.1 million, according to Crunchbase.