Few things are easy in our financial system if you don’t have regular employment. It’s hard to prove (regular) income, which makes applying for a credit card or personal loan much more difficult and time-consuming. That’s particularly tough, since freelancer income is variable, and these sort of income-smoothing tools can be critical to make ends meet. Despite those challenges, freelancing is the new normal: If current trends hold true, a majority of the workforce in America could be freelancers within 10 years.

SF-based startup Oxygen hopes to give those freelancers some breathing room in their financial lives. Through a digital banking app and a membership program, the startup offers freelancers simple access to credit that can be pulled down or paid off instantly at any time.

The company has raised $2.3 million in the first close of its seed round from investors including Digital Horizon Capital and Cynthia Chen. It participated in Y Combinator’s accelerator program last summer.

Hussein Ahmed, the founder and CEO of Oxygen, is used to breaking down old institutions and understands the acute pain of freelancers. A single founder originally from Egypt, Ahmed worked as a consultant in the Bay Area after getting his MBA at Berkeley’s Haas School of Business and his PhD in Computer Science at Virginia Tech. “I tried to take a loan out from LendingClub” and they couldn’t verify his income, he explained to me. They then “asked for 10 pages of documentation” because he was a freelancer.

That experience would eventually lead to the core offering of Oxygen, which is efficient and on-going access to a credit line. “When you have this cash flow problem, you can just make one tap,” Ahmed said. “Open the app, take the money out and repay it whenever you can.”

Oxygen is unique in that it doesn’t charge fees for taking out a loan, but instead assesses a monthly membership fee of $29.99 if a user draws down their credit limit. “If you aren’t using the cash reserve then you aren’t paying the monthly fee,” he said. That model seems attractive to at least some freelancers, as Oxygen has seen 80 percent month-over-month growth since its November launch, according to Ahmed.

The company has also taken advantage of some key growth hacks. Oxygen bought advertising on the back of SF Muni buses, which is significantly less visible and popular than advertising on the side of a bus where pedestrians on sidewalks are more likely to see them. Ahmed, though, saw opportunity. We “decided to go for the back of the bus which is 10x cheaper than the side of the bus, but if you are working for Instagram or DoorDash, then you are actually spending your day behind the bus,” he explained. 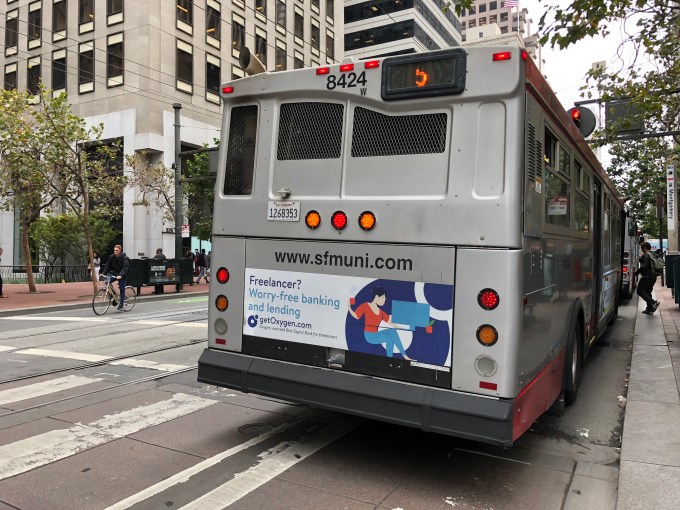 The back of the bus is where the working freelancer looks for ads.