Over the past few years, mattress company Casper has expanded its product lineup to include everything from dog beds to nap pillows. (It’s also opened its own nap store.) The latest addition: the Glow, an $89 light.

While the company has never made this kind of internet-connected hardware before, Chief Strategy Officer Neil Parikh pitched the Glow as part of Casper’s mission to improve sleep. And although there’s already whole categories of sleep-friendly light bulbs and smart lamps, the Glow has a couple of smart touches that could make it particularly appealing.

The basic use of the Glow is pretty straightforward. You turn it on by flipping it over, and it fills your room with warm LED light. The light then dims to darkness over a 45-minute period — as Chief Product Officer Jeff Chapin put it, it’s “mimicking the setting of the sun and it helps you get sleepier as it dims into lower and lower amplitudes.”

You can control and customize the Glow with a smartphone app, but Chapin said, “There are some people who are never going to download the app and that’s fine.” That’s because the Glow can also be controlled by gesture — flipping it to turn it on and off again, twisting it (when it’s set on a flat surface) to adjust the brightness and wiggling it to get a low light. 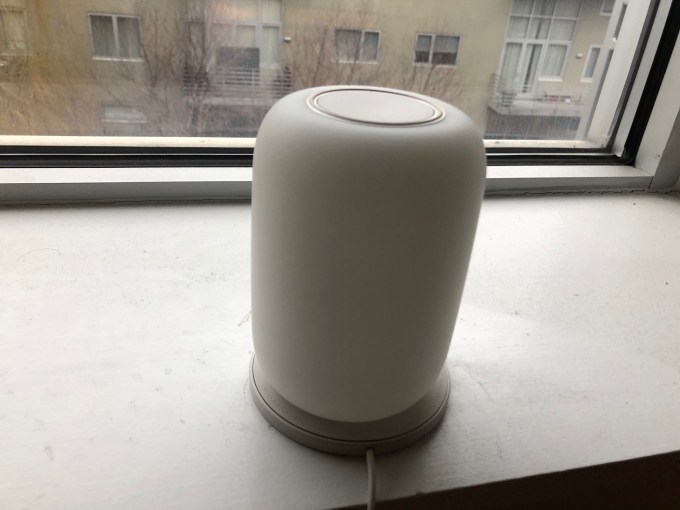 The Glow is also portable, so if you wake up in the middle of the night and need to get a glass of water or use the restroom, you can just pick it up and carry it with you, rather than turning on a bright kitchen light. You can also set a wake-up time so that the Glow gradually lights up again.

“We’ve leveraged the good and the bad of light so that it would help you fall asleep, stay asleep and go back to sleep into the night,” Chapin said.

In fact, if you’re a frequent traveler who struggles with jet lag, you can even “freeze” the settings, pack the Glow in your suitcase and take it with you to your destination, though Chapin admitted, “We don’t know how many people are going to do that.”

In addition to buying a single Glow for $89, you can also get a two-pack for $169. The light comes with a small base for wireless charging.

The Casper team sent me a couple of Glows to try out for myself. I wasn’t able to download the app, but the Glow was indeed largely controllable by gesture. (My only real complaint is that the wiggle-for-dim-light only worked sporadically for me.)

Keep in mind that I didn’t have a particularly sophisticated or sleep-friendly lighting setup before this, and that it’s hard to know how I would have slept on any given night without the Glow. Still, I can say that I found myself getting sleepier as the light dimmed, and I seemed to pass out more quickly and reliably than normal. And since the Glow is pretty small (five inches tall and three inches wide), it was easy to find room for it in my cluttered bedroom, and to carry it around when necessary.

It sounds like Casper has plans for more products that go beyond bedding, addressing broader environmental factors that affect sleep.

“You can expect a lot more from us in the same vein, trying to help people [sleep] across the board, in a multivariate way,” Parikh said. “It’s a very complicated problem.”