Since launch, the startup has been operating out of clinics in New York, San Francisco and Los Angeles. But TechCrunch got the chance to check out Parsley’s new Fifth Avenue location, which marks the company’s first space designed from the ground up as Parsley Health.

Founded by Dr. Robin Berzin, Parsley Health is a healthcare membership, where customers are offered a holistic approach to their health by a team of doctors and health coaches, complete with 24/7 unlimited messaging.

The idea stemmed from the troublesome reality that the average American spends less than 20 minutes a year with their doctor, who more often than not treat symptoms instead of the root problem.

Parsley members spend around four hours/year with medical professionals, including five doctor visits a year and five health coach visits. Plus, Parsley offers 24/7 communication with your doctor and health coach. The hope is that Parsley doctors can better diagnose and treat their patients’ issues if they have the time to get the full story. Plus, Parsley doctors have the benefit of advanced biomarker testing alongside their focus on functional medicine, where root issues are prioritized for treatment rather than symptoms.

Part of giving the highest-quality treatment is creating an open relationship between doctor and patient. That, in many ways, can be influenced by the physical space.

The new Parsley Health Center takes into account the principles of biophilic design. In other words, the space is designed specifically to make people feel healthier and better. The lighting, for example, is built to mimic natural light by using ribbed glass partition systems in the smaller rooms of the space. The space is also full of plants, as being in connection with nature reduces stress and improves mood.

The company even paid attention to the details of designing a main hallway where the halls that sprawl off the main corridor are somewhat hidden by overhanging walls. This pattern, of visually implying a mystery waits around the corner, is supposed to provoke a strong pleasure response.

Beyond the design itself, Parsley also took into account the look and feel of the waiting room.

Rather than a sterile room with old magazines and no light, the Parsley waiting room is more of a communal living room, with plenty of couches and a kitchen, complete with draught kombucha and healthy snacks for purchase.

The hope is that Parsley can use this room for community events around learning how to optimize health across all parts of life, including food, sleep and behavior. 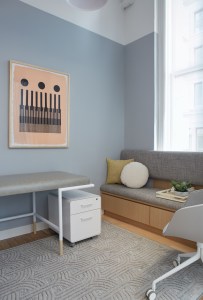 Doctors’ offices and exam rooms are rethought to ensure a more comfortable relationship between doctor and patient. There are no desks that separate patient from doctor, instead featuring a couch with a small side table to write on.

Examination tables have been redesigned to fit in with the room instead of standing out like a giant piece of “medical equipment.” Doctors’ instruments all fit into a small set of drawers off to the side. 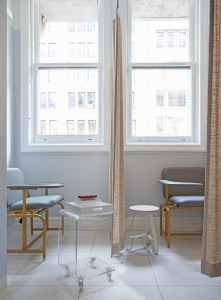 Even the lab is built adjacent to a restroom where patients can pass their specimen through a small compartment in the wall instead of walking it through the hallways.

In 2018, Parsley raised $10 million led by FirstMark Capital, with participation from Amplo, Trail Mix Ventures, Combine and The Chernin Group. Individual investors such as Dr. Mark Hyman, M.D., director of the Cleveland Clinic Center for Functional Medicine; Nat Turner, CEO of Flatiron Health; Neil Parikh, co-founder of Casper; and Dave Gilboa, co-founder of Warby Parker, also invested in the round.