It still has a long way to go before reaching the heights of Netflix (nearly 150 million subscribers) or Spotify (87 million paying subscribers), but the announcement should help put any lingering doubts to rest around whether there’s a sizable audience willing to pay an $8.99 subscription fee for books.

Scribd started as a document-sharing service before moving into the subscription e-book business in 2013, when it signed its first deal with a major publisher — namely, HarperCollins. Since then, the service has added other big publishers and moved beyond older “backlist” titles. In fact, last year HarperCollins released the latest book from “Divergent” author Veronica Roth on Scribd, on launch day.

Chantal Restivo-Alessi has been chief digital officer at HarperCollins for the duration of the Scribd partnership. Via email, she praised the company’s “willingness to monitor, analyze, learn and adjust – something that clearly it has been doing in the past years.”

“We have continued to learn and adapt together,” Restivo-Alessi said. “We expected the digital ebook market to be a bigger part of our and their business now, and we have been positively surprised by the uptake in digital audio. We have continued to calibrate our catalog offer in line with the evolution of Scribd’s platform and customer base. And we continue to be pleasantly surprised by the depth of exposure that the platform provides to our backlist.” 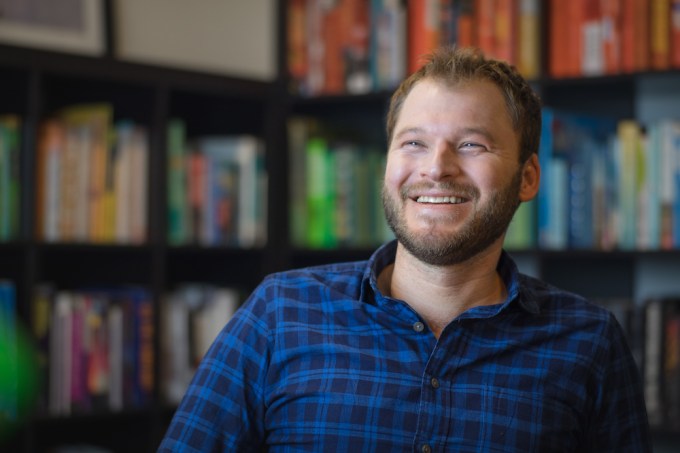 The adjustments to which Restivo-Alessi alludes include Scribd’s pricing model — it initially offered subscribers unlimited access to its library, then capped them at three e-books and one audiobook per month, then went back to a modified version of its unlimited plan last year. (Apparently the most voracious readers and listeners might still encounter a cap.)

Asked whether we can expect the Scribd offering to continue changing, co-founder and CEO Trip Adler said, “I don’t think there will be any big changes. We’re always optimizing … We’re constantly improving the way we find the right balance for readers and for publishers.”

Adler credited audiobooks as a key ingredient to the service’s growth, with engagement growing 100 percent year over year. Surprisingly, he also said Scribd’s old document-sharing business continues to be crucial, because it helps the service attract between 100 million and 200 million visitors each month (mostly from search engines), who can then be converted into paying subscribers.

“That’s kind of the key thing we’ve figured out,” Adler said. “We use the [user-generated content] to attract users and use premium content to retain them.”

Scribd has raised a total of $47.8 million in funding, according to Crunchbase.

Investors include Khosla Ventures, with Khosla’s Keith Rabois on the Scribd board. In an emailed statement, Rabois said, “Scribd has one of the largest libraries of content in the world — which reaches millions of readers every month, giving the company exceptional data and the unique ability to help readers discover content uniquely suited to them. Scribd hitting one million subscribers is just the beginning of Scribd transforming how we choose what books to read and how we read them.”

And now that Scribd has reached the 1 million subscriber milestone, Adler said he’s already thinking about how it can get to 10 million. His plans include further international expansion in markets like Latin America, Europe and India (apparently half of Scribd’s subscriber base is already outside the United States), working with publishers and authors to create original content, and continuing to add new formats.

“We started out by offering documents, then e-books, and then audiobooks, magazines and sheet music,” he said. “We’re just getting started. There’s going to be a lot more new types of content in the coming years.”