Elizabeth Aguilera Contributor
Elizabeth Aguilera is an award-winning multi-media journalist who will cover health and social services for CALmatters. She joins CALmatters from Southern California Public Radio/KPCC 89.3, where she produced stories about community health.

It was way easier for candidate Gavin Newsom to endorse single-payer healthcare coverage for everyone than it is now for Gov. Newsom to deliver it.

Yet hardcore advocates say they’re pleased with the moves he’s made thus far — even if it may take years to come to fruition.

“This is a governor that is operating from a compass of action,” said Stephanie Roberson, government relations director for the politically powerful California Nurses Association, which hasn’t exactly been known for its patience on the issue.

Newsom has taken two tacks. He’s asking the Trump administration to let the state create its own single-payer system offering coverage to all Californians — a move almost everyone regards as a very longshot. And he’s also pushing specific ideas to expand healthcare coverage to hundreds of thousands of still-uninsured Californians — a move that seems much more do-able.

During his campaign, Newsom promised the nurses he would make it happen. But the state can’t do it alone. That’s why he sent a letter to the federal government right out of the gate, asking the administration and Congress to set up an “innovation waiver” to allow California to create its own single-payer system.

Experts say there is little chance the Trump administration will give the state the go-ahead on this.

“He’s making a statement and sometimes making statements is important — even if there’s little chance of making progress in the immediate future,” said Gerald Kominski, senior fellow at the UCLA Center for Health Policy Research. “It’s a way of drawing a line in the sand.”

It’s also a way to stave off criticism from advocates, said Jesus Ramirez-Valles, director of the Health Equity Institute at San Francisco State University. “He can say ‘I tried it’ and there is no risk on him. If he doesn’t do what he promised, then he is risking opposition.”

Federal permission would also require Congress to support a new waiver system — one that would allow the state to redirect funds that usually go to the federal government, such as Medicare income taxes, to a state funding authority that would manage and pay for a single-payer healthcare system, Kominski said. Current waiver systems do not allow for this type of financial management by the state. Other states have used existing waiver programs for permission to set prices or to implement additional requirements, but not to collect federal money. 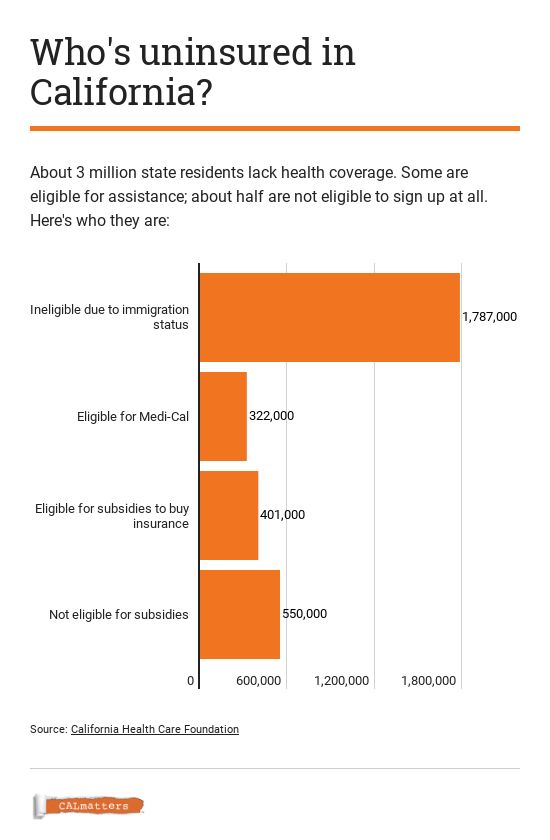 “You have to ask for the money,” said Roberson of the nurses union. “We are not going to sit on our hands and hope something is going to happen. This strengthens the governor’s commitment to Medicare for all.”

Meantime, Newsom is tackling the block of 3 million uninsured California residents by chipping away at the edges — proposing spending to help struggling middle-income families buy health insurance, and providing state coverage to some undocumented young adults.

He’ll need approval from the Legislature, now a supermajority of Democrats, many of whom have supported similar ideas in recent years.

Two intertwined proposals in his budget would offer hundreds of thousands of middle-income families additional state subsidies to buy health insurance, and require every Californian to obtain health coverage or pay a tax penalty.

This “state mandate” would replace the controversial federal mandate — a central component of the Affordable Care Act, or Obamacare — that the Trump administration recently canceled. A few other blue states were quicker to create a replacement state mandate, but California’s progressive lawmakers were wary of penalizing people who failed to buy health insurance unless the state also cushioned the blow by offering people more subsidies to lower the costs.

Newsom also proposes to use $260 million in state funds to extend Medi-Cal, the government health program for people who can’t afford insurance, to low-income undocumented immigrants ages 18 to 26.

It’s a classic “Resistance State” action for Newsom, as California tries to counteract the Trump administration’s federal moves to undermine Obamacare. Last year a joint UCLA and UC Berkeley study found that the uninsured rate in California would rise to nearly 13 percent by 2023 if nothing is done at the state level to prevent it. 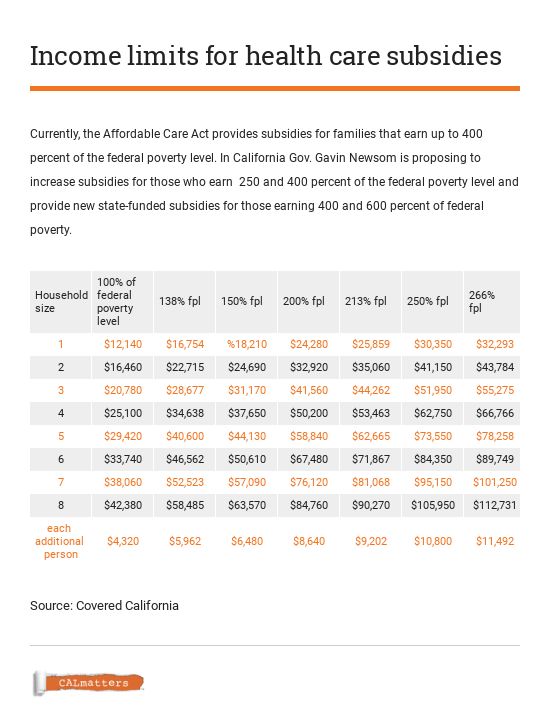 Since the Affordable Care Act, known as Obamacare, was enacted, California’s uninsured rate has dropped from about 17 percent to roughly 7 percent. Roughly half of those 3 million remaining uninsured are undocumented immigrant adults who don’t qualify for assistance.

The budget does not include cost estimates for the additional subsidies, but Newsom intends to pay for the expansion by having the state collect penalties from Californians who forego insurance. His budget proposal estimates that the mandate penalty could raise about $500 million a year, similar to what about 600,000 Californians paid to the federal government when it had a mandate and collected its own penalties.

“Not only does his initiative propose an individual penalty show courage,” he said, “it shows some thoughtfulness about the challenges that middle-class Americans face.”

Enrollment for Covered California, which recently ended, was down 15 percent over last year. Lee said the elimination of the federal penalty is partly to blame. 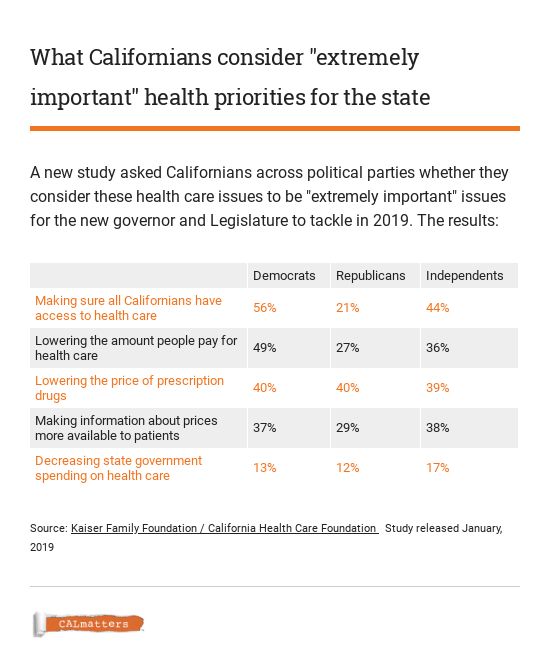 A draft affordability report Covered California is preparing for the Legislature concludes that if Newsom’s two proposals — expanded subsidies and a mandate — are adopted, enrollment could rise by nearly 650,000 people.

Funding the subsidies with penalties is, of course, a bit of a Catch 22: The more successful California is in getting people to obtain healthcare, the smaller the penalty fund to pay for the subsidies that help fund that care.

“You’re accomplishing your goal, but you’re taking away revenue,” Kominski said. “This is the kind of problem we should be happy to have.”

The conundrum is reminiscent of the state’s tobacco tax, which was intended to deter people from smoking. Success has meant a drop in the amount of money the tax brings in.

Despite what many see as dismal prospects for single-payer in California so long as the Trump administration can quash the state’s waiver request, the California Nurses Association is undaunted. They’re working on a soon-to-be-introduced single-payer bill, more detailed than the version that died in 2017. That one carried a $400 billion price tag, more than three times the state’s annual budget, but lacked support from then-Gov. Jerry Brown and was scant on details. The new version, nurses union rep Roberson said, will be specific about how single-payer would work and how it would be paid for.

“We’re not eradicating providers, we are not seeking to dismantle hospitals,” she said. “The fundamental structure of healthcare delivery will stay in place; what we are changing is how healthcare is financed.”

And if the Trump administration rejects the waiver request? Roberson sees other paths to a state single-payer system, including petitioning the Centers for Medicare and Medicaid, or trying to set up a system under Affordable Care Act provisions.

If the nurses union and other single-payer advocates end up pursuing those other avenues, the question becomes whether Newsom will as well.