Confluent, the commercial company built on top of the open-source Apache Kafka project, announced a $125 million Series D round this morning on an enormous $2.5 billion valuation.

The round was led by existing investor Sequoia Capital, with participation from Index Ventures and Benchmark, which also participated in previous rounds. Today’s investment brings the total raised to $206 million, according to the company.

The valuation soared from the previous round when the company was valued at $500 million. What’s more, the company’s bookings have scaled along with the valuation. 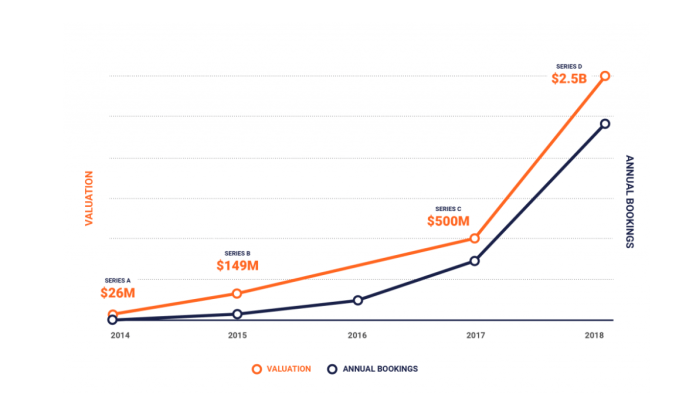 While CEO Jay Kreps wouldn’t comment directly on a future IPO, he hinted that it is something the company is looking to do at some point. “With our growth and momentum so far, and with the latest funding, we are in a very good position to and have a desire to build a strong, independent company,” Kreps told TechCrunch.

Confluent and Kafka have developed a streaming data technology that processes massive amounts of information in real time, something that comes in handy in today’s data-intensive environment. The base streaming database technology was developed at LinkedIn as a means of moving massive amounts of messages. The company decided to open-source that technology in 2011, and Confluent launched as the commercial arm in 2014.

Kreps, writing in a company blog post announcing the funding, said that the events concept encompasses the basic building blocks of businesses. “These events are the orders, sales and customer experiences, that constitute the operation of the business. Databases have long helped to store the current state of the world, but we think this is only half of the story. What is missing are the continually flowing stream of events that represents everything happening in a company, and that can act as the lifeblood of its operation,” he wrote.

Kreps pointed out that as an open-source project, Confluent depends on the community. “This is not something we’re doing alone. Apache Kafka has a massive community of contributors of which we’re just one part,” he wrote.

While the base open-source component remains available for free download, it doesn’t include the additional tooling the company has built to make it easier for enterprises to use Kafka. Recent additions include a managed cloud version of the product and a marketplace, Confluent Hub, for sharing extensions to the platform.

As we watch the company’s valuation soar, it does so against a backdrop of other companies based on open source selling for big bucks in 2018, including IBM buying Red Hat for $34 billion in October and Salesforce acquiring MuleSoft in June for $6.5 billion.