Google’s strategy around its consumer messaging services remains baffling, especially since it killed off Allo (yet kept Duo on life support). Today, the company clarified the timeline of the transition from classic Hangouts to Chat and Meet for its paying G Suite customers. For them, the Hangouts retirement party will start in October of this year. 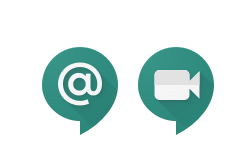 For consumers, the situation remains unclear, but Google says there will be free versions of Chat and Meet that will become available “following the transition of G Suite customers.” As of now, there is no timeline, so for all we know, Hangouts will remain up and running into 2020.

As for G Suite users, Google says it will start bringing more features from classic Hangouts to Chat between April and September. Those include integration with Gmail, the ability to talk to external users, improved video calling and making calls with Google Voice.

Google originally started migrating Hangouts users to the Meet video conferencing service last year. The story there was pretty straightforward, though, given that Meet was a new service with new functionality. For Hangouts, the story is far more complicated, and Hangouts Chat isn’t currently available to consumers. They do have the choice between dozens of other messaging apps, though, and all of this confusion is likely to cost Google quite a few users.

Google is killing off Allo, its latest messaging app flop