How do you do, fellow kids? After Facebook Watch, Lasso and IGTV failed to become hits with teens, the company has been quietly developing another youthful video product. Multiple sources confirm that Facebook has spent months building LOL, a special feed of funny videos and GIF-like clips. It’s divided into categories like “For You,” “Animals,” “Fails,” “Pranks” and more with content pulled from News Feed posts by top meme Pages on Facebook. LOL is currently in private beta with around 100 high school students who signed non-disclosure agreements with parental consent to do focus groups and one-on-one testing with Facebook staff. 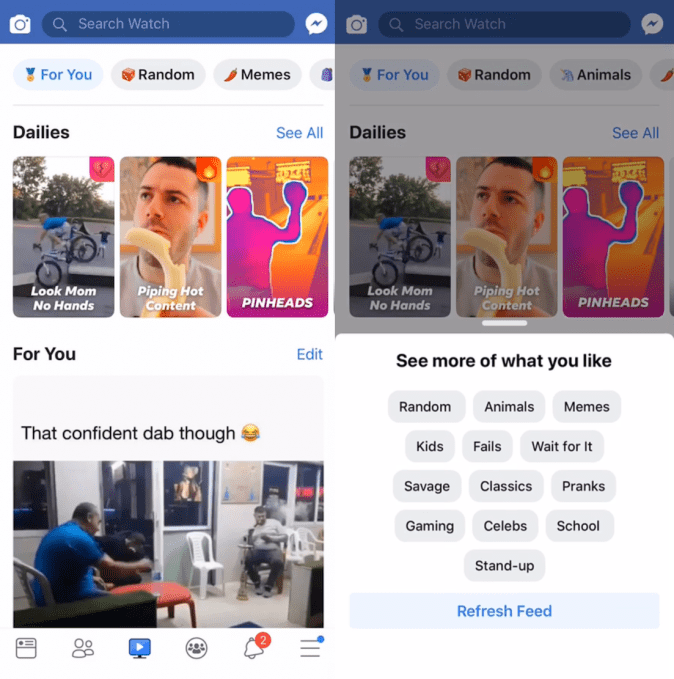 In response to TechCrunch’s questioning, Facebook confirmed it is privately testing LOL as a home for funny meme content with a very small number of U.S. users. While those testers experience LOL as a replacement for their Watch tab, Facebook says there’s no plans to roll out LOL in Watch and the team is still finalizing whether it will become a separate feature in one of Facebook’s main app or a standalone app. Facebook initially declined to give a formal statement but told us the details we had were accurate. A Facebook spokesperson later provided an official statement: “We are running a small scale test and the concept is in the early stages right now.”

[Update 2/7/19: Facebook confirms to TechCrunch that it will cease development in LOL as it prioritizes building other teen-focused features. A Facebook spokesperson provided this statement: “The Youth team has restructured in order to match top business priorities, including increasing our investment in Messenger Kids.” The changes were first reported by Kurt Wagner at Recode.] 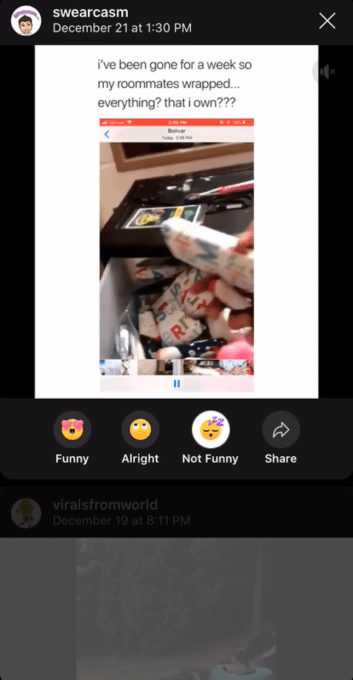 With teens increasingly turning to ephemeral Stories for sharing and content consumption, Facebook is desperate to lure them back to its easily-monetizable feeds. Collecting the funniest News Feed posts and concentrating them in a dedicated place could appeal to kids seeking rapid-fire lightweight entertainment. LOL could also soak up some of the “low-quality” videos Facebook scrubbed out of the News Feed a year ago in hopes of decreasing zombie-like passive viewing that can hurt people’s well-being.

But our sources familiar with LOL’s design said it still feels “cringey”, like Facebook is futilely pretending to be young and hip. The content found in LOL is sometimes weeks old, so meme-obsessed teens may have seen it before. After years of parents overrunning Facebook, teens have grown skeptical of the app and many have fled for Instagram, Snapchat, and YouTube. Parachuting into the memespehere may come off as inauthentic posing and Facebook could find it difficult to build a young fanbase for LOL.

In one of the recent designs for LOL, screenshots attained by TechCrunch show users are greeted with a carousel of themed collections called “Dailies” like “Look Mom No Hands” in a design reminiscent of Snapchat’s Discover section. Below that there’s a feed of algorithmically curated “For You” clips. Users can filter the LOL feed to show categories like “Wait For It”, “Savage”, “Classics”, “Gaming”, “Celebs”, “School”, and “Stand-Up”, or tap buttons atop the screen to see dedicated sub-feeds for these topics.

Once users open a Dailies collection or start scrolling the feed, it turns into a black-bordered theater mode that auto-advances after you finish a video clip for lean-back consumption. Facebook cuts each video clip up into sections several seconds long that users can fast-forward through with a tap like they’re watching a long Instagram Story. Below each piece of content is a set of special LOL reaction buttons for “Funny”, “Alright”, and “Not Funny”. There’s also a share button on each piece of content, plus users can upload videos or paste in a URL to submit videos to LOL.

Facebook has repeatedly failed to capture the hearts of teens with Snapchat clones like Poke and Slingshot, standalone apps like Lifestage, and acquisitions like TBH. Fears that it’s losing the demographic or that the shift driven by the youth from feeds to Stories that Facebook has less experience monetizing have caused massive drops in the company’s share price over the years. If Facebook can’t fill in this age gap, the next generation of younger users might sidestep the social network too, which could lead to huge downstream problems for growth and revenue. 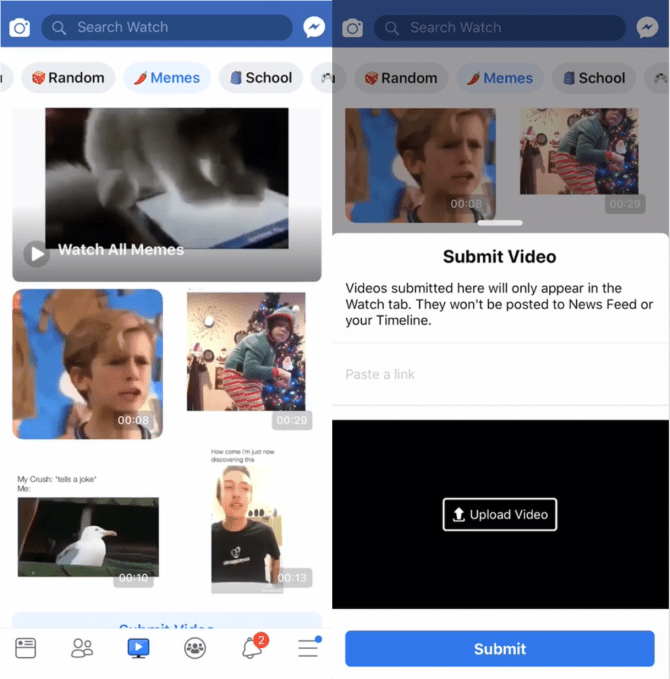 That’s why Facebook won’t give up on teens, even despite embarrassing stumbles. Its new Tik Tok clone Lasso saw only 10,000 downloads in the first 12 days. Despite seeming like a ghost town, Facebook still updated it with a retweet-like Relasso and camera uploads today. Unlike the Tik Tok-dominated musical video space, though, the meme sharing universe is much more fragmented and there’s a better chance for Facebook to barge in.

Teens discover memes on Reddit, Twitter, Instagram, and exchange them in DMs. Beyond Imgur that encompasses lots of visual storytelling styles, there’s no super-popular dedicated meme discovery app. Instagram is probably already the leader, with tons of users following meme accounts to get fresh daily dumps of jokes. Facebook might have more luck if it built meme creation tools and a dedicated viewing hub in Explore or a second Stories tray within Instagram. As is, it mostly ignores meme culture while occasionally shutting down curators’ accounts.

Facebook might seem out of touch, but the fact that it’s even trying to build a meme browser shows it recognizes the opportunity here. Sometimes our brains need a break and we want quick hits of entertainment that don’t require too much thought, commitment, or attention span. As Facebook tries to become more meaningful, LOL could save room for meaningless fun. 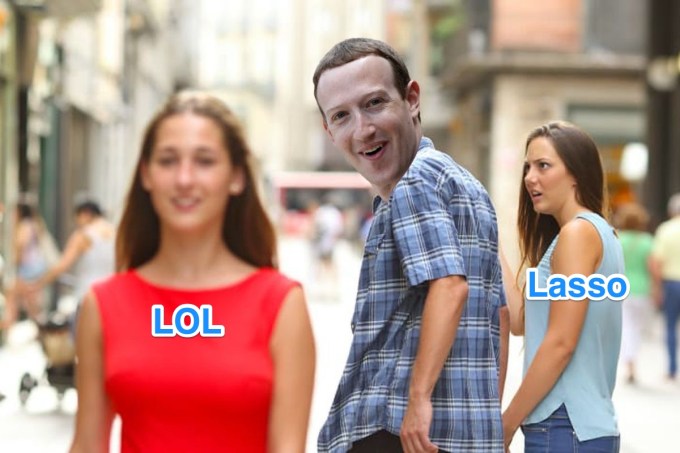