According to the latest data from Stackalytics, a project founded by Mirantis and hosted by the OpenStack Foundation that visualizes a company’s contribution to open-source projects, Google remains the dominant force in the CNCF open-source ecosystem. Indeed, according to this data, Google is responsible for almost 53 percent of all code commits to CNCF projects. Red Hat, the second biggest contributor, is far behind, with 7.4 percent.

The CNCF is the home of Kubernetes, the extremely popular container orchestration service that Google open sourced, so the fact that Google is the top contributor may not seem like a major surprise. But according to this data, Google would still be the top code contributor to all CNCF projects without even taking Kubernetes into account. In part, that’s due to the fact that Google is also the major contributor to GRPC, a queuing project the company donated to the CNCF, and Vitess, the database clustering system it developed for YouTube.

There are still quite a few projects where Google isn’t the main contributor; 64 percent of contributions to Jaeger come from Uber, for example, and 84 percent of LinkerD code commits are from Buoyant engineers. What’s interesting here is that the report found there is only one project where there isn’t a vendor who contributes more than 40 percent, and that’s the Prometheus monitoring solution that was contributed to the CNCF by SoundCloud but which is now mostly maintained by independent developers Red Hat. 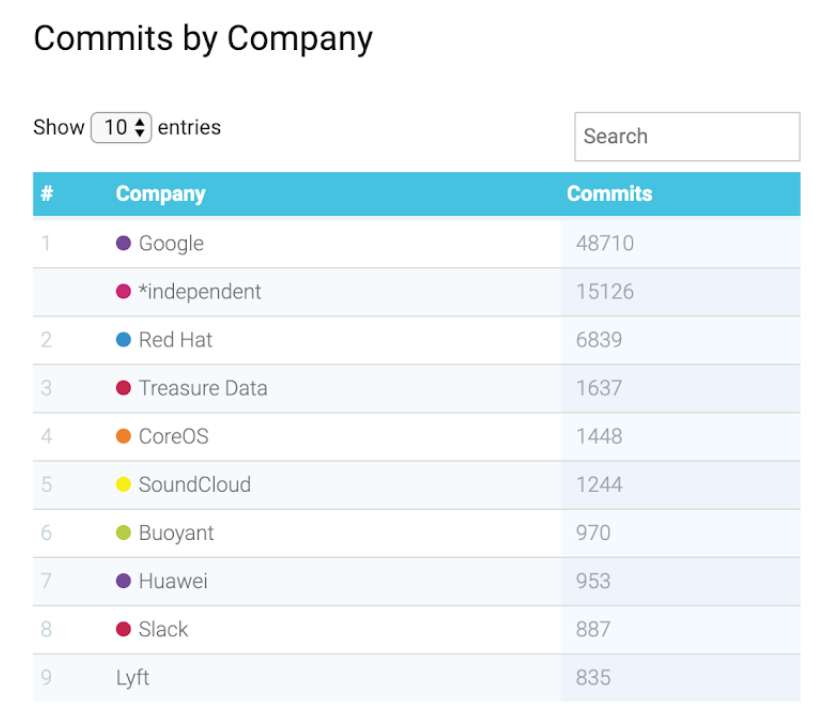 You may read those stats and argue that Google may be a bit too dominant a player in the CNCF ecosystem. Google, of course, doesn’t think so.

“Google has a long history of contribution to and respect for, contribution to open-source software. We love to give back,” said Aparna Sinha, Group Product Manager for GKE and Kubernetes, Google Cloud. “One top of mind example is Kubernetes, one of the fastest growing projects in the history of open source, and today has a thriving community and widespread industry support. Google has been at the heart of it all, as a constant driving force in the community and the broader CNCF. A key part of that momentum has been driven by Google’s deep commitment to the project’s success, whether it’s through providing extensive engineering expertise, code contribution and compute resources, or through project management, testing and documentation. We’re just as dedicated to the project as ever, and we’re excited to see the broader Kubernetes community begin to shape the project’s future and ensure its long-term success.”

It’s worth noting that the CNCF also publishes its own data through its DevStats tool, which tells a similar story, even though it doesn’t quite highlight Google’s dominance as a contributor. When I asked Mirantis co-founder and CMO Boris Renski about these discrepancies, he noted that Stackalytics focuses on commits, whereas the CNCF’s tool looks at contributions, which includes reviews, comments and created issues, among other things. Stackalytics also doesn’t take the CNCF’s sandbox projects into account, where Red Hat contributes quite a bit. The two tools also handle attributions differently, with DevStats attributing all former contributions from CoreOS to Red Hat after it was acquired by the company.

On Twitter, Renski suggested that the different organizations should merge their different data sources to do away with these discrepancies, but I’m not sure how well the CNCF and the OpenStack Foundation really play together these days.