Dolby is secretly building a mobile music production app it hopes will seduce SoundCloud rappers and other musicians. Codenamed “234” and formerly tested under the name Dolby Live, the free app measures background noise before you record and then nullifies it. Users can also buy “packs” of audio effects to augment their sounds with EQs settings like “Amped, Bright, Lyric, Thump, Deep, or Natural”. Recordings can then be exported, shared to Dolby’s own audio social network, or uploaded directly to SoundCloud through a built-in integration.

You could call it VSCO or Instagram for SoundCloud. 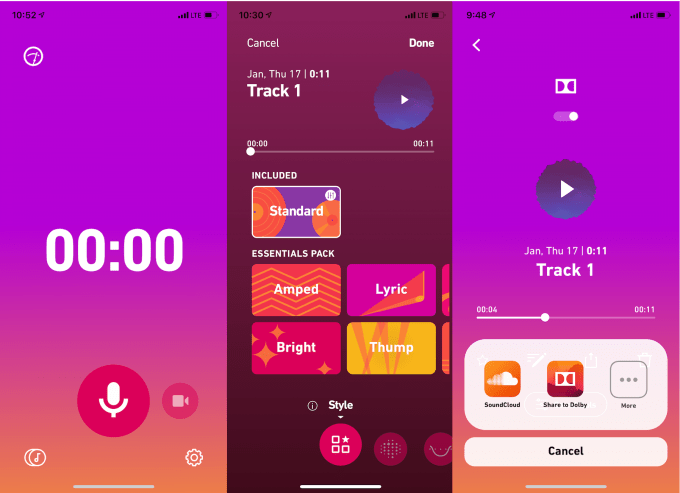 234 is Dolby Labs’ first big entrance into the world of social apps that could give it more face time with consumers than its core business of integrating audio technology into devices by other manufacturers. Using 234 to convince musicians that Dolby is an expert at audio quality could get them buying more of those speakers and headphones. And by selling audio effect packs, the app could earn the company money directly while making the world of mobile music sound better.

Dolby has been covertly testing Dolby Live/234 since at least June. A source tipped us off to the app and while the company hasn’t formally announced it, there is a website for signing up to test Dolby 234. [Update: Dolby has deactivated the signup link in the wake of our article.] Dolby PR refused to comment on the forthcoming app. But 234’s sign-up site advertises it saying “How can music recorded on a phone sound so good? Dolby 234 automatically cleans up the sound, gives it tone and space, and finds the ideal loudness. it’s like having your own producer in your phone.”

Those with access to the Dolby 234 app can quickly record audio or audio/video clips with optional background noise cancelling. Free sound editing tools including trimming, loudness boost, and bass and treble controls. Users can get a seven-day free trial of the Dolby’s “Essentials” pack of EQ presets like ‘Bright’ before having to pay, though the pack was free in the beta version so we’re not sure how much it will cost. The “Tracks” tab lets you edit or share any of the clips you’ve recorded.

Overall, the app is polished and intuitive with a lively feel thanks to the Instagram logo-style purple/orange gradient color scheme. The audio effects have a powerful impact on the sound without being gimmicky or overbearing. There’s plenty of room for additional features, though, like multi-tracking, a metronome, or built-in drum beats. 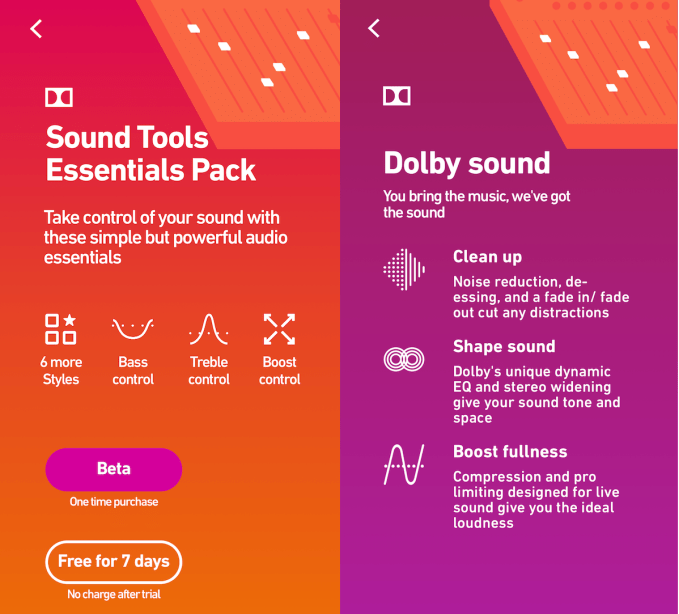 For musicians posting mobile clips to Instagram or other social apps, 234 could make them sound way better without much work. There’s also a huge opportunity for Dolby to court podcasters and other non-music audio creators. I’d love a way to turn effects on and off mid-recording so I could add the feeling of an intimate whisper or echoey ampitheater to emphasize certain words or phrases.

Given how different 234 is from Dolby’s traditional back-end sound processing technologies, it’s done a solid job with design and the app could still get more bells and whistles before an official launch. It’s a creative move for the brand and one that recognizes the seismic shifts facing audio production and distribution. As always-in earbuds like Apple’s AirPods and voice interfaces like Alexa proliferate, short-form audio content will become more accessible and popular. Dolby could spare the world from having to suffer through amazing creators muffled by crappy recordings.