What do you get when you put one internet-connected device on top of another? A little more control than you otherwise would in the case of Alias the “teachable ‘parasite'” — an IoT project smart speaker topper made by two designers, Bjørn Karmann and Tore Knudsen.

The Raspberry Pi-powered, fungus-inspired blob’s mission is to whisper sweet nonsense into Amazon Alexa’s (or Google Home’s) always-on ear so it can’t accidentally snoop on your home.

Alias will only stop feeding noise into its host’s speakers when it hears its own wake command — which can be whatever you like.

The middleman IoT device has its own local neural network, allowing its owner to christen it with a name (or sound) of their choosing via a training interface in a companion app.

The open-source TensorFlow library was used for building the name training component.

So instead of having to say “Alexa” or “Ok Google” to talk to a commercial smart speaker — and thus being stuck parroting a big tech brand name in your own home, not to mention being saddled with a device that’s always vulnerable to vocal pranks (and worse: accidental wiretapping) — you get to control what the wake word is, thereby taking back a modicum of control over a natively privacy-hostile technology.

This means you could rename Alexa “Bezosallseeingeye,” or refer to your Google Home as “Carelesswhispers.” Whatever floats your boat.

Once Alias hears its custom wake command it will stop feeding noise into the host speaker — enabling the underlying smart assistant to hear and respond to commands as normal. 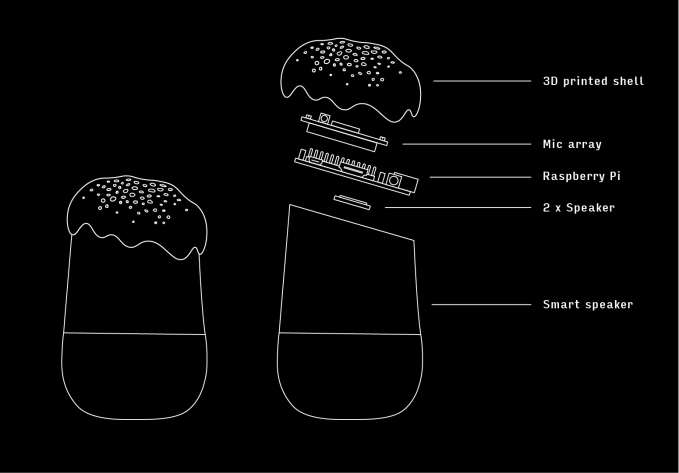 “We looked at how cordyceps fungus and viruses can appropriate and control insects to fulfill their own agendas and were inspired to create our own parasite for smart home systems,” explain Karmann and Knudsen in a write-up of the project here. “Therefore we started Project Alias to demonstrate how maker-culture can be used to redefine our relationship with smart home technologies, by delegating more power from the designers to the end users of the products.”

And if you’re wondering how you’ll know when the microphone is safety being blocked again after you’ve been chatting to the voice assistant, Karmann told us: “Because of the new continuous conversion features in Alexa and Google, there is a built in time frame of 30 seconds before Alias goes back to blocking the microphones again. Inside the shell a bright LED lights up as soon as the assistant has been activated, as well on the app to give immediate feedback.”

While an IoT privacy shield is the immediate use-case for Alias, Karmann also envisages users being able to use the device to create other vocal shortcuts — and establish a more collegiate and cosy relationship with the underlying tech.

“Since Alias is essentially a man-in-the-middle device, it could say more that just the wake word. We could imagine users writing their own responses and shortcuts. For example: Say the word “Weather” and Alias could trigger the assistant and ask it about the today’s weather forecast,” he suggests.

Alias offers a glimpse of a richly creative and personalized future for IoT, as the means of producing custom but still powerful connected technology products becomes more affordable and accessible.

And so also perhaps a partial answer to IoT’s privacy problem, for those who don’t want to abstain entirely. (Albeit, on the security front, more custom and controllable IoT does increase the hackable surface area — so that’s another element to bear in mind; more custom controls for greater privacy does not necessarily mesh with robust device security.)

“We both would never had bought a smart speaker in the first place. But since Bjørn had received a developer device, he was curious and saw it as an opportunity for research, eventually leading to frustration and a bright idea. Today I am happily using a completely renamed Google Home with the name “Marvin”,” adds Karmann.

If you’re hankering after your own Alexa-disrupting blob-topper, the pair have uploaded a build guide to Instructables and put the source code on GitHub. So fill yer boots. 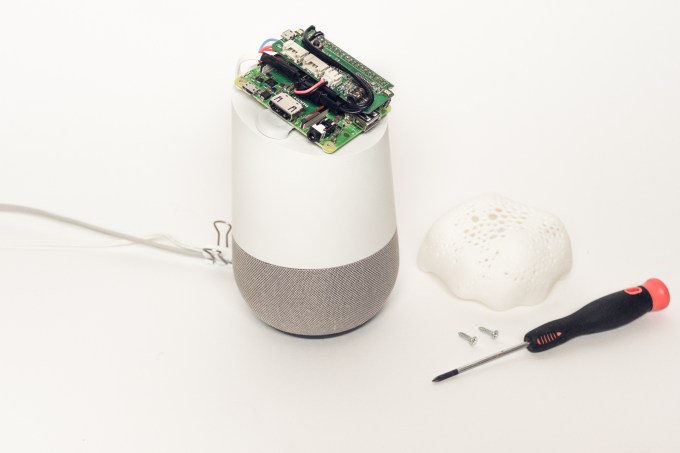 Project Alias is of course not a solution to the underlying tracking problem of smart assistants — which harvest insights gleaned from voice commands to further flesh out interest profiles of users, including for ad targeting purposes.

That would require either proper privacy regulation or, er, a new kind of software virus that infiltrates the host system and prevents it from accessing user data. And — unlike this creative physical IoT add-on — that kind of tech would not be at all legal.

This report was updated with comment from Alias’ co-designer