In a blog post, the Wavy team confirmed they’ll be joining the Ubiquity6 team and won’t be continuing their work on the Wavy app. “When we met the team at Ubiquity6, it became apparent that joining the team there would be a leap forward towards our shared mission of enabling creators to edit reality,” the post reads.

The tight team of three joins Ubiquity6 after what was generally a rough year for the consumer-focused AR industry. While the number of supported devices climbed, the actual user base didn’t see much growth. A lot of the progress came in the platform tools, such as Ubiquity6; the startup closed a $27 million Series B led by Benchmark and Index Ventures in August. The company now has just shy of 40 employees. 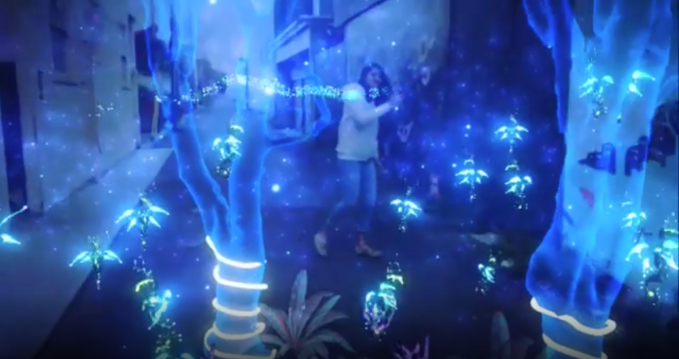 The Wavy app shares some essential DNA with what Ubiquity6 is looking to build. The app allows people to drop 3D objects into spaces and upload videos of the “music experiences” unfolding in front of them. It’s very fundamental stuff, but at its base level asks questions about how 3D content can interact with spaces and people and how those new environments change the context of the art and music.

This fits into Ubiquity6’s idea of a spatial internet, where users can stumble upon 3D environments where AR content lives based on where they are and what their phone camera is seeing. The company hasn’t launched widely, but had a pilot program with the SFMOMA last year and also announced they are working with Disney.

We chatted with Ubiquity6 CEO Anjney Midha at TechCrunch Disrupt SF 2018 about the opportunities and challenges that lie ahead for the consumer-focused AR industry.