Bringing Slope into the fold will enable Smartsheet users to share assets like video and photos natively inside the application, and also brings the ability to annotate, comment or approve these assets. Smartsheet sees this native integration through a broad enterprise lens. It might be HR sharing training videos, marketing sharing product photos or construction company employees inspecting a site and sharing photos of a code violation, complete with annotations to point out the problem.

Alan Lepofsky, an analyst at Constellation Research who specializes in collaboration tools in the enterprise, sees this as a significant enhancement to the product. “Smartsheet’s focus is on being more than just project management, but instead helping coordinate end-to-end business processes. Slope is going to allow content to become more of a native part of those processes, rather than people having to switch context to another tool,” he explained.

That last point is particularly important, as today’s collaboration tools, whether Slack or Microsoft Teams or any other similar tool, have been working hard to provide that kind of integration to keep people focused on the task at hand without having to switch applications.

Mike Gotta, a longtime analyst at Gartner, says collaboration that happens within the flow of work can help make employees more productive, but being able to build specific use cases is even more critical. “The collaboration space remains open for innovation and new ways to addressing old challenges. For organizations though, the trick is how to create a collaboration portfolio that balances broad-based foundational investments with the more domain-specific or situational scenarios they might have where this type of use-case driven collaboration can make more sense,” Gotta told TechCrunch.

That is precisely what Smartsheet is trying to achieve with this purchase, giving them the ability to incorporate workflows involving creative assets, whether that’s including all of the documents required to onboard a new employee or a training workflow that includes learning objectives, lesson plans, photos, videos and so forth.

Smartsheet, which launched in 2005, raised more than $113 million before going public last April. The company’s stock price has held up, gaining ground in a volatile stock market. It sits above its launch price of $19.50, closing at $25.24 yesterday. 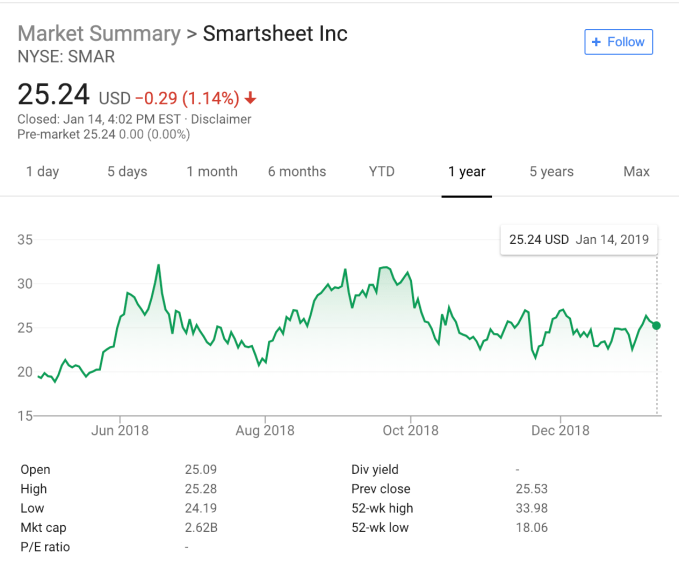 Slope was founded in 2014 and has raised $1.4 million, according to Crunchbase data. Customers include Microsoft, CBS Sports and the Oakland Athletics baseball team. The company’s employees, including co-founders Dan Bloom and Brian Boschè, have already joined Smartsheet.